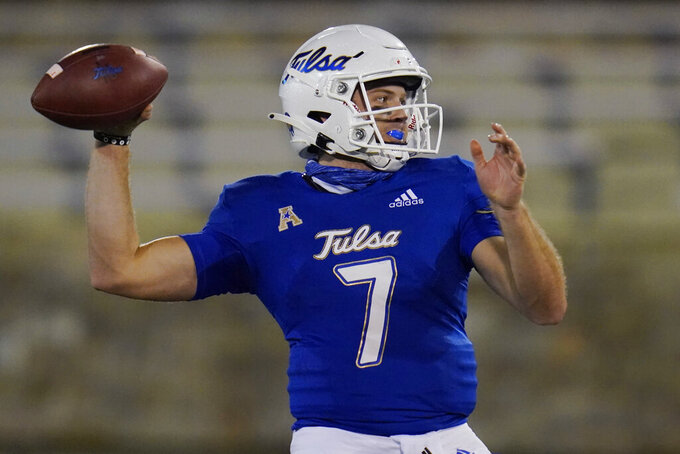 TULSA, Okla. (AP) — Falling behind early is becoming a regular occurrence for Tulsa. So are late-game heroics.

Zaven Collins returned an interception 96 yards for a touchdown in the second overtime to give No. 25 Tulsa a 30-24 comeback victory over Tulane on Thursday night.

“Words can’t really explain that one,” Tulsa coach Philip Montgomery said. “I’m just so proud of our young men. That is just a special group of guys down there. I don’t know that we played our best ball tonight, but we found a way to win. They are going to fight for 60 minutes, every second of it, and it took every second of it tonight.”

Playing its first game as a ranked team since 2008, Tulsa outgained Tulane 522 yards to 302, but turned the ball over three times. The Golden Hurricane trailed 14-0 entering the fourth quarter — the fourth game this season they have overcome a 14-point-or-more deficit to win.

Brin entered with 2:09 left in the third quarter after backup Seth Boomer was carted off the field because of a left leg injury. Starter Zach Smith left with a torso injury late in the first quarter.

“It’s been an unbelievable night,” said Brin, a redshirt sophomore who saw his first meaningful college action. “I’ve just prepared for the past three years and waiting on my opportunity to take advantage of it. I got that call and I knew that’s what I had to do and felt really confident about it.”

Brin completed 18 of 28 passes for 266 yards and two touchdowns. His 18-yard TD run with 9:17 remaining got Tulsa’s comeback started.

“Obviously, you don’t prepare for the third-team guy coming in,” Tulane coach Willie Fritz said. “We didn’t know much about him. I thought the young man came in and did a nice job.”

Corey Taylor II, carrying the ball for the first time in four games, gained 132 yards on 19 carries for the Golden Hurricane. Santana added eight receptions for 138 yards and the game-tying score.

Montgomery saids that Collins, who also sealed Tulsa’s come-from-behind 28-24 win last week over then-No. 19 SMU, should be considered for the Heisman Trophy.

“Unbelievable kid, unbelievable teammate, great leader,” Montgomery said. “Why is that guy not in the running for the Heisman? Tell me someone that has affected more games than that guy. I mean, if we want to talk about the best football players in college football, in my opinion, he’s there.”

Stephen Huderson ran for 106 yards on 25 carries for the Green Wave, including the contest’s first TD on a 5-yard run with 5:25 remaining in the third quarter. Larry Brooks had an interception and recovered a fumble for the Green Wave.

Fritz was frustrated by surrendering the Hail Mary touchdown pass.

“We work on that situation -- Hail Mary pass -- the day before the games,” Fritz said. “Obviously, we didn’t execute it very well. Poor coaching, poor execution. We just didn’t play very good down the stretch. We needed to make a play.”

Tulane: The Green Wave entered the game having scored at least 30 points in seven straight games, the first time they’d done that since 1998, but were shut out in the first half and scored a season-low 24 points. Marek Glover missed field goal attempts from 28 (in the first quarter) and 54 yards (in the second), but did connect on one from 39 yards out in the first overtime. Tulane entered the day averaging 404.3 yards per game and gained 277 in regulation and 302 overall.

Tulsa: The Golden Hurricane’s offense once again sputtered in the first quarter, although at least this time, they didn’t fall behind in the game, entering the second quarter tied 0-0. Tulsa gained just 58 yards of offense in the opening period, continuing its season-long trend of starting slow. The Golden Hurricane have scored just 12 points all season in the first quarter and average just 72 yards in their first quarters, while gaining an average of 119.4 per quarter in the other three.

With the dramatic victory, Tulsa, which hadn’t been ranked since it was No. 24 in the final 2010 season poll, should remain in the poll for at least another week and possibly move up a couple of spots.

Before coming out, Smith, who threw for 325 yards and three touchdowns in Tulsa’s big triumph over SMU on Saturday, completed 2 of 6 passes for 17 yards. Boomer completed 7 of 13 passes for 60 yards, along with an interception. Keylon Stokes, who caught three passes for 18 yards, also exited the game with an undisclosed injury early in the third quarter.

Tulane: Conclude their regular season on Nov. 28 at home against Memphis.