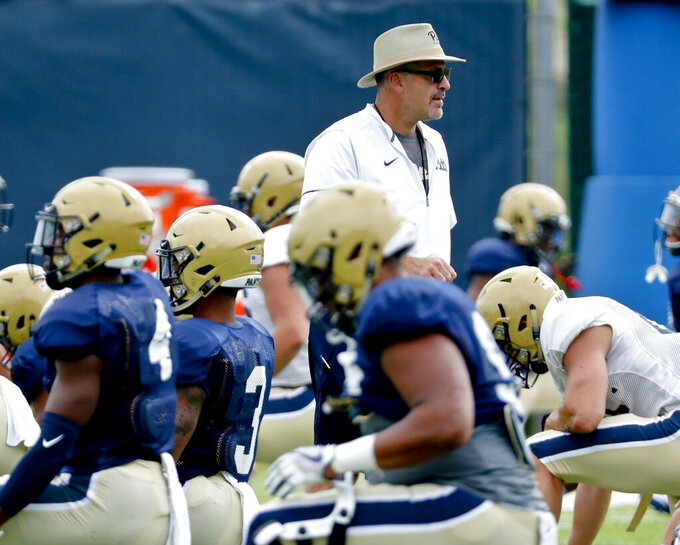 FILE - In this Aug. 9, 2018, file photo, Pittsburgh head coach Pat Narduzzi watches drills during an NCAA college football practice in Pittsburgh. Narduzzi shut down practice for a day last week when several players self-reported symptoms associated with COVID-19. All of them tested negative, but it provided an eye-opening insight into what coaching is like during a pandemic.(AP Photo/Keith Srakocic, File)

PITTSBURGH (AP) — In a different time, the way a number of Pittsburgh coach Pat Narduzzi's players felt when they woke up last Thursday morning would not have been overly alarming.

Headache. Body ache. When the players self-reported the symptoms as they've been instructed in the age of the COVID-19, Narduzzi immediately went into high alert. He told the affected players to call the trainer immediately. He canceled practice, addressed the athletes already at the team's practice facility by position group and ordered them back to their apartments without so much as taking a shower.

“So it scares you,” Narduzzi said Monday. “You’ve got to be safe. Poof. Shut it down.”

It turned out to be a false alarm. The players tested negative for the novel coronavirus. Turns out their issues instead were the typical after-effects of the first padded practice of training camp. During any other August, their issues would have been a blip. Not this August.

Welcome to coaching in a pandemic.

“It’s only practice," said Narduzzi, whose team returned to workouts last Friday following a one-day pause. "The calendar changes. You’re just doing what you need to do from there.”

The 54-year-old Narduzzi, a creature of habit like most of his brethren, is doing his best to adapt. He has stopped trying to predict what will or won't happen. It's useless. The best he can do right now is provide some structure to his players and hope they're following the protocols as best they can. Earlier this month he touted a 22-day stretch without a positive COVID-19 test. He declined to do that on Monday, instead saying simply that the team is on an impressive winning streak.

It's telling of the volatile state of organized sports that what looked like a potential outbreak was met not with panic but a relative shrug from the Panthers.

“I wouldn’t say surreal just because this whole process has been insane,” redshirt freshman quarterback Joey Yellen said. “But I thought we handled it really well. I thought we were really cautious with what we did. He sent everyone home and stuff. We kind of just played it by ear at that point. Took the day off and were able to come back the next day.”

That nearly Zen-like approach is one of the reasons Narduzzi is optimistic the Panthers and the rest of the Atlantic Coast Conference can forge ahead with a season while conferences like the Big Ten and the Pac-12 sit out. He praised his players for embracing the ACC guidelines. He also scoffed at the idea of the NCAA having any say in what plays out in a Power Five conference.

Narduzzi said he's not afraid of his players getting sick while they're together. The players fill out a four-question survey on an app each morning, with the results then sent to the coaching and training staff. If they don't feel well, they are advised to avoid the practice facility and wait for further instructions. Narduzzi only grows anxious when his players head back to campus.

“I told them the other day is what I’d like to do is put them in the indoor (facility), line up mattresses around the place and we just bunk right there,” he said. “Take doors, shut’em, lock’em up and not let’em out and keep them in our little paradise down here.”

He's kidding, but only a little. The worry about what happens when the Panthers begin in-person classes on Aug. 24 is real.

“I’m concerned when school starts,” Narduzzi said. "That’s my concern. Got to keep them away and make sure they don’t get the cooties.”