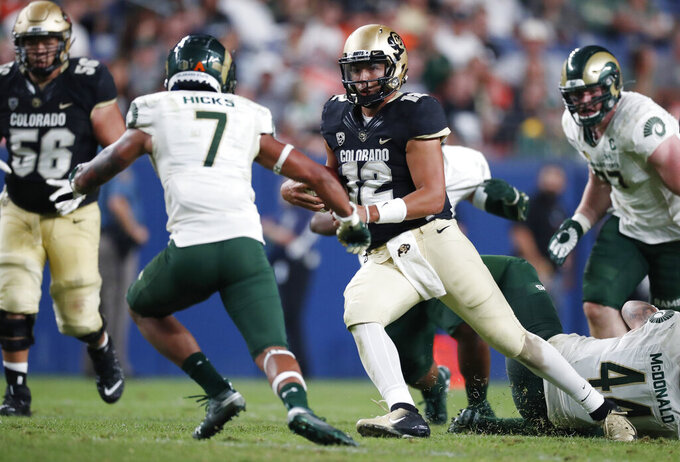 DENVER (AP) — Mel Tucker's debut as Colorado coach was a success in part because his defense created four turnovers.

The real takeaway was this: The Buffaloes still have work to do.

"Winning is good," Tucker said. "We've got a ways to go before I can say that's the type of football team that we want to have."

"This is a starting point," Tucker said after a game that lasted 3 hours, 19 minutes and featured a 37-minute lightning delay before the opening kick. "I'm looking forward to getting this film watched and getting these corrections."

Fontenot finished with 125 yards rushing to help the Buffs win their fifth straight over the Rams in what was the final Rocky Mountain Showdown held in Denver. The 83 combined points were the most in the rivalry's 91-game history.

Tucker was hired in December after serving as defensive coordinator at Georgia. He appreciated all the turnovers. He didn't appreciate allowing 505 total yards.

"The yardage and some of the plays we gave up, I'm not happy about that," he said.

Fontenot broke out of several tackles on a 22-yard run with 9:16 remaining to give the Buffaloes a 45-31 lead. Jonathan Van Diest helped seal the win by sacking Collin Hill, who fumbled the ball. Mustafa Johnson scooped it up and scored from 9 yards.

Colorado figured the player wearing jersey No. 2 would make a couple acrobatic catches. He did, too — Onu, who shares the same number as standout receiver Laviska Shenault Jr.

The turning point in a close game was the first play of the second half when Colorado State's Marvin Kinsey Jr. fumbled the ball. Three plays later, Fontenot scored from 7 yards out to make it 31-21.

The fumble infuriated Colorado State coach Mike Bobo, who felt the play should've been stopped. He wasn't pleased with the officiating crew being from the Pac-12, either.

"It's hard to beat anyone when you turn the ball over four times."

Rams freshman receiver Dante Wright made an instant impact. His first career catch went for a 39-yard touchdown in the first quarter and he later scampered 41 yards for a score.

To no one's surprise, Colorado State kept close tabs on Shenault. All he did last season against the Rams was catch 11 passes for 211 yards and two scores.

Shenault made a big impact late in the first half when he blew by cornerback Rashad Ajayi and caught a 25-yard TD pass to give the Buffaloes a 24-21 lead. It was a rough first half for Ajayi, who was called for two pass interference calls while trying to cover Shenault.

Onu did the number worn by Shenault proud with a juggling interception in the end zone during the first half.

"It was a huge stop for us," said Onu, a graduate transfer from Southern Methodist. "I was happy to make the play."

A rivalry that's been played in Denver the last 10 years will move to the Colorado State campus next season. Then, the two schools take a brief break before resuming a home-and-home series in 2023 (Boulder) and '24 (Fort Collins). The plans get a little murkier after that, with a tentative home-and-home series set for '29 and '30 along with '33 and '34.

There are no current arrangements to bring the game back to Denver.

Colorado: The defense remains a work in progress. But the offense was rolling behind senior quarterback Steven Montez, who threw for 232 yards and two scores.

Colorado State: Rams coach Mike Bobo falls to 0-5 against Colorado. ... Hill had a big night by throwing for 374 yards and three TDs.

Colorado State receiver Warren Jackson caught his seventh career TD pass in the second quarter. All of his scores have been away from Fort Collins.

Broncos running back and former Colorado standout Phillip Lindsay attended the game. So did Hall of Fame cornerback Champ Bailey, whose son Keevan Bailey is a defensive back for the Rams.

Colorado State plays at home against Western Illinois on Sept. 7.