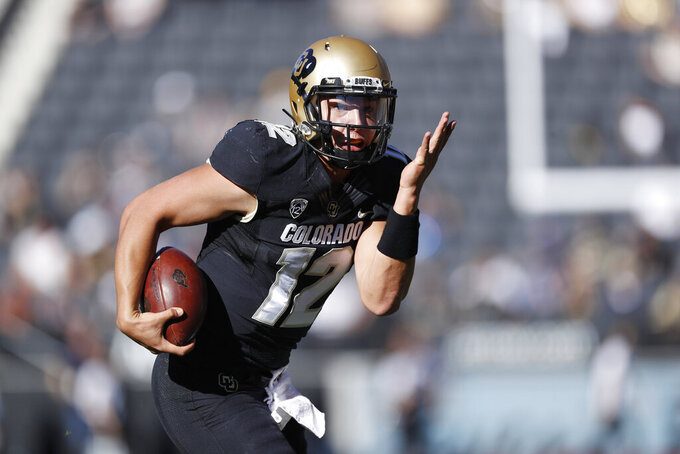 Colorado quarterback Steven Montez runs for a touchdown against Stanford in the first half of an NCAA college football game, Saturday, Nov. 9, 2019, in Boulder, Colo. (AP Photo/David Zalubowski)

BOULDER, Colo. (AP) — Steven Montez needs one touchdown pass Saturday in his final appearance at Folsom Field to break Colorado's school record of 60 that he shares with Sefo Liufau and Cody Hawkins.

He's also 316 yards of total offense away from surpassing Liufau's benchmark set in 2016.

The only thing the senior passer wants to break Saturday night is Washington's stranglehold on the Buffaloes. Colorado (4-6, 2-5 Pac-12) hasn't beaten the Huskies (6-4, 3-1) since 1996, the year before Montez was born.

"Win," Montez said when asked what he wants to accomplish down the stretch. "Win, that's really the most important thing to me. I could go out there and throw for zero passing yards, and if we won, I really wouldn't care.”

To gain bowl eligibility, the Buffaloes would have to beat Washington and No. 7 Utah, a tall task given all their injuries — they've started 38 players because so many starters and even their backups have gotten hurt.

Beating Washington "would be huge for us and it would show that we're taking steps in the right direction, if not for this year, definitely for next year, and for the guys coming back," Montez said.

Montez, at least, will get one more game. Last week he accepted an invitation to play in the East-West Shrine Game, one last chance to show his skills for NFL scouts.

"The season is not over yet, so I really haven't had time to sit back and take it all in," Montez said. "I've definitely thought about how long I've been here, and it's definitely been an absolute blessing that Coach (Mike) MacIntyre and that staff that used to be here gave me an opportunity to come play for the University of Colorado and I'll be forever grateful for that. Coming out of El Paso, I wasn't very highly recruited, and they saw something in me.”

First-year Colorado coach Mel Tucker said he was fortunate to have Montez as his quarterback this season because he's both a leader and a willing listener.

“I just wish I had more time with him, I really do,” Tucker said.

The last time Washington was on the field two weeks ago, its offense rolled up more than 400 total yards but managed just 19 points in a victory over Oregon State. QB Jacob Eason was just 16 of 32 passing for 175 yards and threw two interceptions — one of which was returned for a touchdown. Eason wasn't helped by several dropped passes, continuing a season-long trend with his pass catchers. The Huskies know they should have a chance to get the offense sparked against the Buffaloes, who are giving up more than 300 yards per game through the air and nearly 5 yards per rush attempt.

Washington has made a point this season of getting off to quick starts. The problem has been closing out some games. The Huskies are outscoring opponents 107-13 in the first quarter. The win over Oregon State was just the third time in 10 games that the Huskies failed to score a first-quarter touchdown. But in its four losses, the fourth quarter has been an issue. The Huskies have been outscored 31-13 in the fourth — and 68-36 in the second half — of those four games.

Washington should be able to lean heavily on the running duo of Salvon Ahmed and Richard Newton. Ahmed rushed for a career-high 174 yards and two touchdowns against the Beavers and Newton returned from a foot injury that cost him three games with 54 yards on 17 carries. Ahmed needs 114 yards to reach 1,000 for the season. Ahmed and Newton have combined for 15 of the Huskies' 17 rushing touchdowns.

Colorado's live buffalo mascot Ralphie V makes her final public appearance Saturday at Folsom Field but won't run around the field. She'll live on a ranch like Colorado's previous retired buffaloes have done and Ralphie VI will be selected to replace her next year. Montez said he's not disappointed he won't get to run behind Ralphie onto the field one last time. “Whatever's in Ralphie's best interest, I think that's what's in everybody's best interest," he said. "She's ran out for a lot of games and she's loved by the fans, so if she says that she needs some downtime and some off time, then she's absolutely going to get it and we'll be happy about that."

By Ralph D. Russo 53 minutes ago
an hour ago
2 hrs ago
3 hrs ago
By John Marshall 3 hrs ago