Colorado regroups under interim coach with bowl on the line 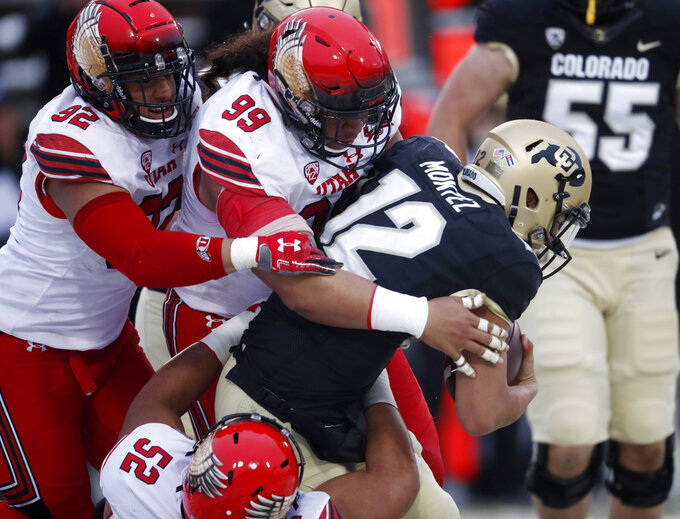 BOULDER, Colo. (AP) — No different than most days, Kurt Roper made his way over to the Colorado quarterbacks for practice.

Big difference from most days, the QB coach is now running the show on an interim basis after the firing of Mike MacIntyre .

One of Roper's first orders of business Monday was a brief team meeting to discuss the situation with MacIntyre, who was let go with three years left on his contract and with the team in a six-game skid.

"Really, what I tell them is this isn't about coaches. This is about these guys in the room," Roper said. "The expectations are unquestioned effort. That's what they will give us."

There's a motivational component, too — for MacIntyre, the 2016 AP coach of the year who led the Buffaloes to a 5-0 start before the wheels came off.

"What we do know for a fact is he'd want us to finish the season well," senior linebacker Drew Lewis said. "Ideally, we want to do it for him and I can feel for that. Just finish this last game with a win and secure the bowl game is the most he could ask for as far as us.

"He was never the stingy coach. When he was asked to leave, I bet you he wasn't pointing fingers or anything of that nature. He's definitely still hoping for the best for us. We know he's going to be watching us and we're going to try to do it for him."

It's been a tumultuous weekend for the Buffaloes following their 30-7 loss to Utah on a snowy Saturday afternoon. A day later, athletic director Rick George informed MacIntyre he would not return and then met with the coaching staff and players. George appointed Roper as the interim coach.

Roper's task is injecting some energy into a skidding Buffaloes team in hopes of salvaging a soured season.

"The first five games was really an enjoyable experience for the whole team. It bonded everybody together," Roper said. "The last six weeks have been tough. But I don't think that's been able to separate us. They've done a great job all year long."

Tailback Travon McMillian didn't so much sense a new sort of energy from the team Monday, only a renewed sense of purpose.

The rumors have been circulating about MacIntyre's job status since last week. All the outside noise has been difficult to weather, especially for receiver Jay MacIntyre, the son of Mike MacIntyre.

"I know that burden he feels is definitely heavy," Lewis said. "He said yesterday one thing that stuck with me, that this is the first time in all his years he's walked into that team meeting room and his dad wasn't there. That hit home. He's going through a lot right now. We're all doing a really good job of sticking up for him."

This could be an issue: Roper might not have his most trusted pupil Saturday in Berkeley. Quarterback Steven Montez left the Buffs' loss to Utah with a sprained right ankle. He's listed as day-to-day.

"He's a tough guy and obviously wants to play," said Roper, who spent a good portion of practice Monday with the QBs.

As for mending the emotions of his team, Roper cited the resiliency of players.

"What happened affects everybody differently," Roper said. "The good thing about this 12th opportunity is it gives us a chance to have a 13th opportunity. We want to go play a really good game against Cal and hopefully extend our season if we can play well."