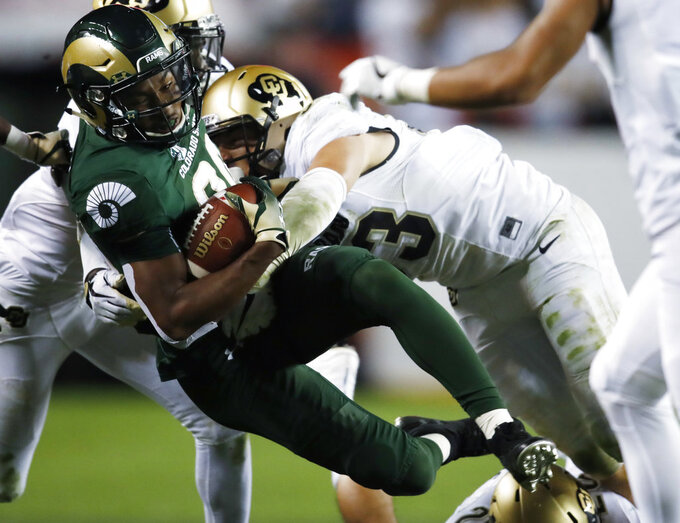 The Colorado Buffaloes' star inside linebacker was named the Pac-12's defensive player of the week after he collected 16 tackles and an interception in a 45-13 rout of Colorado State in his first career start last month.

The 6-foot-3, 235-pound sophomore from Danville, California, had an even better game the following week, recording 14 tackles in the Buffs' 33-28 win at Nebraska .

None was bigger than his stuff of running back Greg Bell on fourth-and-1 in the fourth quarter, and he capped his day with an interception on the Cornhuskers' next drive.

That performance earned him the Bronko Nagurski National Defensive Player of the Week honor.

He recorded his first sack in a 45-14 win over New Hampshire last week, and ran his tackle total to 34, double the number he had as a freshman.

"We saw glimpses of it last year and he had an excellent spring," coach Mike MacIntyre said.

Landman, who was born in Zimbabwe, where his father, Shawn, played international rugby, blocked a punt at USC and closed out his freshman season with eight tackles at Utah, two for a loss and two for no gain, and broke up two passes.

After spring ball, coaches awarded him the Dick Anderson Award for outstanding toughness.

"When he hits you, you know that 'The Hammer' just hit you," Colorado quarterback Steven Montez said. "He is a great defensive player and he is going to be a very special dude for us here this year and the coming years. We knew he was special after the blocked kick last year against USC and all of that. He is a very good player. He is a very physical player which is good, you need that on defense."

"About five days into fall camp, I said, 'We have to get him, Drew (Lewis) and Rick (Gamboa) on the field at the same time," MacIntyre recounted. "Matter of fact, I was walking up (to the Champions Center) after talking to the media after practice, and I'm walking up the hill thinking, 'I just said I was going to split time between them. Why would I do that? I need to get all three of them on the field.'"

So, he moved Lewis, who was a safety in high school, to outside linebacker on early downs and back inside in nickel packages.

Making room for Landman has made all the difference for the Buffs (3-0), who have a bye this weekend before opening league play against UCLA (0-3) on Sept. 28.

"Drew is a good enough athlete that he can (switch positions) and it opens up our defense having Drew play outside linebacker," MacIntyre said. "We can do a couple more things coverage-wise with him because he can run so fast and he's so athletic. Then bringing him off the edge, he brings speed.

"We have some really good outside linebackers. A lot of times we have a kid that runs a 10.5 (100-meter dash, Davion Taylor) and a kid that runs a 4.4 (40-yard dash, Lewis) that both weigh 220 pounds and are close to 6-2½ coming off the edge, that's a lot of speed out there, with Nate and Rick inside. I think that helped our defense."

MacIntyre said it wasn't hard to persuade Lewis, either.

"He was fine with it and he knew it would help our football team if he and Nate were on the field at the same time," MacIntyre said. "It's all about our team winning and they'll make a lot of plays before the year's over."

With more playing time, Landman has been even more of a playmaker, setting the tone by shutting down runs.

His best stop came in the fourth quarter against Nebraska.

"We knew that was going to be a big play in the game. We had a stunt on. Where the ball actually hit wasn't my gap. We tell our guys to go make a play. It's football, you can't always do the right thing every time. Our D-line had great penetration. They moved the offensive line back. I found a run through, and being fourth down, there can't be any hesitation," Landman said.

"I just went full speed. I didn't even wrap up, I was just downhill. Everything kind of went blurry and I was just gone. To see the crowd and our Buffalo fans go wild, I knew we made the stop. That was a great feeling."