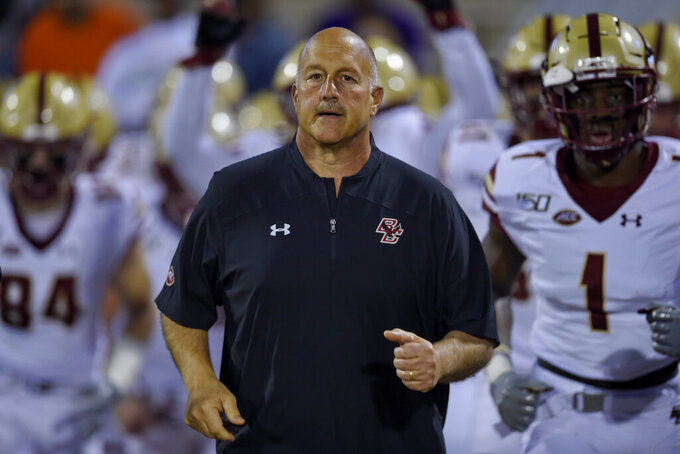 FILE - In this Oct. 26, 2019 file photo Boston College head coach Steve Addazio leads his team onto the field before the start of an NCAA college football game against Clemson in Clemson, S.C. Colorado State has hired Addazio as its head football coach. Addazio wasn't out of work long after being fired by Boston College on Dec. 1. He was 44-44 in seven seasons with the Eagles. The 60-year-old steps in for Mike Bobo, who resigned last week after reaching a financial settlement with Colorado State. Bobo is now the offensive coordinator at South Carolina. Addazio inherits a Colorado State team that is coming off a second straight losing season. (AP Photo/Richard Shiro)

One of the criteria Colorado State had for its next football coach was experience.

The Rams checked that box with the hiring of Steve Addazio.

Addazio agreed to a five-year contract Wednesday, with a base salary of $1.5 million in the first year and with a $50,000 increase each year of the deal.

The 60-year-old Addazio wasn't out of work long after being fired by Boston College on Dec. 1. He was 44-44 in seven seasons with the Eagles.

Addazio replaces Mike Bobo, who parted ways with the program last week after reaching a financial settlement with Colorado State. Bobo is now the offensive coordinator at South Carolina.

At Colorado State, Addazio inherits a team that is coming off a second straight losing season.

"Our program will be one built on toughness and passion, and we will work tirelessly to develop men of character to return championship-level football back to Colorado State," Addazio said in a statement.

Boston College won seven games in five different seasons under Addazio. The Eagles became bowl-eligible this season by beating Pittsburgh in their final regular-season game. But Addazio never restored the luster to a program that frequently was ranked in the AP Top 25 in the early 2000s.

Before arriving at Boston College, Addazio was in charge for two seasons at Temple. And before that, he was an assistant coach on Florida teams that won national championships during the 2006 and ‘08 seasons. While at Florida, he worked with Urban Meyer, who’s been seen around Colorado State athletic director Joe Parker during the hiring process.

“Throughout his career, Coach Addazio has been committed to the holistic development of student-athletes and of the programs he has led,” Parker said. “He has focused on crafting cultures where his students thrive on the field and in the classroom. We look forward to Coach Addazio leading our football team as we strive to be the preeminent program in the Mountain West.”

One of the first orders of business for Addazio at Colorado State will be turning around the team's fortunes against nearby rivals. The Rams were 2-13 versus Colorado, Air Force and Wyoming under Bobo. The team opens next season by hosting the Buffaloes.

Addazio has a state-of-the-art stadium as a selling point to recruits. The on-campus football field opened on Aug. 26, 2017, with a Rams win over Oregon State in front of 37,583 fans.

“Steve Addazio is a great recruiter, a better coach, an even better leader, and most importantly a better person,” former Boston College athletic director Brad Bates said. "I am very excited for the Colorado State family and the future of Ram football.”

While at Boston College, Addazio saw several of his players get drafted into the NFL, including defensive back Justin Simmons by the Denver Broncos (2016, third round).

"He is a great leader of men, and his knowledge of the game is like none other!" said Maurkice Pouncey, a former Florida offensive lineman who was a first-round draft pick by Pittsburgh in 2010.