Colorado State, Vandy regroup after both lose to FCS teams 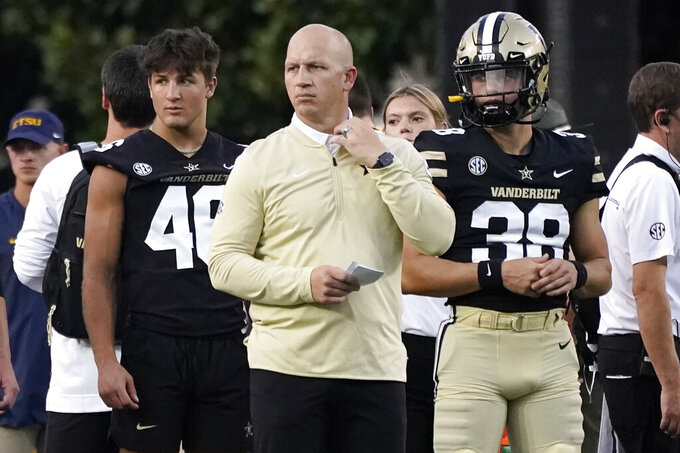 Here's the upside: One will feel a little better after Saturday.

The Rams are nearly a touchdown favorite, according to FanDuel Sportsbook, against a Commodores squad that’s seeking to end an 11-game skid.

Really, though, it's more of a coin flip given the way they played in their respective openers.

Colorado State made small miscues that added up in a 42-23 home loss to South Dakota State. Vanderbilt was mistake-prone in a 23-3 home loss to East Tennessee State.

Both coaches echoed the same sort of thoughts heading into game No. 2.

Said second-year Colorado State coach Steve Addazio: “I want to see an intensity, an attitude intensity, because you know why? We’re never going to accept losing in this football program. Ever. You have to learn how to win."

Colorado State (Mountain West) and Vanderbilt (Southeastern Conference) don't know all that much about each other. The two have never met on the football field. It’s just the third time a squad from the SEC has paid a visit to Fort Collins.

“If you make a bunch of mistakes in camp and you make a bunch of mistakes in the game, well, you didn’t get them corrected in camp,” Addazio said. “But in camp, when you’re firing at a pretty high level and then you come out here, I mean, we went the wrong way up front on offense several times. The wrong way. ... That happened. Hard for me to explain that to you, but it happened.”

Lea knows the feeling after his team fell to ETSU, which took advantage of three turnovers.

“We got East Tennessee State’s best shot and our game wasn’t on enough to handle that and counter punch,” Lea said. “This is a part of us becoming a sustained, competitive program that’s going to win at the highest level. It’s a challenge, but it’s also a great opportunity for us.”

Lea said sophomore Ken Seals will start again at quarterback despite a rough finish last weekend. Seals turned the ball over three times in the fourth quarter against ETSU, losing the ball when dropping back to pass in what became a TD for the defense. He also had two interceptions, including one that was returned 99 yards for a touchdown only to be wiped out by a celebration penalty.

“This is going to continue to be finding that rhythm between the two and how we put pressure on the opponent,” Lea said.

This will be the first game the Commodores have played in the state of Colorado since Nov. 17, 1979, when they traveled to Air Force. The Commodores lost, 30-29.

The Rams plan to ramp up the running game after averaging 3.1 yards per rush. This after quarterback Todd Centeio set career highs in attempts (42), completions (29) and yards (304).

“We get that run game right, we’re going to have one of the better offenses around,” Addazio said.