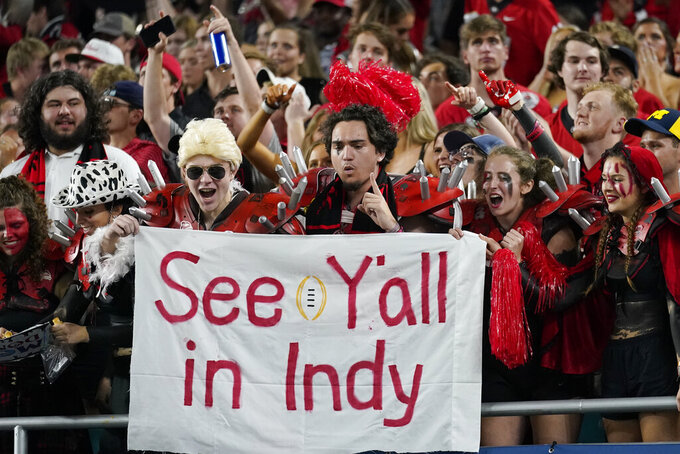 The administrators responsible for managing the College Football Playoff appear to be at an impasse when it comes to expansion. Nobody is against growing the current field of four, but they now seem to be entrenched in opposing positions regarding how and when.

The CFP's management committee, comprised of 10 conference commissioners and Notre Dame's athletic director, have 10 hours blocked off for meetings Saturday and Sunday in Indianapolis to discuss a new format for deciding a champion.

The 12-team playoff proposal on the table looked like a lock to be approved by now when it was unveiled in June. That would have cleared the way for it to be implemented in 2024.

Instead, provincialism and distrust have short-circuited the work. Nobody in the room appears capable of bridging the divides so collectively the group can do what is best for college football. It should also be noted that nobody has actually been empowered to do just that.

“I will be very pleasantly surprised if we make it to the finish line,” Big 12 Commissioner Bob Bowlsby told AP about this weekend's meetings.

If they don't, early expansion could be dead and attention instead turn to what comes after the current agreement expires —- when the same sticking points will still exist, but the opportunity to make an additional half-billion in revenue before 2026 will not.

Bowlsby was part of the four-person subcommittee that started working on CFP expansion in 2019. If not for the pandemic, expansion would probably have been approved in 2020.

As time passed and conferences changed commissioners, the dynamics of the group changed, too.

New leaders in the Big Ten, Atlantic Coast Conference and Pac-12 were leery of the strategy of going public with the expansion plan before details could be worked out. Then the SEC's plans to add Texas and Oklahoma became public in July and skepticism grew.

“Candidly, given everything that’s been said publicly, looks like we are stuck at four for a while,” Pac-12 Commissioner George Kliavkoff said Wednesday in a radio interview with 750 The Game in Portland, Oregon.

Big Ten Commissioner Kevin Warren said he wants only Power Five conference champions to receive automatic bids to the playoff. It’s an odd stance for the leader of a league whose past results suggest would never have a problem getting its champ into a 12-team field.

The Group of Five conferences, and especially American Athletic Conference Commissioner Mike Aresco, are against that 5+1+6 model, and prefer the original proposal's guaranteed spots for the CFP's six highest-ranked champions, regardless of conference.

ACC Commissioner Jim Phillips remains concerned about bypassing eight and expanding to 12, which creates issues with the academic calendar and length of season.

Southeastern Conference Commissioner Greg Sankey has made clear it's 12 or four for the SEC.

"I feel prepared to show up and contribute to a decision, yet I’m not certain if everybody’s going to be in that frame of mind,” Sankey told SiriusXM's SEC Radio this week.

If the SEC had its way, there would be no automatic bids for league champs and all 12 spots would be at-large. A predictable position for a conference that for the second time in five years has two of its teams playing the national championship with Alabama and Georgia settling things Monday night in Indianapolis.

Notre Dame would prefer 12 over eight, too. A bigger field makes it easier for the Fighting Irish to remain independent, which might explain why the ACC is holding out hope for eight as a way to nudge Notre Dame football into the league.

Kliavkoff and the Pac-12 would like to protect the Rose Bowl, the conference's lucrative longtime partner. But the newest commissioner appears ready to jump on board with any version of expansion after his conference missed out on the CFP for the sixth time in eight years.

Kliavkoff has also suggested the Power Five could cut the other five conferences out of the playoff decision-making process when the current 12-year agreement runs out after the 2025 season. Currently, consensus among all 11 CFP signatories is required to change the format but the next deal doesn't have to be so inclusive.

Unsurprisingly, the Big 12's Bowlsby supports the 12-team plan he helped create. Despite facing uncertainty with the future status of his changing conference, Bowlsby seems more dedicated than any of the major players to looking at the big picture.

But there doesn't appear to be enough trust among the group for a voice from within to broker a compromise.

What is needed in these negotiations is someone without territory to protect. A person who has been empowered not to make unilateral decisions but to build consensus among competitors — because that's what these conferences are.

That kind of collaborative leadership has always been hard to come by in major college football, and once again it stands in the way of progress.