Column: Shame on college football for lack of black coaches 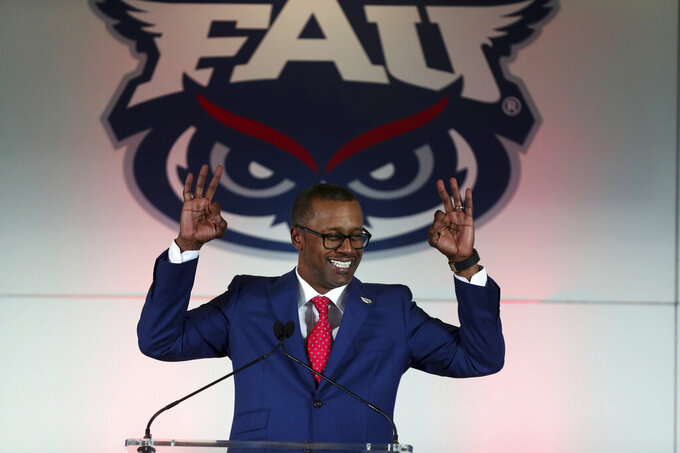 FILE- In this Dec. 12, 2019, file photo, former Florida State coach Willie Taggart is introduced as Florida Atlantic University's new football head coach during a press conference in Boca Raton, Fla. Colleges around the country finished off their football signing classes this week, proudly touting scores of African-American athletes as their next big stars. A review of all 130 FBS schools found shockingly low numbers, with blacks still largely shut out of head coaching positions and even more so the prime coordinator spots. (Carline Jean/South Florida Sun-Sentinel via AP)

Colleges around the country wrapped up their football signing classes this week, proudly touting scores of African-American athletes as the next big stars.

It's a whole different situation on the sideline.

Segregation still rules the coaching ranks. And not just the top guys.

A review of all 130 Football Bowl Subdivision schools found shockingly low numbers, with blacks still largely shut out of head coaching positions and, to an even greater degree, the prime coordinator spots.

While the NFL has come under fire for its lack of minority coaches, the situation appears more dire at the college level.

Frankly, there's little reason to believe the sport will ever become more inclusive beyond the field, even though roughly half the players are African-Americans.

“College coaches are expected to fund-raise and schmooze with alumni as well as coach,” said Mark Naison, a professor of African American Studies and History at Fordham University. “The rich alumni, most of whom are white, feel more comfortable with people who look like them. So long as alumni dollars drive college football funding, white coaches will have a huge hiring advantage. ”

This much is clear:

— Blacks rarely get a chance to shine at the most prominent schools.

— Blacks generally get a shorter time-frame to prove their coaching skills.

— Blacks find it more difficult getting a second chance if things don't work out in their initial jobs.

At college football's top level, there are 13 African-American head coaches at FBS schools, down from 15 two years ago and roughly in line with the NFL's puny numbers (three out of 32).

The rates are downright alarming when it comes to offensive and defensive coordinators, who make up the prime pool of candidates for future head coaching jobs.

Only seven FBS schools have an African-American running the offense, while four others have black coaches who carry the co-coordinator title. Those numbers are especially troubling in today's world of high-scoring spread offenses, which means those calling the plays are often the hottest coaching prospects.

The minority numbers are higher on the defensive side of the line, but still show an appalling lack of diversity. There are 16 African-American coordinators, with another six black coaches listed as co-coordinators (including job-sharing between two coaches of color at both Arizona State and Charlotte).

Amazingly, Rice is the only FBS school that has African-Americans in both coordinator spots. Jerry Mack is in charge of the offense and Brian Smith runs the defense for head coach Mike Bloomgren, who is white.

The Pac-12 has the greatest head coaching diversity of any conference, with African Americans holding five of 12 positions. There are three black head coaches in the 14-team Big Ten.

In fact, the only coordinator of color in the entire Big 12 is Kasey Dunn, who is biracial. He was recently promoted to run Oklahoma State's offense next season.

Among the next tier of schools, known as the Group of Five, the numbers are more minuscule. Just three of 65 head coaches are African-American: Jay Norvell at Nevada (Mountain West), Thomas Hammock at Northern Illinois (Mid-American) and Willie Taggart at Florida Atlantic (Conference USA).

There are no black head coaches in the American Athletic Conference or the Sun Belt.

Norvell spent 31 years as an assistant coach, going through countless interviews for head coaching jobs, before Nevada finally gave him a chance at age 53.

After enduring a 3-9 mark in his inaugural season, Norvell guided the Wolf Pack to bowl appearances the last two seasons.

“Most schools interview a minority candidate,” Norvell told the Reno Gazette Journal shortly before his first game in 2017. “A lot of times I felt like I was that guy, the guy they had to interview, and at the end of the day they weren’t really serious about hiring me."

That has become a familiar complaint regarding the "Rooney Rule," the NFL's ballyhooed but deeply flawed attempt to bolster minority numbers in the coaching ranks.

Pro teams are required to interview at least one minority candidate for head coaching jobs, but it's clear that many teams are simply going through the motions with the intention all along of hiring a white coach.

There is no such rule at the college ranks, not that it would likely do any good.

Norvell can attest to that. He took part in plenty of sham interviews before someone finally looked at him as a legitimate prospect.

"That becomes frustrating as a candidate because you don’t want to go through the process unless you’re being taken seriously," he said. "There were several of those I went through, but we just have to keep pushing.”

The most prominent schools are even less inclined to put a black coach in charge of their program. There are exceptions — Tyrone Willingham at Notre Dame, Charlie Strong at Texas, Taggart at Florida State — but African-Americans usually face huge obstacles when they land a head job.

The most glaring example is at Vanderbilt, where Mason has little chance of seriously competing in the mighty SEC. The Commodores have just managed just seven winning seasons over the last 60 years.

It's not a unique situation.

When Mel Tucker took over a year ago at Colorado, the Buffaloes were mired in a stretch of just one winning mark in 13 seasons. Babers was handed a Syracuse program that had managed only three winning seasons in its previous 14 years, which was exact same predicament that Lovie Smith faced at Illinois. Mike Locksley was hired by Maryland in the tragic aftermath of a player's death. James Franklin arrived at Penn State just two years removed from the Jerry Sandusky scandal.

Also, there are notable examples of black head coaches getting less time to prove themselves than their white counterparts.

Willingham was fired by Notre Dame after just three seasons even though his winning percentage was on par or slightly better than Gerry Faust, Bob Davie and Charlie Weis, white coaches who all got five-year stints before they were dismissed.

Taggart admittedly had a miserable run at one-time powerhouse Florida State, but it's hard to envision a white coach — no matter how poor the results — getting dumped after just 21 games.

Beyond that, a December report by fivethirtyeight.com found only seven cases since 1975 where an African American received a second chance to be a head coach at a top-division school after being fired from his first job. (It's now eight with Taggart's hiring by Florida Atlantic, though admittedly that's a big step down from the Seminoles.)

When Jon Embree was fired by Colorado in 2012 after just two seasons as the head coach, he knew he'd never get another opportunity to run an FBS program. Since then, he has settled for staff jobs in the NFL, currently serving as assistant head coach for the NFC champion San Francisco 49ers.

“I understood that when I took the job.” Embree said shortly after getting the boot by his alma mater. "People can get mad all they want, but those are the facts. We don’t get second chances.”

Compare that with Todd Graham, who bolted from two of his head coaching jobs after only one season — which should've raised some red flags — and was fired by Arizona State in 2017.

Career over? Hardly. He recently landed the top job at Hawaii, which become the fifth FBS school to hand him the keys to its program.

Graham, of course, is white.

College football, have you no shame?

The story that moved Feb. 7, 2020, has been corrected to show Todd Graham coached at Arizona State instead of Arizona. With AP Photos.

Paul Newberry is a sports columnist for The Associated Press. Write to him at pnewberry(at)ap.org or at www.twitter.com/pnewberry1963 His work can be found at https://apnews.com