Comeback Player of Year: Cancer survivor back for Kentucky 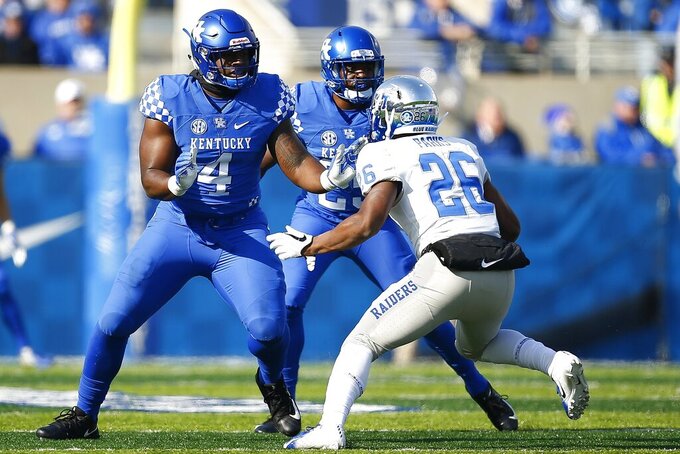 In this Nov. 17, 2018, photo, Kentucky NCAA college football defensive end Joshua Paschal (4) blocks against Middle Tennessee linebacker Wayne Parks (26) during a game at Kroger Field in Lexington, Ky. Paschal is a cancer survivor, having completed treatment in August, 2019, about a year after what he thought was a blister on the bottom of his foot turned out to be a malignant melanoma. Paschal is one of 30 nominees for the Mayo Clinic Comeback Player of the Year Award. (Alex Slitz/Lexington Herald-Leader via AP)

Paschal is a cancer survivor, having completed treatment in August, about a year after what he thought was a blister on the bottom of his foot turned out to be a malignant melanoma. More than just an inspiration to his teammates, Paschal is a starter and key contributor on the Wildcats' defense, leading the team in tackles for loss with five.

Paschal is one of 30 nominees for the Mayo Clinic Comeback Player of the Year Award. Winners will be chosen in FBS, FCS and non-Division I NCAA football, and revealed after the regular season in December. They will be honored at the College Football Playoff semifinal at the Fiesta Bowl on Dec. 28 in Glendale, Arizona. Associated Press college football poll voters will help choose the winners.

Among the other nominees announced so far:

— Memphis defensive back La'Andre Thomas, who returned from a nerve injury in his shoulder to be one of the most productive players on the Tigers' defense this season.

— Minnesota defensive back Antoine Winfield Jr., the son of the former NFL cornerback who suffered season-ending injuries each of the last two seasons.

— Oregon State quarterback Jake Luton, who is back leading the Beavers after a serious neck injury ended his 2017 season and an ankle injury limited him through most of 2018.

— Salisbury receiver Octavion Wilson, who returned to the field this year after a heart condition triggered other health issues that kept him away from the game for two years.

Paschal, a junior from Maryland, had surgery in the summer of 2018 to remove a growth on his foot. Initially, doctors believed it was benign. At a follow-up appointment, he learned otherwise.

"I was scared because the way did the doctors had said it was that it was at a depth where it could spread and it had exceeded that depth by a great amount," Paschal said.

Paschal needed a second surgery and then immunotherapy. Remarkably, he was able to return to the Wildcats in late November and participate in three games.

"I don't think I was anywhere near playing shape playing," Paschal said.

This offseason he was back to a somewhat normal routine of working out and preparing for this season, while still doing immunotherapy. In August, right before camp, he finished cancer treatments.

Wilson's ordeal started in 2015 after a promising freshman season at Division III powerhouse Mount Union. The chest pains he had tried to ignore turned out to be a symptom of pericarditis, an inflammation of the lining around the heart. The condition was treatable with medication, but, as Wilson puts it, his body kept fighting the heart condition even after it was gone. He started feeling numbness and pain in his arm and legs, but he went through his sophomore season at Mount Union in 2016.

In the spring of 2016, feeling his condition worsening, he left Mount Union and returned home to Delaware. In 2017, he was diagnosed with peripheral neuropathy. Wilson said there were days where it was challenging to simply move around and his outlook on life turned bleak.

"The way the doctor explained it to me was I was 20, 21, but my nervous system had aged or slowed to like three or four times my age," Wilson said.

Doctors told him there was no cure, only treatment.

In January 2018, Wilson said he woke up one day feeling better. The pain and numbness was gone — and it stayed that way.

He enrolled at Delaware Technical Community College to get his academics in order and then decided he wanted to play football again. He emailed schools within a few hours of his home and Salisbury University in Maryland showed the most interest. On a team that only attempts about 10 passes per game, Wilson has nine receptions for 79 yards for the unbeaten Sea Gulls (4-0).

"I thank God every day when I wake up," Wilson said. "You know, obviously, I want to win. We just beat a really good team Saturday. But when it really boils down to it, the doctors basically said I wasn't supposed to be back playing football or living how I'm living, and so I just I'm very thankful."