Coming off loss, Huskers look to rebound against FCS Fordham 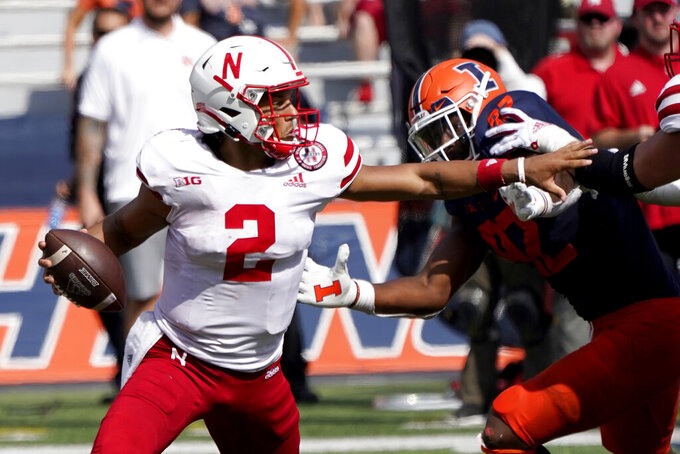 LINCOLN, Neb. (AP) — A favorite talking point of Nebraska players and coaches is that they are only concerned with their performance, and that every game is against a “faceless opponent.”

It doesn't get much more faceless than Fordham, despite its rather storied history.

“I have never heard of the team,” receiver Wyatt Liewer said.

The Rams will make the long trip from New York City for a Saturday matchup scheduled just four months ago when the Cornhuskers went looking for another September home date.

“I’m sure they are going to come in here and give us their best effort,” Liewer said. "I mean any team that gets to come into this stadium and play us is going to give us their everything, so we just have to show up and give them everything we got.”

Fordham is a 16,000-student Jesuit school in the Bronx that was an Eastern power during college football's golden age of the 1920s and ‘30s. The Rams dropped football in the 1950s, brought it back as a club sport in the ’60s and played at the Division III level before elevating the program to the Football Championship Subdivision (then I-AA) in 1988.

The game, which will be Fordham's opener, presents an opportunity for the Huskers to rebuild their confidence after Illinois handed them a crushing 30-22 defeat last week to begin coach Scott Frost's fourth season.

It's such a mismatch on paper that there is no betting line on FanDuel Sportsbook. But the Huskers, 12-21 under Frost, aren't in position to take any team lightly.

Linebacker Pheldarius Payne said the Huskers are eager to show their latest error-filled performance in Champaign won't define their season.

“It's a 12-game season, and we can turn around just in a matter of games,” Payne said. “Honestly, I forgot (the Rams) were FCS. I just looked at it as another opponent. We just have to go out there and earn our respect.”

Fordham's best-known player is the late NFL coaching great Vince Lombardi, who was a lineman on the famed “Seven Blocks of Granite” team in the 1936-37 seasons before his time with the Green Bay Packers. The Rams’ most recent wins over FBS opponents were against Army (2015) and Temple (2013). They have never played a game as far west as Lincoln.

Nebraska scrambled to rearrange its schedule after its trip to Ireland to play Illinois was canceled in February because of the pandemic. This Saturday originally was to be an open date to allow the Huskers to fully recover from traveling back from the Emerald Isle. With the Illinois game moved from overseas to Champaign, Nebraska saw no need for an open date so early in the season. The Huskers canceled their Nov. 13 game against Southeastern Louisiana and got Fordham to come to Lincoln for $500,000.

Nebraska will extend its NCAA-record sellout streak to 376 games thanks to two donors who swooped in to buy more than 2,000 unsold tickets and distributed them to disadvantaged youth. The streak was believed to be in jeopardy because of fan apathy after the Illinois loss, reluctance to go to the stadium amid the recent COVID-19 surge and the quality of the opponent.

RAMPING UP THE RUN

The Huskers should be able to establish their running game after failing to get much production against Illinois, other than Adrian Martinez's 75-yard touchdown.

The Huskers are 12-0 against FCS opponents, with their closest game a 31-24 win over McNeese State in 2014. Their most recent game against a lower-division team was a 45-9 win over Bethune-Cookman.