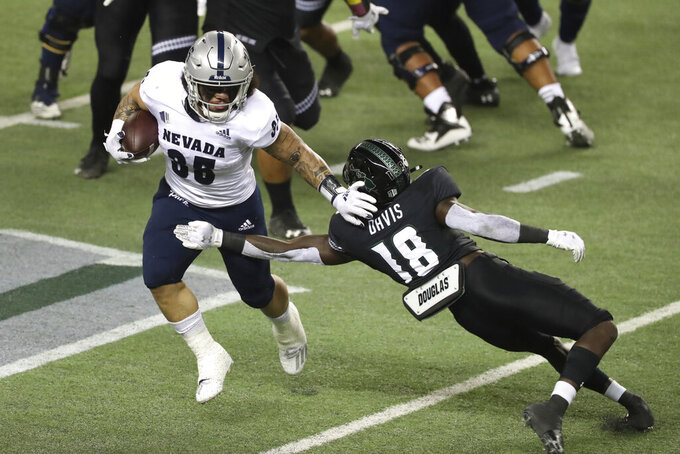 Nevada running back Toa Taua (35) brushes past Hawaii defensive back Cortez Davis (18) during the first half of an NCAA college football game Saturday, Nov. 28, 2020, in Honolulu. (AP Photo/Marco Garcia)

HONOLULU (AP) — Chevan Cordeiro passed for 246 yards and a touchdown and scored on a 2-yard run in the fourth quarter and Hawaii beat Nevada 24-21 on Saturday night.

Cordeiro was 26-of-32 passing without an interception and had 15 carries for 62 yards. Calvin Turner had 10 receptions for 77 yards and a TD for Hawaii (3-3 Mountain West Conference).

Carson Strong hit Cole Turner for a 4-yard touchdown to give Nevada (5-1) a 7-3 lead with 2:57 to play in the first half but Cordeiro led the Rainbow Warriors on an eight-play, 75-yard drive capped by his 7-yard TD pass to Turner less than two minutes later and Hawaii led the rest of the way.

Strong completed 20 of 25 passes for 168 yards and two touchdowns and Toa Taua 131 yards rushing and a score on 20 carries for the Wolf Pack.

Hawaii took a 10-point lead when its 10-play, 99-yard drive culminated with a 4-yard touchdown run by Miles Reed late in the third quarter. On Nevada's next drive, Taua scored on a 1-yard run, but the Rainbow Warriors answered with a 14-play, 75-yard to make it 24-14 on Cordeiro's TD run with 9:31 to play.

Tory Horton had an 18-yard scoring reception pulled the Wolf Pack within a field goal about four minutes later but Hawaii ran out the clock with an 11-play drive — including a 9-yard pass from Cordeiro to Turner on fourth-and-9 from the Nevada 26 — to seal it.