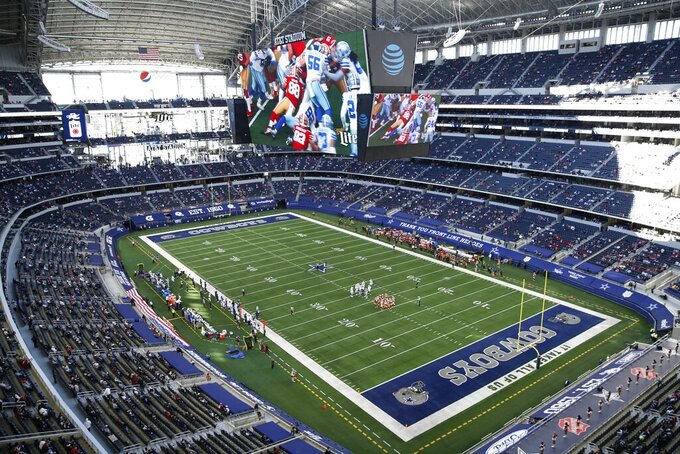 The San Francisco 49ers play the Dallas Cowboys in the second half of an NFL football game at AT&T Stadium in Arlington, Texas, Sunday, Dec. 20, 2020. (AP Photo/Roger Steinman)

ARLINGTON, Texas (AP) — Oklahoma is going right back to the stadium where the Sooners just won their sixth Big 12 championship in a row to play SEC runner-up Florida in the Cotton Bowl.

The only other time Oklahoma and Florida played each other was 12 seasons ago in the BCS title game that the Gators won 24-14 for their last national championship.

“That's why guys go to Florida and Oklahoma, to play in big-time games,” Gators coach Dan Mullen said Sunday. “This has been such a trying, crazy year for everybody. But it's awesome for these young men, that both schools, they've been able to persevere to get to this point, and finish out the season playing in this type of a game.”

The eighth-ranked Sooners (8-2) ended a three-year run of making the College Football Playoff even after winning another Big 12 title with a 27-21 win Saturday over Iowa State at the home stadium of the NFL's Dallas Cowboys. Oklahoma finished sixth in the final CFP rankings released Sunday, one spot ahead of Florida.

“We've had some pretty good memories over the last several years. Now is that going to make a difference in this game? I doubt it," Oklahoma coach Lincoln Riley said. “It's just going to be two good football teams going at it, like it should be. ... I guess if you've got to choose, having some good memories there is a good place to start."

During a Gators team meeting on Zoom to discuss their bowl destination, one of the first questions players asked Mullen was where the Cotton Bowl was played. Then they found out it was the home of the Cowboys, where Mullen has been a couple of times to watch Dak Prescott, his former quarterback at Mississippi State.

“I think everybody was pretty excited when they found out where we're going to play,” Mullen said.

Oklahoma is in the Cotton Bowl for only the third time, its first since a 41-13 loss to Texas A&M on Jan. 4, 2013. That was 11 years after the Sooners beat Arkansas when that bowl was still played in its namesake stadium near downtown Dallas.

Both the Gators and Sooners score just more than 41 points a game with big-play offenses. Florida averages 509 total yards a game, and Oklahoma about 476.

The Cotton Bowl will be played two days before Alabama faces No. 4 Notre Dame at AT&T Stadium in a CFP semifinal originally scheduled to serve as the 107th Rose Bowl in Pasadena. That game on Jan. 1 was moved, ostensibly based on the growing number of COVID-19 cases in the Los Angeles area, but also the ban on fans at spectator sports in California.

Riley is 44-8 in his four seasons as Oklahoma's head coach. Mullen is 29-8 in three seasons with the Gators since their former offensive coordinator returned after nine seasons as Mississippi State's head coach, a job he was transitioning to while preparing for that national title game 12 years ago.

Redshirt freshman Spencer Rattler, the fourth different quarterback for the Sooners to win a Big 12 title the past four seasons, has thrown for 278 yards per game. His 25 touchdowns are the most for a freshman QB and he has thrown seven interceptions.

Florida senior quarterback Kyle Trask is the NCAA's top passer at 375 yards per game with 43 touchdowns and only five interceptions.

“He's been impressive, a real impressive guy,” said Riley, who has coached quarterbacks who were two of the last three Heisman Trophy winners. “He's done a really good job of using the weapons. They have a tremendous scheme that really features what he does well.”

Pitts announced is turning pro and won't play in the Cotton Bowl. The 6-foot-6 junior had seven catches for 129 yards and a touchdown in the SEC title game, and caught 43 passes for 770 yards and a team-high 12 touchdowns in his eight games this season.

Tim Tebow was the Florida quarterback for the national championship win over Oklahoma on Jan. 9, 2009, in Miami. That was the season Sooners sophomore quarterback Sam Bradford was the Heisman Trophy winner, a year after Tebow won the award.