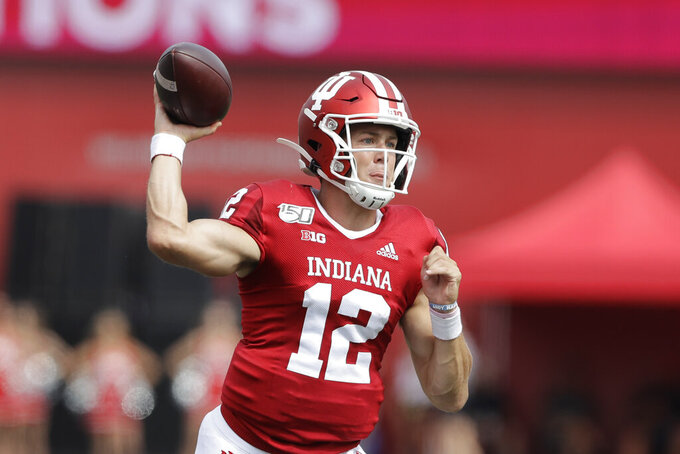 Now the Hoosiers must scramble to find a replacement.

Coach Tom Allen said Monday the four-year starter, captain and longtime blind-side pass protector will miss the rest of the season with a lower right leg injury. Cronk is expected to have surgery later this week and could return next season because he still has a fifth year of eligibility available.

"As much as I hurt for Coy, we're just — and he's the same way — he understands, somebody else has to rise up and take his place," Allen said during his weekly news conference. "Whoever does will have a great opportunity to be able to be tested against a tough environment, against a very really high level defense."

Cronk was injured in Saturday's victory over Connecticut when it appeared another player rolled up on the back of Cronk's leg, pinning it underneath him.

Almost immediately, Cronk removed his helmet and trainers placed an air cast around the injured leg. Teammates then jogged over and offered their support as the 6-foot-5, 325-pound offensive lineman was lifted onto a golf cart — a scene Allen said showed how much Cronk is respected in the locker room.

Following the game, Allen described it as an ankle injury. On Monday, he called it was an injured lower leg.

Either way, the timing couldn't be worse for Indiana (3-1, 0-1 Big Ten). This weekend, the Hoosiers resume conference play at No. 25 Michigan State (3-1, 1-0) which traditionally has one of the league's top defenses. This year is no exception with the Spartans ranked third in the league in total defense and second in run defense.

And the Hoosiers may need more than one body to fill a gaping hole left by a 40-game starter.

"We can move Caleb (Jones) to left tackle, which we did in the game and then DaVondre Love is in the mix there to play," Allen said. "Matthew Bedford, played him there in the fourth quarter and he'll be in the mix. Aidan Rafferty is a guy that's got to step up. So those three guys are really the three tackles in position to do that and to me, Caleb's going to have to be able to do both (left and right tackle)."

Bedford is a true freshman who enrolled in January and was listed No. 2 on Indiana's depth chart. Rafferty is a redshirt freshman, Jones has been starting at right tackle and Love is listed as Jones' backup.

Uncertainty about who starts at quarterback also could impact Allen's decision.

The right-handed Peyton Ramsey started the last two games in place of injured starter Michael Penix Jr., a left-hander. Allen has not provided many details on Penix's undisclosed injury, but the critical blind-side protection could shift depending on whether Ramsey or Penix starts.

"Really pleased with Peyton's play and the way he's led," Allen said. "Michael's been rehabbing and that's continued to go well and we'll find out more here throughout the week and then make a decision for that position on game day."

But the more immediate concern: is figuring will be finding a new left tackle.

"I just think it's a great opportunity for somebody to step up and take advantage of it," Allen said. "Obviously, we have the bye the following week so it gives us some more time to continue to get important reps. But all the focus right now is getting those guys ready to play against Michigan State."