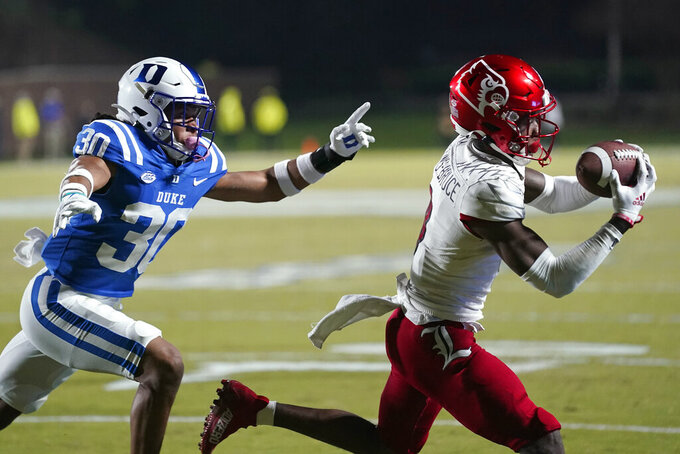 “I was feeling pretty bad throughout the week,” Cunningham said.

Cunningham shook off the illness and threw for five touchdowns – each to a different teammate -- and ran for two more scores. He racked up 303 passing yards and 224 rushing yards.

He’s the second Football Bowl Subdivision player with at least 300 passing and 200 rushing yards in a game. He sat out the final 12 minutes after 11 carries and 18-for-25 passing.

“I felt I could have done better,” Cunningham said. “I left a couple yards out there.”

Cunningham’s second-quarter rushing touchdowns went for 44 and 72 yards. He was running free through Duke’s secondary.

“I’ve been doing that since I was knee-high,” he said.

The Blue Devils sent defenders in droves to pressure Cunningham. He usually fled the pocket and wound up in open space.

“When Malik broke the line of scrimmage, there wasn’t anybody there,” Louisville coach Scott Satterfield said. “He had a calm about him, a great poise tonight. He let the offense come to him. But when it was time to shine, he did.”

Louisville scored on the game’s opening drive, picking up a fourth-and-1 from its own territory and then scoring on Cunningham’s short pass to Trevion Cooley that turned into a 48-yard play on third-and-24.

Cunningham hit wide-open Marshon Ford in the end zone for a 20-yard touchdown later in the first quarter. The next time the Cardinals got the ball, Cunningham ran 44 yards to the end zone on third-and-14.

“Nothing turned out really the way you want it to turn out,” Duke coach David Cutcliffe said. “Obviously some parts of it went from bad to worse.”

Quarterback Gunnar Holmberg, who missed the previous 1-½ games with an upper-body ailment suffered in the first half Nov. 6 against Pittsburgh, threw for 176 yards before exiting after one third-quarter series.

Duke’s Charlie Ham kicked first-half field goals of 22, 28 and 26 yards. The Blue Devils failed to score a first-half touchdown for the fourth time in their last five games.

Satterfield’s hometown is Hillsborough, which is about 15 miles away from Duke’s campus. The coach said in his youth he played rec ball about five minutes away from Duke's Wallace Wade Stadium.

But the most important aspect of the result came for his team, Satterfield said.

“I just love where our team is at right now,” he said. “There have been a lot of challenges and they’ve answered them.”

Louisville: The Cardinals are clicking down the stretch, setting new season-high point totals in each of their last two games. They drubbed Syracuse 41-3 on Saturday. Until winning twice in this six-day stretch, the Cardinals had been 3-9 in their previous dozen games in November.

“Since the beginning of the season, this is what we’ve been trying to do,” safety Qwynnterrio Cole said. “We finally put it together.”

Duke: The Blue Devils have yielded at least 45 points in each of their last five games. They’re assured of a last-place finish in the ACC’s Coastal Division.