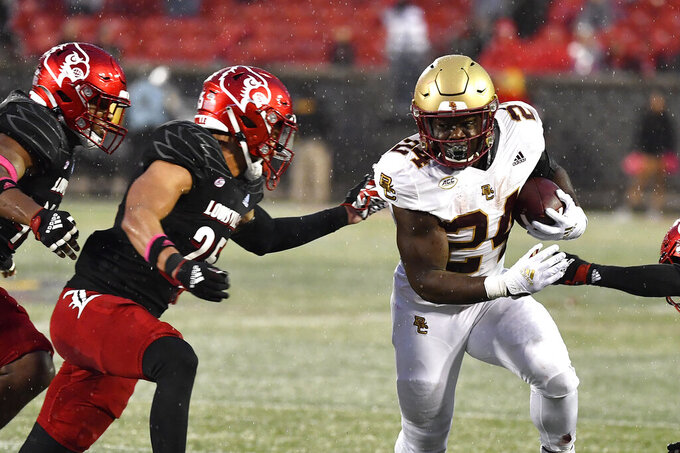 Boston College running back Pat Garwo III (24) attempts to get away from Louisville defensive back Josh Minkins (25) during the second half of an NCAA college football game in Louisville, Ky., Saturday, Oct. 23, 2021. Louisville won 28-14. (AP Photo/Timothy D. Easley)

Seeking a rebound coming out of a bye following consecutive losses by four total points, the Cardinals (4-3, 2-2 Atlantic Coast Conference) followed a BC touchdown with 21 unanswered points to take control before halftime, or so it seemed. They thwarted chances to pad their lead as Cunningham tossed two interceptions and Hassan Hall fumbled in between their TDs.

Even after Josh Minkins picked off BC's Dennis Grosel in the end zone midway through the fourth quarter to stop one serious threat, Louisville freshman back Trevion Cooley coughed it back up on the next play to set up the Eagles at the Louisville 30. BC took advantage on Jaelen Gill's 6-yard TD reception to get within 21-14 and make it interesting before Cunningham's run sealed a rain-soaked homecoming win.

“It came right down to the end there and we were able to close it out," Louisville coach Scott Satterfield said. "That was a big time run by Cunningham to get that last touchdown.”

Of course, the mobile quarterback had a couple before that.

Cunningham reached 2,000 career yards rushing and became the fifth Louisville player with at least 30 rushing TDs on a drive capped by his 1-yard run midway through the second quarter. Cunningham rushed 16 times for 133 yards, completed 9 of 17 passes for 107 yards and credited teammates for his success.

“I wouldn’t have the stats I have if it weren’t for the running backs and receivers blocking down field," he said. "God has blessed me with the athletic ability that I have.”

Cooley carried 13 times for 112 yards as Louisville rushed for a season-high 331 yards, the most since 2019 against Syracuse.

Grosel completed 17 of 32 passes for 141 yards and a TD, but threw two interceptions in his first start as Boston College (4-3, 0-3) dropped its third consecutive game. Alec Sinkfield's 11-yard TD run midway through the first briefly put BC up 7-0 before Cunningham took his time to look for receivers before sprinting left for a 10-yard, game-tying score.

“It wasn’t just off of the takeaways," he said. “We were just inefficient at that, for most of the night, driving the ball. When you take the ball away, like the defense did, you’ve got to put it in the endzone, and we failed to do that.”

After being criticized for sending just three pass rushers against pass-happy teams such as Wake Forest and Virginia, Louisville's defense brought the house against BC early and often with up to six defenders at times. It yielded a vicious blind-side sack of Grosel by Yassir Abdullah on the opening possession alone and included two more with a couple of QB hurries.

“When you get down, it’s hard for you to stay on schedule,” Grosel said. “We expected them to be aggressive, but we handled it pretty well for the most part. You know, sometimes they get you.”

Announced attendance for Louisville’s homecoming game was a season-low 38,202 and looked even sparser in the 62,000-seat stadium before showers arrived to send some spectators seeking cover. At the same time, those who remained created a loud atmosphere.

Boston College appeared poised to break from recent scoring woes by scoring the game's first touchdown. The Eagles broke double digits but their TDs were bookended around offensive struggles that could only turn one of four turnovers into points. They committed their share of mistakes as well, while allowing three sacks and seven tackles for loss.

Louisville looked like it would continue its fourth-quarter defensive issues as BC got within a touchdown in the fourth. The Eagles never got closer, and the defense excelled keeping them out of the end zone despite mistakes by Cunningham and the offense. Then again, the QB, Cooley and Mitchell did what was necessary in the first half by running at a team that allowed less than 126 yards per game coming in.