Dan Mullen finding a knack for trick plays at No. 14 Florida 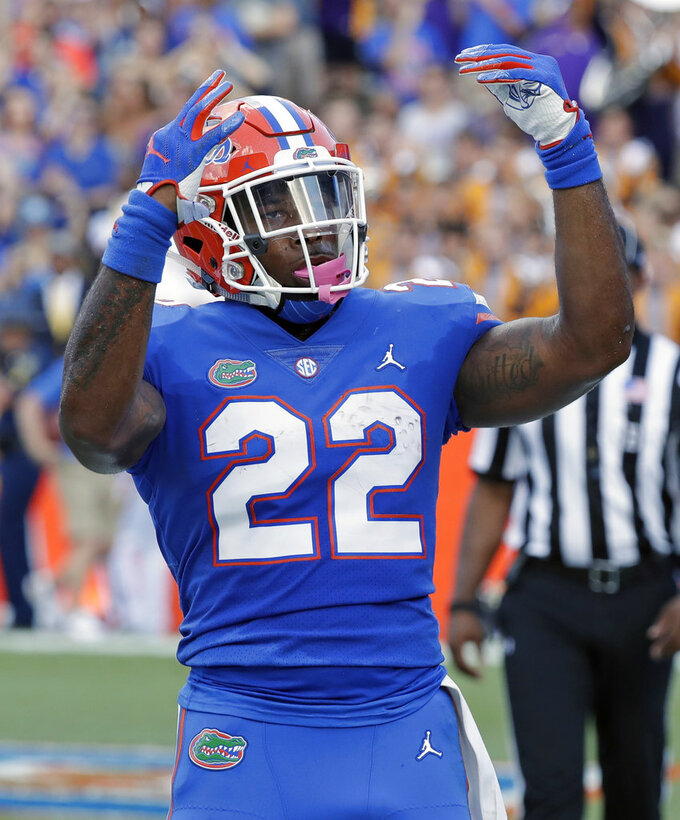 Florida running back Lamical Perine waves his arms to fans after scoring a touchdown against LSU during the first half of an NCAA college football game, Saturday, Oct. 6, 2018, in Gainesville, Fla. (AP Photo/John Raoux)

The first-year Florida coach has turned to a little trickery to help the 14th-ranked Gators mask their offensive deficiencies.

"Daring Dan" is perfect on the season with them, too.

His latest play-calling masterpiece came Saturday against LSU. Mullen dialed up a throwback pass from seldom-used tight end Lucas Krull , a former left-hander pitcher at Arkansas, to quarterback Feleipe Franks that set up the go-ahead touchdown in a 27-19 victory.

The timing was impeccable. The execution was flawless. The outcome was something Florida players and coaches are starting to expect.

A week earlier, the Gators used a double pass nicknamed "Kodak" to beat Mississippi State 13-6 . The play was named after rapper and Florida fan Kodak Black.

So what about Krull's 15-yard completion to Franks?

"That's just called throwback," Mullen said. "We have some cool, other plays in there. ... It was one that we had a long time ago. I wasn't smart enough to create cool names for plays until about four or five years ago. That's just one we've had for a long, long time. But, sorry. I've got to be more creative than just throwback."

No one will mind plain as long as it's productive.

And the Gators (5-1, 3-1 Southeastern Conference) have been productive while winning three straight. It hasn't been particularly pretty on offense, mostly because the team's line is a work in progress and Franks is far from a polished passer.

Mullen, to his credit, has found ways to get the most out of both.

He's not asking the line to try to manhandle more physical fronts in a league filled with them, and he has Franks making quick reads and, if nobody is open, scrambling for yards.

Add in some deception, and Mullen and the Gators are doing enough to complement a stout defense that continues to be the backbone of the team .

"He's got every trick in the bag and he knows when to call the right play at the right time," Krull said. "He's tremendous at what he does."

On a first-and-10 play at the LSU 17 and trailing 19-14, the 6-foot-6 Krull started in motion from right to left, took a handoff that resembled an end-around and then pulled up and floated a pass back to Franks, who had slipped into the flat mostly unnoticed.

Franks was tackled at the 2, setting up Lamical Perine's touchdown run on the next play.

"I was hoping someone would run with me and I'd kind of snatch it off someone's head or something like that (and) make 'SportsCenter' top plays," Franks said.

It certainly will end up on Franks' growing highlight reel.

He threw a jump pass for a touchdown in the season opener , stirring memories of Florida great Tim Tebow. Franks started the double pass last week, the one that ended with Kadarius Toney's 20-yard TD toss to Moral Stephens.

Franks' 13th touchdown pass of the season came Saturday on a rocker step to Stephens, another play Tebow made famous at Florida. Franks took the shotgun snap, stepped toward the line of scrimmage like he was about to tuck it and run, and then rocked back and completed a 3-yarder to Stephens.

"It wasn't really an ode to Tebow," Mullen said. "It was an ode to score touchdowns. When you get down in there, you got to defend the quarterback because we're willing to run the quarterback, and Feleipe is a willing runner. So all of the sudden that adds an extra person. Eyes get caught to him, people lost man coverage and we get somebody wide open in the end zone."

Mullen insists there are plenty more wrinkles in his playbook. Others could show up Saturday at Vanderbilt (3-3, 0-2), which has dropped 26 of the last 27 in the series.

"We have a bunch of them and you practice them," Mullen said. "It's more about your comfort level at executing it because it's a big risk-reward play.

"You pick trick plays for certain defenses, certain looks, how they fit. We've got a bunch more in the back pocket for when the time calls. If you call it at the right time and it works, you look like a genius, right? Or you call it and it doesn't work and: 'That guy's an idiot. How did they think that would work?' It's a lot about timing."