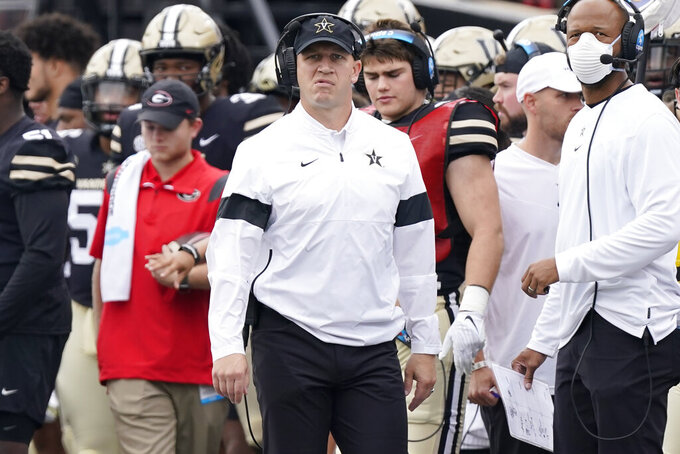 Vanderbilt head coach Clark Lea, center, watches from the sideline in the first half of an NCAA college football game against Georgia Saturday, Sept. 25, 2021, in Nashville, Tenn. (AP Photo/Mark Humphrey)

NASHVILLE, Tenn. (AP) — Georgia coach Kirby Smart spent the week talking about Mike Tyson, pushing his Bulldogs to start fast and play up to the standard he wants this season.

His Bulldogs did just that.

JT Daniels threw for 121 yards and two touchdowns playing only the first quarter as No. 2 Georgia dominated Vanderbilt 62-0 Saturday in the Bulldogs' biggest win in a series that started in 1893.

This game was effectively over when Georgia (4-0, 2-0 Southeastern Conference) led 35-0 after the first quarter. The Bulldogs started three of four drives in Vandy territory. They recovered a fumble on a kickoff to set up one TD, then Christopher Smith intercepted a pass to set up a second TD less than 30 seconds later.

“You got to be elite all the time," Smart said. “You can’t be some of the time. It’s not how elite teams play, and our guys embrace that and I was proud of them.”

Bulldogs' fans turned this into their home away from Sanford Stadium in what Smart called an “incredible” turnout with Georgia red even in seats behind the Vanderbilt bench. They got to watch the Bulldogs post their first shutout this season, forcing Vandy three-and-out nine times.

“We say nobody in our end zone,” Georgia linebacker Nolan Smith said. "That’s the standard, that follows for everybody.”

Vanderbilt (1-3, 0-1) lost its fourth straight to Georgia and its 14th straight SEC game, a skid that could be longer if COVID issues hadn't forced Vandy to cancel its visit on Georgia's Senior Day last season. A program that won in Athens in 2016 showed how much rebuilding first-year coach Clark Lea faces.

“We came out flat, we turned the ball over, we made mistakes especially in the special teams area,” Lea said. “And look. It doesn’t matter who you play against. You're setting yourself up for disappointment. For me, this isn't about them. It’s about us. It's about how we perform.”

Tight end Brock Bowers started the scoring with a 12-yard run on an end around with 11:21 left, and he became the first Bulldogs’ player to run for a TD and catch a TD pass in the same game since Todd Gurley did it against Florida in 2013. Bowers later caught a 29-yard pass from Bennett in the third quarter.

Ladd McConkey also caught a TD pass and scored on a 24-yard run of his own.

Smart pulled Daniels, who is now 7-0 as a starter, after the first quarter. Stetson Bennett threw for 151 yards and a TD himself.

“It was a situation we felt like we could get Stetson some reps, and things kept rolling,” Smart said of the early substitution at quarterback.

Vanderbilt: The Commodores did have some moments. The defense turned Georgia over on downs late in the first half, stopping James Cook for no gain on fourth-and-1 at the Vandy 3. Ethan Barr got the interception off a breakup by Jaylen Mahoney.

Georgia did nothing to hurt its spot in the Top 25, though the Bulldogs' scout team might have offered a better scrimmage.

Smart says an NFL GM told him the best thing he could tell his Bulldogs was to play well enough for their teammates to play.

“I didn’t have the guts to say it, but they did,” Smart said. "They went and played well and the other guys got to play because they played well. So our team got to grow as a unit because of our ability to play a lot of players.”

Georgia hosts Arkansas in another early kickoff next Saturday.

Vanderbilt hosts UConn next Saturday in its last non-conference game of the season.