Darrell Mudra, successful coach at all levels, dies at 93 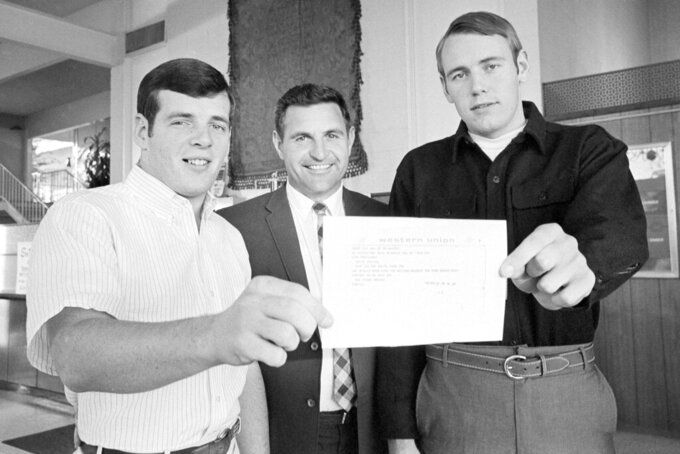 University of Arizona football coach Darrell Mudra is flanked by his two quarterbacks, Mark Driscoll, left and Bruce Lee as they hold a copy of telegram from Apollo 8 commander Col. Frank Borman, an Arizona native, on Dec. 28, 1968, in El Paso, Texas. The telegram was sent to the team in El Paso by Borman's wife, Sue Borman, an alumni of Arizona, wishing them well in their Sun Bowl game with Auburn University. Mudra, a College Football Hall of Fame coach, who won better than 70% of his games and two national championships in a career spanning the 1950s through 1980s, died Wednesday, Sept. 22, 2022, The National Football Foundation said. He was 93. (AP Photo/Ferd Kaufman)

TALLAHASSEE, Fla. (AP) — College Football Hall of Fame coach Darrell Mudra, who won better than 70% of his games and two national championships in a career spanning the 1950s through the 1980s, has died.

The National Football Foundation announced Mudra died Wednesday. He was 93.

Mudra's nickname was “Dr. Victory” because of his success at every level, coaching all his college games from the press box instead of on the sidelines. He won the College Division national title at North Dakota State in 1965 and the Division II championship at Eastern Illinois in 1978. He retired from coaching in 1988 with a career record of 200-81-4 and was inducted into the College Football Hall of Fame in 2000.

Mudra spent his youth in Nebraska, growing up in Omaha and playing fullback at Peru State before working as a high school assistant in the state. His first college head coaching job was in Colorado at Adams State, where he was 32–4–1 with three conference titles and a Mineral Bowl victory, the foundation said.

He moved to North Dakota State in 1963 and took over a team that was 0-10 the year before. He won his first national title two years later and went 24-6 in three seasons with the Bison.

Mudra spent two seasons at Arizona, winning eight of his first nine games in 1968 and finishing 8-3 with a loss to Auburn in the Sun Bowl. His low point came at Florida State, where he was 4-18 in two seasons before Bobby Bowden took over in 1976.

His other college stops were Western Illinois, Eastern Illinois and Northern Iowa. He also coached the Montreal Alouettes of the Canadian Football League in 1966.

This version corrects one of the schools where Mudra won a national championship to North Dakota State.