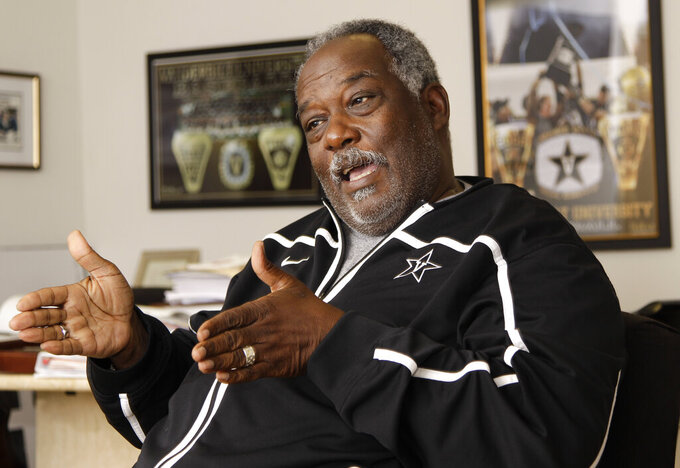 NASHVILLE, Tenn. (AP) — David Williams II, the first black athletic director in the Southeastern Conference and an "incomparable leader" at Vanderbilt, died Friday, hours before his retirement party. He was 71.

He died at Vanderbilt University Medical Center, the university said. The cause was not disclosed. His last day as athletic director was Jan. 31.

"David Williams stood tall on this campus, in this city and in college athletics nationally as an incomparable leader, role model and dear friend to me and so many others," chancellor Nicholas Zeppos said in a statement. "We are devastated by this loss. His impact on our community is immeasurable and will be felt for generations to come."

Williams was nicknamed the Goldfather — the school colors are black and gold — for his success at the school. He had been the SEC's second-longest tenured athletic director behind Kentucky's Mitch Barnhart when he announced his retirement last September. Malcolm Turner took over Feb. 1, Williams stayed on as a full-time law professor. He also was establishing a Sports, Law & Society program at Vanderbilt Law School.

"David authored a remarkable legacy at Vanderbilt, one defined by blazing trails and championing the student-athlete," Turner said in a statement.

Williams was vice chancellor of student affairs and a tenured law professor, general counsel and university secretary in 2003 when then-chancellor Gordon Gee dissolved the Vanderbilt athletic department in 2003. Williams' job overseeing student affairs put him in charge of athletics, which he had worked in while at Ohio State.

He shed some jobs in 2012 when he took the athletic director title. During his stay, Vanderbilt won four national championships — baseball (2014), women's tennis (2015) and women's bowling (2007, 2018) — and enjoyed its most football success in nearly a century.

The last bowl berth for the Commodores had been in 1982. Vanderbilt went to six bowl games under Williams, starting in 2008 and most recently in December. It marked a huge turnaround for a program that ended the SEC's longest bowl drought and a 25-year stretch without a winning record.

"I remember the disbelief that people had," Williams said. "But I knew we could do that. And quite honestly, I also knew that the hardest thing of all of this was going to be football because of the size of it and that this is the Southeastern Conference."

Williams hired both James Franklin, now at Penn State, and current coach Derek Mason in football. Vanderbilt has five wins in the past seven years over state rival Tennessee and just reached a second bowl in three seasons. Mason wrote on Twitter that he loved Williams.

"You believed in me...your wisdom and guidance forged a bond that will never be forgotten," Mason wrote.

Williams also hired Bryce Drew and Stephanie White in 2016 to coach men's and women's basketball. Vanderbilt canceled availability with the men's basketball team Friday. Williams also kept Tim Corbin as baseball coach; Vanderbilt's streak of 13 straight NCAA Tournament berths is best in the SEC and the Commodores are the preseason pick to win the SEC title this year.

He also oversaw upgrades to McGugin Center, home to the football program, along with building an indoor football practice facility that also has a track, upgrades to the baseball field, and offices and renovations at Memorial Gym among others.

SEC Commissioner Greg Sankey said in a statement posted to Twitter that he lost both a friend and someone who guided him in many ways.

"His steady leadership and his legacy as a trailblazer have moved the Vanderbilt community in ways that will be felt for generations," Sankey wrote.