DE Kahlid Kareem a rising star for No. 8 Notre Dame 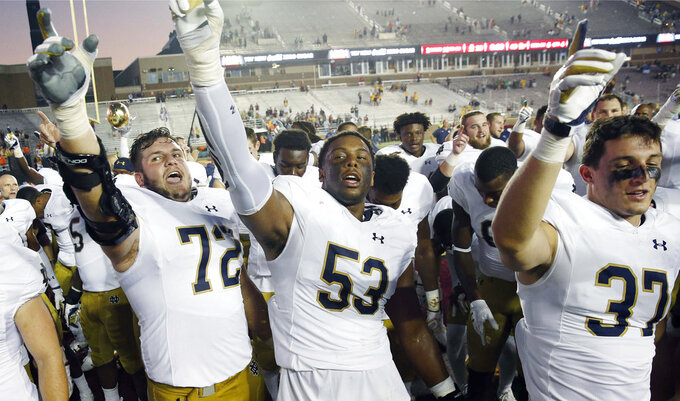 FILE - In this Sept. 16, 2017, file photo, Notre Dame's Robert Hainsey (72) and Khalid Kareem (53) celebrate with teammates after defeating Boston College 49-20 in an NCAA college football game in Boston. Notre Dame junior Khalid Kareem found himself lost in the defensive line shuffle for most of his first two seasons with the Irish. Always buried on the depth chart, the Detroit native just wanted a chance to prove that he could become a regular contributor, and perhaps even a starter. A late-season surge in 2017 followed by a stellar showing in spring ball earned Kareem his chance at both.(AP Photo/Michael Dwyer, File) 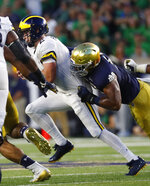 SOUTH BEND, Ind. (AP) — With a first-year starter at defensive end and two other linemen trying out new positions next to him, having coach Brian Kelly consistently call this position group the most stable on the Notre Dame defense seemed like a stretch of logic through the preseason.
If the 24-17 win over Michigan is any indication, Kelly knew what he had.
Paced by junior defensive end Khalid Kareem, the line combined for 15 total tackles, 3.5 tackles for loss, three sacks and two quarterback hurries to keep the Wolverines off balance and their running game almost non-existent in the impressive season-opening win. Through the first three quarters, Michigan managed just 178 total yards and converted only three of nine third down plays into first downs.
"We have to have that kind of defensive depth," Kelly said of an expanded player rotation he threw at Michigan. "We're not generally going to get that one singular star player, but we can develop depth in our group and have that kind of defensive structure where we can roll out a lot of really good football players."
In his first career start, Kareem was particularly good, recording eight total tackles, 1.5 tackles for loss, one sack and one critical quarterback hurry. Kareem's disruptive play kept Michigan quarterback Shea Patterson out of rhythm and often on his back. Patterson completed 20 of his 30 passes for 227 yards but he had no touchdowns and was picked off once.
One of the tone-setting plays of the game came in the first quarter when Kareem dropped Patterson for a 16-yard sack that took the Wolverines out of field goal range and preserved Notre Dame's 14-0 lead.
"As long as I go out there and do my job, I feel like I can be the best in the country," said Kareem, who inherited the starting end position when Jay Hayes decided in April to transfer to Oklahoma.
On Michigan's final possession and Notre Dame holding a seven-point lead, the 6-foot-4, 265-pound Detroit native pressured Patterson into a strip-sack and fumble recovery by senior tackle Jerry Tillery.
"We are ascending as a position group, and as a defense and as a team," said Tillery, who added four tackles and two sacks. "So I'm excited for this season and this team."
Kareem explained after the game that the predicability of Patterson's pre-snap routine helped contribute to the game clinching play.
"I was getting a rhythm with their snap count," Kareem said. "I got a good jump on the ball, beat the tackle, made the play."
After appearing in four games with no statistics as a freshman in 2016, Kareem made the most of his limited game action last season as a back up to Hayes. In 13 games but minimal snaps, Kareem was still able to record 21 tackles, including five for loss with three sacks and one fumble recovery.
"(Kareem) has a knack for pass rushing," Kelly said, "just has a knack of being there and getting to the quarterback. He has some really innate ability to find the quarterback."
Notre Dame's work up front against the Michigan passing game was notable but the success at stopping the run had an even greater impact. Michigan also had only four rushing first downs, it gained 10 yards on a rushing play just once and it went 0-for-3 on fourth-down conversions.
"Our evaluation of our defensive front was relentless effort, play in and play out," said Kelly, whose team hosts Ball State on Saturday.
___
More AP college football: https://apnews.com/tag/Collegefootball and https://twitter.com/AP_Top25