Defense a big reason for UCLA's turnaround this season 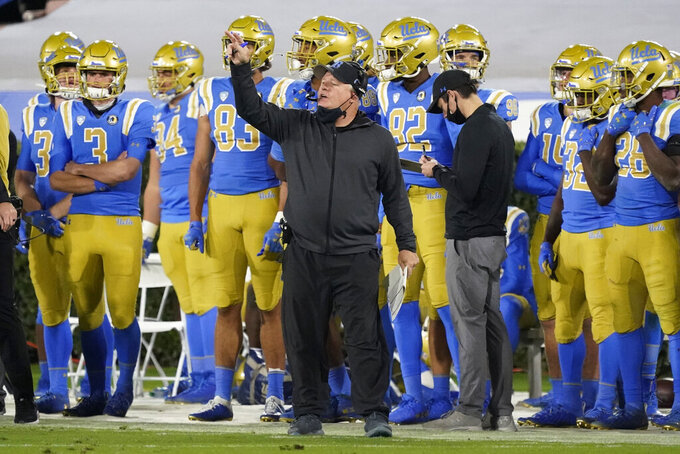 UCLA coach Chip Kelly signals from the sideline during the second half of the team's NCAA college football game against Arizona on Saturday, Nov. 28, 2020, in Pasadena, Calif. (AP Photo/Marcio Jose Sanchez)

LOS ANGELES (AP) — UCLA had one of the worst defenses in the nation during Chip Kelly's first two seasons, a huge reason the Bruins won only seven games during that time.

But UCLA is 2-2 this season because of its defense, which is making a case for being one of the most improved units in the nation. Going into Saturday's game at Arizona State, the Bruins lead the Pac-12 in sacks and tackles for loss while allowing nearly two yards less per play.

“The thing that we talked about in the offseason was getting our best athletes on the field. We thought we had some really good athletes at all three levels. And that’s what we are trying to do,” Kelly said.

Personnel hasn't been the only change, though. Jerry Azzinaro remained as the coordinator but Kelly hired Brian Norwood from Navy to coach defensive backs and Johnny Nansen from USC to coach the defensive line.

Norwood brought the Midshipmen's 4-2-5 defensive scheme, which is predicated on speed and athleticism It also does a good job of disguising pass coverages and pressure with plenty of pre-snap movement.

Or to put it another way — it allows the front seven to pin their ears back and play while the secondary applies tight coverage.

So far it has been a success. The Bruins are averaging three sacks and eight tackles for loss per game while giving up 355.3 yards per game, over 100 yards fewer than the 456.3 they surrendered last season.

The 4.9 yards allowed per play is nearly two yards better than the 6.7 last year. They have held two of the last three opponents under 100 yard rushing and only one team has gone over 300 yards passing.

“I think the best thing we do on defense this year is focusing on our game. When it’s our turn to get on the field, we have to make plays and we have to be the ones who are impacting the game,” linebacker Bo Calvert said. “A lot of the coaches around here talk about impacting the game, and you have the opportunity.”

The defense has also benefitted from a couple of graduate transfers. Qwuantrezz Knight had experience playing striker — a hybrid safety/linebacker position — from his days at Kent State and cornerback Obi Eboh, who transferred from Stanford, is used to the rigors of Pac-12 play.

“Everyone is racing for the ball and trying to make a play in the backfield to take over the game," Knight said. "We try not to put too much on our plate, just put simple things down so we can execute to the best of our abilities.”

Eboh said Norwood has stressed improving ball skills to the secondary. It worked during Saturday's 27-10 victory over Arizona as the Bruins had a pair of fourth-quarter interceptions.

“We’re doing those things fundamentally so that when we get into the game it kind of becomes second nature and I think we’ve done a good job of that," Eboh said.

If the defense can continue to play at a high level, the Bruins could make a bowl appearance for the first time in three years. UCLA faces an Arizona State squad that has had its last three games canceled as the program was hit with a COVID-19 outbreak. The Bruins then host crosstown rival Southern California on Dec. 12 and an opponent to be determined the following week.

“I really believe our players know that they’re a good football team and if we stay away from the self-inflicted mistakes then we got a shot in every game we play no matter where we are this season,” Kelly said. “I think they’ve embraced the process part of it and are getting better on a daily basis.”