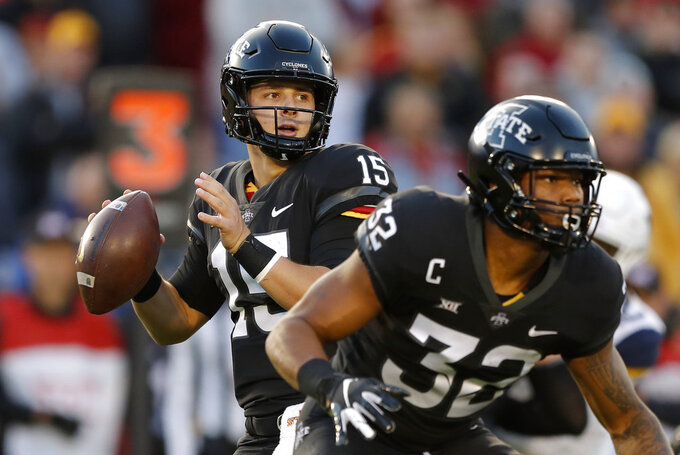 Iowa State quarterback Brock Purdy (15) looks to pass as he gets a block from teammate David Montgomery (32) during the first half of an NCAA college football game against West Virginia, Saturday, Oct. 13, 2018, in Ames, Iowa. (AP Photo/Charlie Neibergall) 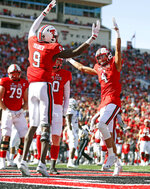 AMES, Iowa (AP) — The matchup between freshman quarterbacks Alex Bowman and Brock Purdy could wind up being appointment viewing.

But the key to Saturday's Texas Tech-Iowa State game in Ames might lie with a pair of better-than-expected defenses.

Bowman has thrown for 2,088 yards and 14 touchdowns with just four picks for the Red Raiders, and he's third in the country with 348 passing yards a game. Purdy has been just as sensational in his last two games, accounting for nearly 700 yards of total offense and eight TDs in leading the Cyclones (3-3, 2-2) to wins over Oklahoma State and West Virginia.

"He's a very dynamic player, can run, can throw, very poised (and) has really given them a spark," Tech coach Kliff Kingsbury said of Purdy. "He's a big time talent, big time player."

Texas Tech allowed just 31 combined points in back-to-back road wins over the Cowboys and TCU, and it's allowing a respectable 26.4 points a game after years of getting gashed on defense.

"They're physical," Iowa State coach Matt Campbell said. "Their linebackers can really run, their defensive line, a lot of those guys have played. They understand where they need to be."

Iowa State is allowing just 22.7 points a contest, good for second in the conference, and all six of its opponents have scored less than their average.

It is the first game for Texas Tech in Ames since the Red Raiders and current NFL star Patrick Mahomes were blown out 66-10 by Iowa State.

If Texas Tech can get past the Cyclones, it has a chance to take control of one of the two spots in the league title game because it then hosts Texas and Oklahoma in back-to-back weeks. Kingsbury knows not to overlook the Cyclones, especially at home, after what happened in 2016.

"We've had our struggles at Iowa State," Kingsbury said. "Against Iowa State, they've done a tremendous job against us; offensively, defensively, special teams."

Iowa State junior running back David Montgomery struggled — at least by his high standards — during the early portion of the season. A week off to rest an upper arm injury seemed to do the trick, as Montgomery ran for a career-high 189 yards against the Mountaineers.

PEAVY AND PAYNE VS. WESLEY

Iowa State has two of the better cornerbacks in the country in Brian Peavy and D'Andre Payne, but they will be tested by receiver Antoine Wesley. He leads the Big 12 with 50 catches and 858 yards receiving. Wesley is also fourth in the league with six TD grabs, and his 17.2 yards per reception is impressive in an offense reliant on short throws.

A win would put Tech in a bowl for the 16th time since 2000. ... Iowa State broke and then matched the school records for sacks in a game in its last two outings, recording seven apiece against Oklahoma State and West Virginia. The Cyclones average 3.3 sacks a game, third-best in the country. ... Red Raiders opponents are converting just 30.8 percent of their third downs, which ranks second in the Big 12. Tech was last in that category a year ago. ... Iowa State's eight losses since the start of 2017 have all been by 10 points or less.

"From stories I've heard, everybody says it gets real cold up there. Sometimes the grass freezes over, and it's like playing on icicles." — Texas Tech cornerback Adrian Frye said of playing in Ames. The forecast is for rain and a high of 55 degrees on Saturday.