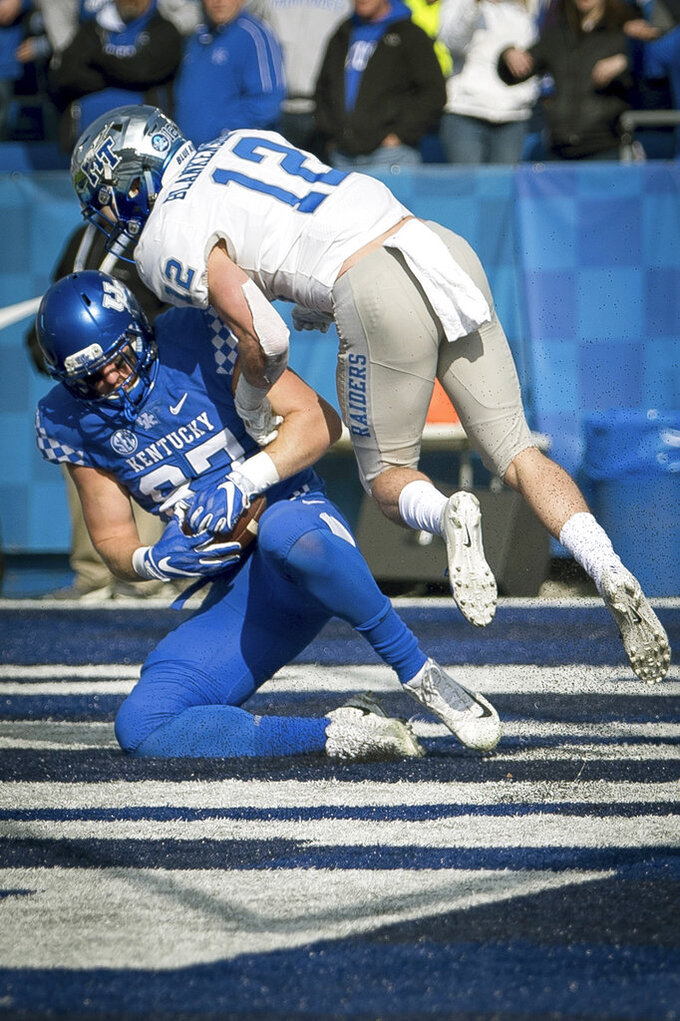 Kentucky tight end C.J. Conrad (87) scores a touchdown as he is tackled by Middle Tennessee safety Reed Blankenship (12) during the first half of an NCAA college football game in Lexington, Ky., Saturday, Nov. 17, 2018. (AP Photo/Bryan Woolston) 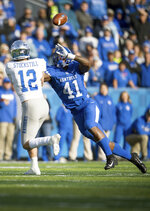 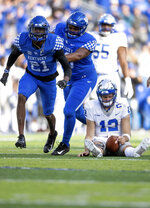 Seniors are expected to stand out in their home finales, and veterans certainly factored in a tenser-than-expected victory against Middle Tennessee.

Edwards' two turnovers led to Kentucky's first two touchdowns, and the Wildcats overcame a second-half lull to make several fourth-quarter defensive stops and escape with a 34-23 win on Saturday.

Kentucky (8-3) ended a two-game slide but had to survive the Blue Raiders' rally within 31-23 early in the fourth. Allen, the Southeastern Conference's sacks leader, dropped Brent Stockstill for a 7-yard loss on fourth down and set up Miles Butler's 32-yard field goal with 4:01 remaining for an 11-point edge.

A defensive facemask penalty helped the Blue Raiders (7-4) reach the Kentucky 5-yard line in the final minute before consecutive sacks of Stockstill by Allen and Jamar Watson totaling 16 yards ended their final chance. Allen had a career-high 15 tackles and two of Kentucky's seven sacks to become the Wildcats' single-season (13) and career sacks leader (27.5).

"I can't thank the linemen enough for doing their jobs and allowing me to have opportunities to make plays like that," Allen said.

Edwards provided the initial defensive boost by returning an interception 66 yards for a TD 1:27 into the game. Then he stripped Zack Dobson of the ball on MTSU's next drive to set up Benny Snell Jr. for the first of his two TDs and a 31-10 cushion that Kentucky eventually needed to earn its eighth victory, its most in the regular season since 1984. The 2007 squad earned its eighth win in the Music City Bowl.

"I'm pleased to get the eighth victory, but (it was) definitely not easy," Kentucky coach Mark Stoops said. "We knew it was going to be a tough, hard-fought game and they kind of beat us at our game. They kept the ball, possessed the ball the entire game and it kind of got a little aggravating."

Fortunately for Kentucky, seniors saved the game on a day when 16 of them were honored. And the contributions weren't limited to defense.

Tight end C.J. Conrad caught an 11-yard, second-quarter scoring pass from Terry Wilson on a play that seemed destined for a big loss of yardage. Wilson spun away from the pressure before rolling left and threading an off-balance pass through several defenders to Conrad in the back of the end zone for a 24-7 lead.

Stockstill completed 30 of 33 passes for 293 yards and three touchdowns and Chaton rushed for 98 yards and two scores. But those turnovers forced MTSU to play catch-up as its four-game winning streak ended.

"We didn't flinch," MTSU coach Rick Stockstill said. "With six or seven minutes left in the game we made it a one-score game, and we couldn't finish it off."

Suiting up would've been rewarding enough for Kentucky sophomore defensive end Josh Paschal, who hadn't played this season while undergoing treatment for a malignant melanoma on the bottom of his foot. Paschal went on to record his first tackle with a third-down stop in the second quarter.

"It felt good just to wipe some dust off, it's been a while," said Paschal, who underwent three surgeries and is undergoing immunotherapy every four weeks.

Kentucky needed this win and should stay in the AP Top 25.

Middle Tennessee: The Blue Raiders outgained Kentucky 392 yards to 324 and seemed poised to tie the game late, but couldn't break through deep in Wildcats territory. Those turnovers on their first two possessions dug a quick hole they couldn't quite escape. Stockstill became the NCAA's 25th player to reach 100 career TDs.

Kentucky: The Wildcats needed a lift, though it was tense. They finally surpassed 20 points for the first time since beating South Carolina 24-10 on Sept. 29. The offense and defense stalled, before Allen came up with stops that sealed the win.

Kentucky visits Louisville on Saturday night in search of a nine-win season and second rivalry win in three seasons.