Defense key in No. 25 Oklahoma St matchup with Iowa State 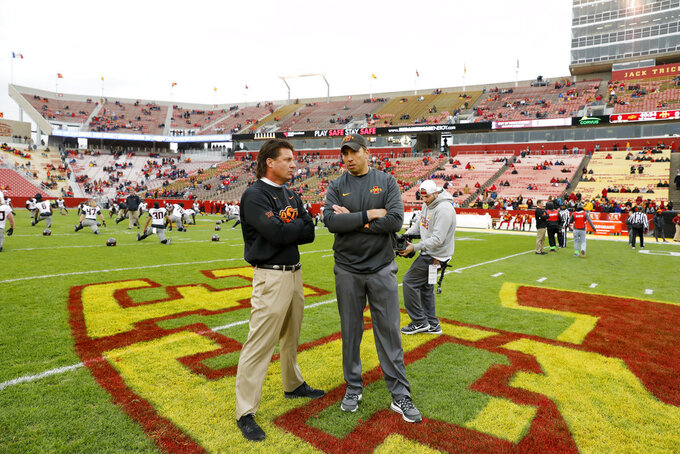 STILLWATER, Okla. (AP) — It could come down to defense on Saturday for No. 25 Oklahoma State when the Cowboys face Iowa State at home.

The Cyclones' offense has struggled this season, ranking last in the Big 12 in both scoring and yards this season. Oklahoma State (4-1, 1-1) will unleash the pressure of its potent pass-rush that leads the nation in sacks.

As for the Cyclones' attack, which generated just 198 yards of total offense last week and averages just 17.5 points per game, worst in the Big 12 and 123rd in the nation (out of 130 FBS schools), coach Matt Campbell believes they are trending in the right direction.

"A lot of growth in areas that we needed to grow," Campbell said of their performance last week. "There's areas that we need to continue to efficiently get better at, but I do think this football team is improving. Another huge challenge this weekend at Oklahoma State."

Five things to watch for on Saturday:

1. BIG BAD WOLF: Sophomore Landon Wolf entered last week's game with four career receptions for 41 yards, but he delivered when needed. Jalen McCleskey left the team with the intention of transferring, and Dillon Stoner was out with an injury. But Wolf stepped up in Oklahoma State's 48-28 win over Kansas and led the Cowboys with six receptions for 116 yards and a touchdown. With Stoner's status for Saturday still uncertain, Wolf's contributions will again be needed. "He did a great job of stepping in and carrying that load," Gundy said.

2. NOLAND AT QB? With Iowa State starting quarterback Kyle Kempt still out with an injury, sophomore Zeb Noland has stepped in. But he struggled at times last week, completing 14 of 28 passes for just 79 yards and a touchdown. He also lost a fumble that TCU's Ben Banogu returned 47 yards for a touchdown early in the third quarter that put the Horned Frogs up 14-7. There's been some speculation that the next backup, freshman Brock Purdy, might see action against Oklahoma State, but Noland did rally to engineer the game-tying drive midway through the fourth quarter. "When our team needed him the most to make a play, he made a play," Campbell said of Noland. "I think for him, it's part of the growing process."

3. SACK ATTACK: Oklahoma State leads the nation in sacks by a wide margin, having compiled 24 so far this season, five more than second-place Ohio State. The Cowboys are led by junior defensive end Jordan Brailford, whose seven sacks is tied for the national lead with Notre Dame's Jerry Tillery. Brailford is also third in the country with 2.1 tackles-for-loss per game.

4. HEALTH QUESTIONS: The biggest question for Iowa State is how much will running back David Montgomery play and how effective will he be? Montgomery has been battling a nagging injury all season. After gaining 101 yards on 21 carries and scoring the game-tying touchdown, he left the TCU game late in the fourth quarter. Campbell still expects to use his offensive weapon. "It's a balancing act," Campbell said. "I think when it's critical situations, you want to put the ball in your best player's hands. David's playing some of his best football right now."

5. RUNNING DOWN HILL: Running back Justice Hill, coming off a game in which he gained 189 yards and a touchdown on 31 carries against Kansas, will again be a focal point of the Cowboys' offense. The conference's leading rusher (ninth in the nation) with 577 yards and six touchdowns, Hill equaled a Big 12 record by scoring a touchdown in 11 consecutive contests.