Defense may be hard to find in Georgia Tech-Georgia shootout 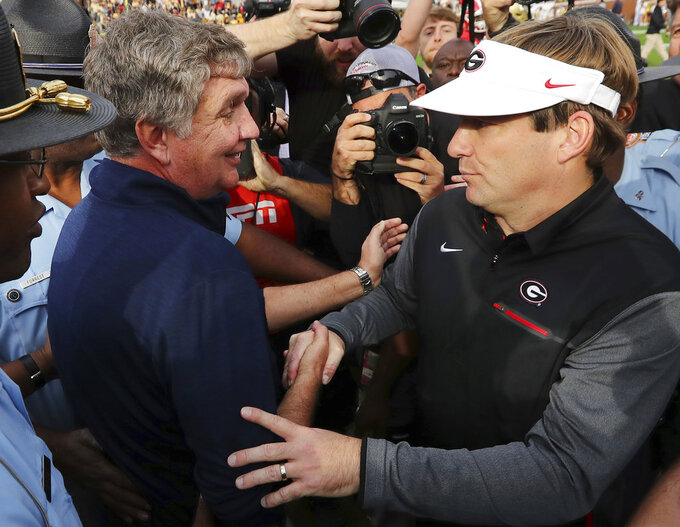 FILE - In this nov. 25, 2017, file photo, Georgia Tech head coach Paul Johnson, left, and Georgia head coach Kirby Smart greet each other after Georgia beat Georgia Tech 38-7 in a NCAA college football game in Atlanta. Neither coach seems to think it’ll be possible to slow down the other team in Saturday’s state rivalry game. (Curtis Compton/Atlanta Journal-Constitution via AP, File)

ATLANTA (AP) — Defense may be in short supply when No. 5 Georgia, coming off its second-most total yards in school history, plays Georgia Tech, which has its triple-option offense on a roll.

Neither coach seems to think it'll be possible to slow down the other team in Saturday's state rivalry game.

"Watching that tape from a week ago, I'm not sure we could do that to our scout team," Johnson said. "They looked unstoppable. Maybe they'll let us play with 12 on defense."

Georgia Tech (7-4) has won four straight and boasts the nation's top rushing offense. As always, the Yellow Jackets' biggest advantage is their spread-option offense is unique among Power Five teams.

Every week, opposing coaches moan about the difficulty of attempting to prepare for Georgia Tech's option attack in only one week. No opponent can find scout team players who can imitate the speed and efficiency with which the Yellow Jackets, led by senior quarterback TaQuon Marshall , run the option.

"You've got to remember they're doctorate experts in it and we're one week a year," Smart said. "So you've got to be smart about what you do and you've got to sell your team on being able to play the right way against it."

Unfair? Georgia has won seven of 10 games in the series since Johnson and his spread-option scheme arrived in Atlanta in 2008. The Bulldogs took a lopsided 38-7 win at Georgia Tech last year.

Georgia's 2017 defense, led by speedy linebacker Roquan Smith, had a wealth of players who had experience against the option.

Marshall knows the Bulldogs are leaning on more newcomers on defense this year.

Georgia still ranks 13th in the nation in total defense.

Georgia Tech ranks only 42nd in total defense but has made good use of its 24 takeaways, more than twice its total of 10 last season.

Johnson says his defense just has to give the Georgia Tech offense a chance. Last year the Yellow Jackets' offense spent too much time on the sideline.

"The thing that sticks out about last year's game to me is we ran 53 plays," Johnson said. "That's been the thing for us the last two weeks, we can't get off the field (on defense). That's what we usually do to other people."