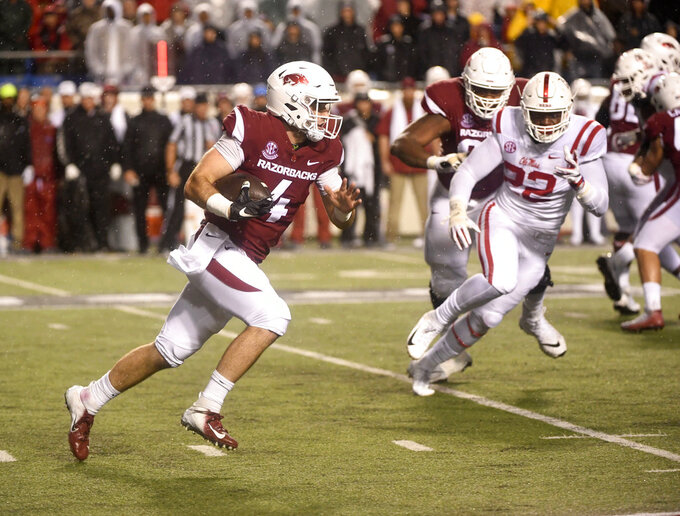 FAYETTEVILLE, Ark. (AP) — Even in a year full of one disheartening setback after another, Arkansas' second-half collapse in a loss to Mississippi last week had a particular sting to it.

The Razorbacks (1-6) appeared well on their way to earning their first Southeastern Conference victory under first-year coach Chad Morris, right up until the Rebels rallied from 17 points down for the win.

Arkansas will have its best chance at ending a six-game losing streak — and perhaps its last win of the season — when it steps out of SEC play for the final time this season against Tulsa (1-5) on Saturday.

It's a chance for Morris to show what things might look like for the Razorbacks once he restocks a talent-depleted roster, and it's an opportunity for players to earn a much-needed bit of praise in an otherwise difficult season.

"We're hanging in there fine," freshman defensive back Jarques McClellion said. "It's just a storm we're in right now, so we've just got to know it's going to blow by and we've always got to believe in each other, no matter what happens."

Arkansas lost three of its most productive offensive players to injuries during the loss to Ole Miss, with quarterback Ty Storey and running backs Rakeem Boyd and Devwah Whaley exiting before and during the second-half collapse. Storey and Boyd returned to practice this week and are expected to play against the Golden Hurricane, but Whaley had ankle surgery and is out for the immediate future.

They will face a Tulsa team that's much-improved defensively from last year's 10-loss team, but one that's lost several close contests during its five-game losing streak — including a 25-24 setback against USF last week.

"Guys are being very resilient; we've stayed tight together," Golden Hurricane coach Philip Montgomery said. "Knowing that we're close, we've just got to take that next step and get over the hump."

Arkansas cornerback Ryan Pulley was ejected in the final minute of last week's loss to Ole Miss, and Morris said "there will be some game time missed" against Tulsa as a result. The junior has two interceptions this season for the Razorbacks.

Morris made his transition from being a high school coach in Texas to the collegiate level when he was the offensive coordinator at Tulsa in 2010. The Arkansas coach was there for one season before moving to the same position at Clemson. He said Tulsa is "a very special place," and that the hard-luck Golden Hurricane is having a similar season to the Razorbacks.

"They're better than their record," Morris said. "We know we'll have our work cut out for us."

Tulsa has two of the top young running backs in the American Athletic Conference in sophomores Shamari Brooks and Corey Taylor II. The duo has combined to rush for nearly 900 yards this season despite each missing one game with injuries, and Brooks had 100 yards on the ground in last week's loss.

"I think they're both guys that understand what we're doing offensively," Montgomery said. "They run with the type of passion that you want them to possess."

Arkansas sophomore Rakeem Boyd leads the Razorbacks with 403 yards rushing this season and has reached 100 yards on the ground in each of his last two games. Boyd had 109 yards rushing last week on just seven carries, highlighted by a 69-yard touchdown run, before exiting the game with a back injury in the second quarter.

Tulsa was 2-10 last season after winning 10 games a year before in 2016, thanks in large part to the struggles of a defensive unit that allowed an average of 44 points per game through the first six games of last year. This season, the Golden Hurricane has improved on that side of the ball — allowing 30.2 points per game — but it hasn't been enough to help turn things around in Montgomery's fourth season.