Desperate times: Miami, Georgia Tech have no room for error 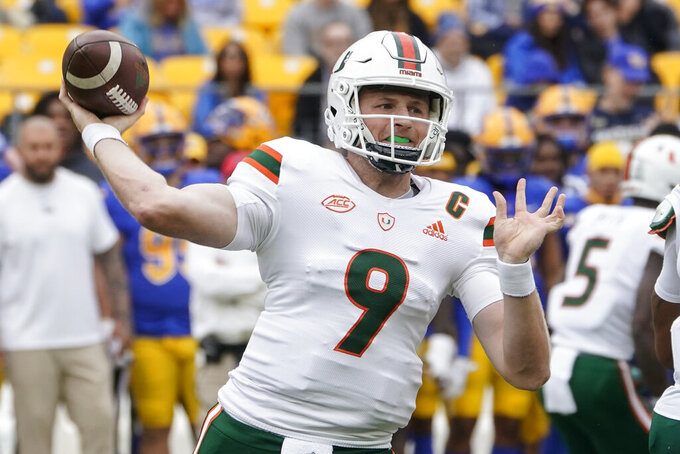 MIAMI GARDENS, Fla. (AP) — For Miami and Georgia Tech, the room for error is gone.

If the Hurricanes want to continue having any sort of viable shot at winning the Atlantic Coast Conference’s messier-by-the-week Coastal Division, they must beat Georgia Tech. And if the Yellow Jackets want to have any realistic chance of making a bowl game, they must beat Miami.

As such, both sides know what’s coming from the other side when they face off Saturday — desperation.

“When we play in the ACC Coastal, we expect the games to be tight, close, highly contested,” Miami coach Manny Diaz said. “Georgia Tech’s backs, they’re against the wall. We recognize that. We expect to see a wounded team fighting for their life on Saturday.”

He’d prefer to see his team have the same approach. It’s been that way of late, and it’s been working.

Miami (4-4, 2-2) has given itself hope again after beating N.C. State and Pitt — both AP Top 25 teams at the time, both in the opening Top 25 rankings released earlier this week by the College Football Playoff committee — over the past two weekends. None of the four teams left on the Hurricanes’ schedule currently has a winning record, so there’s a chance for Miami to keep moving up in the Coastal race.

“To me, it's, ‘Hey, let's find a way to win a football game and keep that backs-against-the-wall mentality,'" Diaz said.

Georgia Tech (3-5, 2-4) is ahead of only Duke in the Coastal standings. But a loss on Saturday would put postseason hopes in absolute peril since the Yellow Jackets would need to win out just to become bowl-eligible at 6-6 overall — and, in that scenario, they’d have to beat No. 1 Georgia to make that happen.

The Yellow Jackets insist they're seeing steps in the right direction.

“The thing that we’ve done in this program, the guys have done, the coaches have done, is (close) the margin for error,” Georgia Tech coach Geoff Collins said. “We’ve decreased the gap amongst the teams that we’ve played. The last phase in the development of the program (is) not only to be in these close games ... we’ve got to find ways to win them.”

The Hurricanes and Yellow Jackets didn’t play last season. They were scheduled to play in November, only to have the game postponed because of virus-related issues at Miami. The rescheduled date was pushed to Dec. 19, and the Yellow Jackets wound up telling the ACC that it couldn’t play. The Miami-Georgia Tech cancellation was announced the day before the Hurricanes lost what became their regular-season finale to North Carolina.

Miami has had each of its last four games — two wins, two losses — decided by four points or less, the first time in program history that there’s been such a run of games being so close. Counting a two-point win over Appalachian State earlier this season, the Hurricanes have played five games decided by four or fewer points. That’s the most for any FBS team in the country entering this week.

Georgia Tech has a pair of standouts leading the offense, and technically, both are still classified as freshmen because nobody lost any eligibility last year by NCAA rule. Quarterback Jeff Sims crossed the 3,000-yard passing mark last week, making him only the 12th player in school history with that many. Running back Jahmyr Gibbs, also last week, went over the 2,000-yard mark in career all-purpose yards.

Georgia Tech leads the all-time series between the schools, 13-12. But Miami has won eight of the last 11, even with the Yellow Jackets prevailing in 2018 and 2019.