Despite loss, big prizes still in sight for No. 11 Minnesota 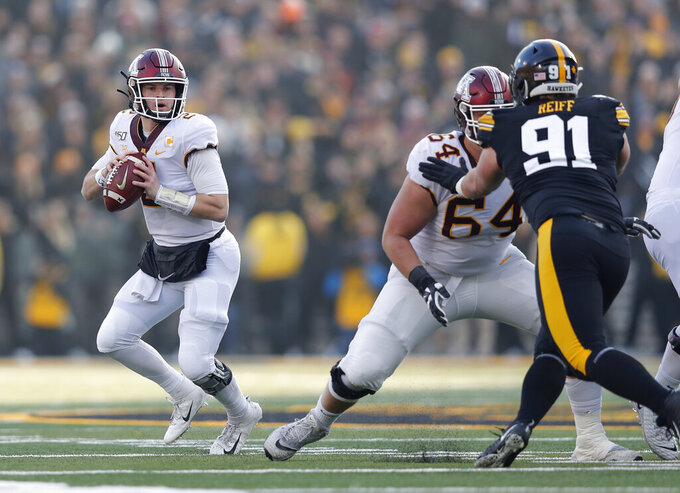 Minnesota quarterback Tanner Morgan, left, drops back to pass during the first half of an NCAA college football game against Iowa, Saturday, Nov. 16, 2019, in Iowa City, Iowa. (AP Photo/Matthew Putney)

EVANSTON, Ill. (AP) — No. 11 Minnesota had its perfect season ruined and playoff hopes dented last week. Despite all that, big prizes remain out there.

The Golden Gophers will try to bounce back and remain in line for a spot in the Big Ten championship game when they visit struggling Northwestern on Saturday.

Minnesota (9-1, 6-1, No. 10 CFP) was riding high a week ago, coming off a victory over then-No. 5 Penn State. But the Gophers’ hopes at making the College Football Playoffs took a huge hit in a stadium where they haven’t won in 20 years when they lost 23-19 at Iowa.

“That’s what coach (P.J.) Fleck always says, ‘The sun’s going to rise. You have another opportunity to get better,’” defensive end Winston DeLattiboudere said. “So (we) were hugging and loving up on guys, because it was tough. It wasn’t easy to deal with in that moment. But we knew if didn’t move on from it, then we couldn’t help elevate the team to where it needed to be.”

Minnesota remains in command of the Big Ten West, with a one-game lead over No. 14 Wisconsin. The Gophers host the Badgers next week.

But before they can focus on that game, they will try once again to win in a stadium where they have experienced difficulties.

Northwestern bottomed out this season, the first team to go from playing in the Big Ten championship game since its inception to 2011 to finishing last in its division the following season. The Wildcats are in danger of going winless in conference play for the first time since the 1998 team finished 0-8 in the Big Ten and 3-9 in Gary Barnett’s final season.

On the plus side, they snapped a seven-game losing streak with a 45-6 romp over UMass. But even if they win the final two games against Minnesota and Illinois, they would still match the 2006 team for the worst record in coach Pat Fitzgerald’s 14 seasons.

“I firmly believe it will get turned around pretty darn quickly,” Fitzgerald said.

The improvement of the offensive line over the course of the season has been a significant reason why the Gophers have had so much success moving the ball, ranking third in the Big Ten in points and yards. After a strong showing against a stout Penn State front, however, the group had a tough time against another daunting defensive line at Iowa. Tanner Morgan was sacked a season-high six times after going the previous five games with a total of only two sacks. The Gophers were missing starting right guard Curtis Dunlap Jr. to an unspecified injury.

“It was a huge learning opportunity,” Fleck said. “They’re one of the best defensive lines in college football, one of the best defenses in college football. I think it was great for the offensive line to get that experience. They went from Penn State to Iowa, which are very similar. We’ve got to grow up. We’ve just got to keep growing up. There’s no seniors on that offensive line. The better competition they play against, the better they’re going to be.”

Northwestern ranks last among 130 teams in passing efficiency, 129th in scoring offense, 126th in passing offense and 124th in total offense. Quarterback play has been a big issue, with senior TJ Green suffering a season-ending foot injury in the opener against Stanford and Clemson transfer Hunter Johnson and junior Aidan Smith struggling.

“That is the No. 1 room that I will get fixed,” Fitzgerald said. “Period. End of discussion. It’s not hard, it’s not complicated. It’s painfully obvious. But those guys are all great kids. They just were not prepared for what it takes to be the starting quarterback, and it shows.”

With fellow freshman Michael Lantz dealing with an unspecified leg injury, Brock Walker has taken over as Minnesota’s kicker. After making all of his kicks in the 31-26 win over Penn State, Walker made two short field goals against Iowa but missed a 50-yarder and an extra point in the 23-19 loss.

So the job is up for grabs, according to Fleck, with senior Michael Tarbutt, a graduate transfer from Connecticut, also in the mix.

“Do you have a three-sided coin?” Fleck said, smiling.