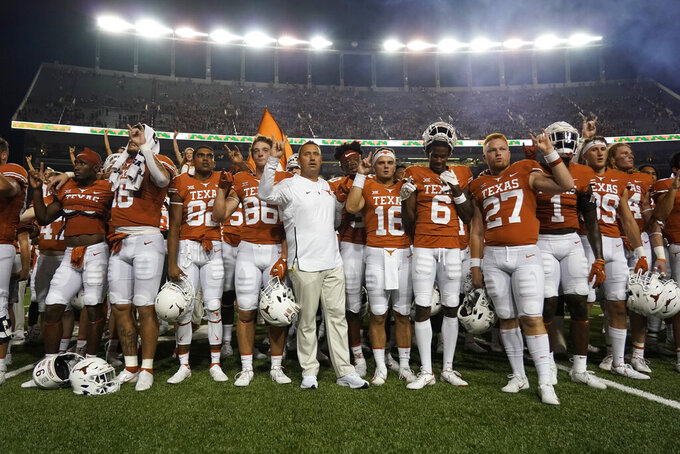 Texas head coach Steve Sarkisian, center, leads his team as they sing "The Eyes Of Texas" after an NCAA college football game against Rice on Saturday, Sept. 18, 2021, in Austin, Texas. (AP Photo/Chuck Burton)

FORT WORTH, Texas (AP) — Texas got run over by a future Southeastern Conference foe in its only other road game this season, and in recent years the Longhorns have been a winning remedy for TCU when the Horned Frogs are coming off a loss.

Something just feels different this time for the Longhorns going into their Big 12 road opener Saturday. It will be their first visit to a conference opponent since they and sixth-ranked Oklahoma accepted invitations to join the SEC no later than the 2025 season.

The Longhorns (3-1, 1-0 Big 12) have been scoring at a blistering pace since Casey Thompson became the starting quarterback and Bijan Robinson is running free. They have scored 128 points in Thompson's two starts, with 600 total yards in both. Texas hasn't punted in consecutive games for the first time in its history.

First-year Texas coach Steve Sarkisian said Thompson owns the game plan because he studies and knows what they are trying to do. The coach said he knows how to get everyone lined up and even reminds running backs where to go for check-down passes.

“That comes because he prepares really well,” Sarkisian said. "I think he is seeing the benefits of that and obviously we are too.”

TCU (2-1) goes into its Big 12 opener still smarting from a home loss to Dallas-Fort Worth rival SMU. The Mustangs and the aftermath of a postgame flag flap were as much a topic of conversation as was Texas when coach Gary Patterson met the media this week.

The Horned Frogs are 7-2 against their former Southwest Conference rival since joining them in the Big 12 in 2012. TCU's last four wins in the series have followed a loss the previous week, including the past two years with Max Duggan at quarterback.

Texas is different since that 40-21 loss at Arkansas, which ran for 333 yards. The Longhorns trailed 33-7 before scoring TDs on Thompson's two drives.

They have 15 TDs on 17 drives in Thompson's two starts, when he is 33-of-41 passing (80%) for 467 yards and seven TDs. The only drives Texas didn’t score came after his two interceptions. He accounted for six TDs (five passing, one rushing) in a 70-35 win over Texas Tech last week.

“He’s just making plays,” Patterson said. “They’re gotten better. You have a new head coach, and when you have a new staff, every week you’re going to get better. It’s kind of like having new players.”

TCU sophomore Zach Evans leads the Big 12 with 110 yards rushing per game, while averaging 7.9 yards on his 42 carries. Robinson is right behind Evans at 109 yards per game. But among the top four running backs for the Longhorns, Robinson has the lowest average per carry at 6.2 yards.

Duggan has hurt Texas the last two seasons as a runner and a passer. When Texas last faced a mobile quarterback at Arkansas, KJ Jefferson rushed for 73 yards. Texas senior defensive back Josh Thompson, who returned an interception for a TD last week, called a Duggan a “good runner. A smart physical player.”

Texas kicker Cameron Dicker also handles punt duties, but much of his work has been on extra points and kickoffs. He hasn't even attempted a field goal since the second quarter at Arkansas. And watch out for Texas blocking punts. Keilon Robinson, a transfer RB from Alabama with blazing speed off the edge, blocked a punt against Rice. He got to another one against Texas Tech but was penalized for his helmet being across the line of scrimmage before the snap.

The Longhorns offensive explosion has masked some issues on defense, notably in the secondary. Texas defenders got burned by Texas Tech for TD passes of 40, 69 and 75 yards when coverage broke down or receivers simply ran by them in one-on-one situations. Texas is 112th in pass efficient defense and No. 80 in overall defense.

Patterson's seven wins over Texas are the second-most among coaches in the Big 12 era (since 1996), trailing only the 11 by former Oklahoma coach Bob Stoops.