Division still in sight, No. 23 Wisconsin hosts Illini next 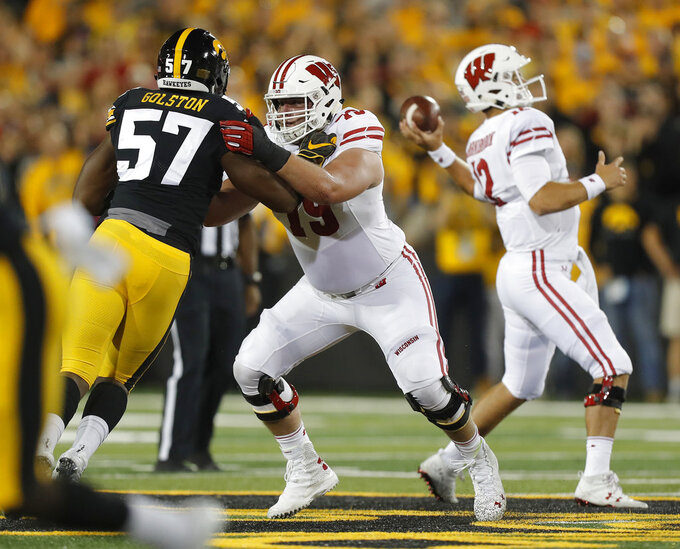 FILE - In this Sept. 22, 2018 file photo Wisconsin offensive lineman David Edwards, center, blocks Iowa defensive end Chauncey Golston, left, from quarterback Alex Hornibrook, right, during the first half of an NCAA college football game in Iowa City. A loss at the Big House left Hornibrook and his teammates reassessing their goals. The playoffs are now out of reach for the 23rd-ranked Badgers after getting blown out at Michigan, though they still control their destiny in the Big Ten West. Win their last six regular season games, starting on Saturday, Oct. 20, 2018 against visiting Illinois, and the Badgers will go back to Indianapolis for the conference title game in December. (AP Photo/Matthew Putney, file)

A loss at the Big House left Wisconsin quarterback Alex Hornibrook and his teammates reassessing their goals.

The playoff is now out of reach for the 23rd-ranked Badgers after getting blown out last week at Michigan, though they still control their destiny in the Big Ten West.

Win their last six regular-season games, starting on Saturday against visiting Illinois, and the Badgers will go back to Indianapolis for the conference title game in December.

"We knew that walking off the field. We knew we lost an in-conference game but we know we still have some goals ahead of us we can accomplish and that's what we'll try to do," Hornibrook said.

To do that, Wisconsin (4-2, 2-1 Big Ten) will likely need more production out of a passing game that was grounded by the Wolverines.

Hornibrook was 7 of 20 for 100 yards with one touchdown pass with 3:47 left. He threw two interceptions, one of which was returned for a score. Hornibrook failed to complete 12 straight passes after connecting on his first three attempts.

The Badgers this week face a defense with 11 interceptions, tied for fifth among major college programs. Cornerback Jartavius Martin and linebacker Del'Shawn Phillips each have three picks for the Illini (3-3, 1-2).

It would help, too, if Hornibrook had more time.

"Where you've got guys in your face, it's hard to play quarterback," guard Michael Deiter said. "You're avoiding getting crushed."

The Badgers aren't facing the same level off defense, though, even if Illinois is good at getting picks. The Illini are last in the Big Ten in pass defense at 305.2 yards per game.

The run defense isn't good either, allowing 199.5 yards a game, second-worst in the 14-team Big Ten. When Hornibrook gets into a bind, he can always hand off to Jonathan Taylor, the nation's second-leading rusher.

"With an offensive line as big, as physical, as athletic as Wisconsin has, that's a tough duty with that commitment to the run," Illinois coach Lovie Smith said.

Illinois is also coming off a blowout loss, falling to Purdue 46-7 last week on homecoming weekend.

The Badgers have had trouble against running quarterbacks, and their secondary is hampered by injuries. The mobile A.J. Bush, who has rushed for three scores over two games since returning from a hamstring injury, may have to wreak havoc in order for the Illini to have a chance at keeping the game close. Bush was 12 of 25 for 170 yards last week, along with 24 yards on 20 carries and a score. The previous week in a win again Rutgers, Bush was 10-of-18 passing for 89 yards and a touchdown, along with 116 yards and two scores on 18 carries.

Wisconsin had three starters in the secondary listed as questionable for the game, including cornerback Faion Hicks (left leg). Both starting safeties, Scott Nelson (right leg) and D'Cota Dixon (right foot) are also hurt. The injuries have challenged a team already relying on mainly freshmen and sophomores in the defensive backfield. The replacements are also inexperienced.

PULSE OF THE TEAM

Wisconsin coach Paul Chryst likes to say that he doesn't want his players' emotions to get too high after big wins and too low after bad losses. He was impressed with how the team handled this week.

"It's no different than when you play a game. How do you focus on the next play. For us, we've got the next opponent, and that's Illinois," Chryst said.

Wisconsin senior linebacker T.J. Edwards gets to show Illinois one last time what it missed out on after not offering him a scholarship. Edwards, who grew up in Illinois and was an Illini fan, has 17 tackles, five tackles for loss and three sacks over the last two games. Edwards took the Illinois matchup more personally earlier in his career.

"It's one of those things to where, we have to win this game to get to our goals," Edwards said. "Definitely a little personal, but not that much anymore."