Division titles at stake when No. 24 Utah hosts No. 4 Oregon 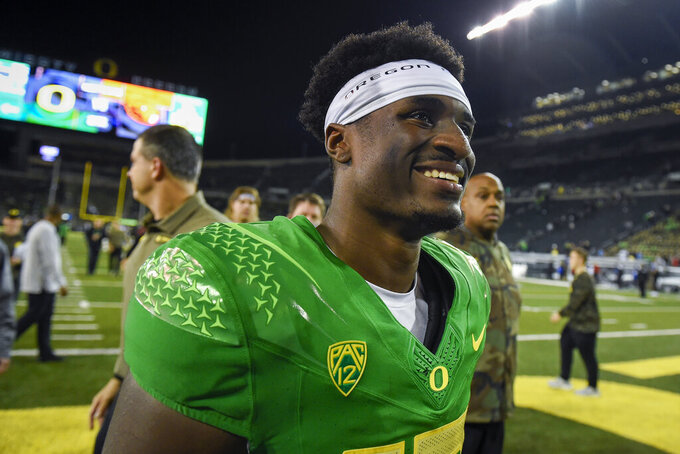 Line: Utah by 3½, according to FanDuel Sportsbook.

No. 24 Utah and fourth-ranked Oregon are both in the driver’s seat to wrap up Pac-12 division titles. The Utes and Ducks are also on course to meet again Dec. 3 in the Pac-12 championship game. The stakes are particularly high for the Ducks. They’re currently third in the most recent College Football Playoffs rankings. Utah coach Kyle Whittingham can become the winningest coach in school history.

Oregon defensive lineman Kayvon Thibodeaux vs. Utah’s offensive front. Thibodeaux was named the league’s defensive player and defensive lineman of the week after a six-tackle, two-sack performance in a win over Washington State. At 6-foot-5, he’s a matchup nightmare for any offensive line. The Utes have an experienced group led by center Nick Ford. They lead the Pac-12 in scoring offense this season (35.7).

Oregon: Tailback Byron Cardwell, who was named the league’s freshman of the week. He rushed for 98 yards and two scores in the win over Washington State. Cardwell is gaining momentum, too, with 280 yards rushing and three scores over his last three games.

Utah: A trio of tailbacks in Tavion Thomas, TJ Pledger and Micah Bernard. They’ve combined for 1,672 yards this season. All three of them rushed for more than 100 yards against Stanford — the first time the Utes accomplished the feat in one game.

Oregon's 31 rushing TDs are tied for second-most in the country. ... Ducks DB Verone McKinley III intercepted his fifth pass of the season against Washington State. He's in a five-way tie for most in the nation. ... Oregon QB Anthony Brown has 170 completions to 15 different receives. Nine different players have caught TD passes from him. ... Utah QB Cameron Rising has thrown for 1,752 yards and 14 TDs. He’s been picked off just twice. He’s also rushed for 321 yards. In addition, he had two punts against UCLA, averaging 39.0 yards per punt. ... LB Devin Lloyd is the lone FBS player with 15-plus tackles for loss, 80-plus tackles and three interceptions.