Do Not Score! How to avoid touchdowns defenses celebrate 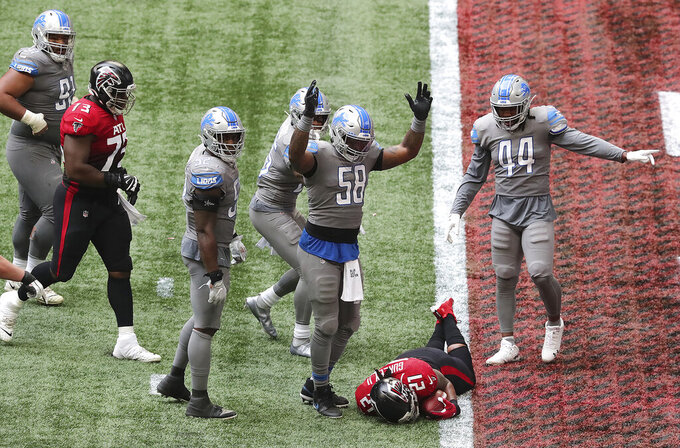 FILE - In this Oct. 25, 2020, file photo, Detroit Lions linebacker Jamie Collins signals touchdown as Atlanta Falcons running back Todd Gurley tries to stop short of the end zone to control the final minutes of the clock in the fourth quarter of an NFL football game in Atlanta. Against a conceding opponent, whose only hope was to take advantage of a ballcarrier's natural inclination to find the end zone, Penn State and the Falcons inadvertently took the bait and ended up losing games they pretty much had wrapped up. (Curtis Compton/Atlanta Journal-Constitution via AP, File)

When the defense is celebrating having allowed a touchdown, something has most definitely gone wrong for the offense.

In two games last weekend, one college and one pro, the team with the ball scored when it was the last thing it wanted to do. Against a conceding opponent, whose only hope was to take advantage of a ball carrier's natural inclination to find the end zone, Penn State and the Atlanta Falcons inadvertently took the bait and ended up losing games they pretty much had wrapped up.

For teams around the country this week, the failures of the Nittany Lions and Falcons could be turned into teachable moments about communication, preparation, and why it can be tricky to ask a player to go against his instincts.

“One of the things coaches do best is learn vicariously,” said former UCLA coach Rick Neuheisel, now an analyst for CBS Sports.

The situations varied a bit for Penn State and the Falcons.

Penn State had a one-point lead and the ball at the Indiana 14 with 1:47 left. On the first play, Indiana backed off and Nittany Lions running back Devyn Ford ran into the end zone, taking a couple of hesitant steps just as he got to the goal line, too late to stop himself. Indiana tied the game on their next possession and won in overtime.

Penn State coach James Franklin said after the game the offense had been made aware it was not supposed to score, but added it was on him if the message did not get across.

The Falcons had the ball at the Lions 10 and were down one with a little over a minute left. They wanted to advance the ball a bit, burn the clock and set up a winning field goal with no time left. Quarterback Matt Ryan told the huddle before the play to not score, but Todd Gurley had too much momentum after breaking through a half-hearted tackle attempt by a Lions defender and barely broke the goal line. The Lions ended up scoring the winning touchdown as time expired.

“Yeah, you talk about those things and you've got to be really locked in in the game in those moments, because those are critical decisions at critical times both as players and coaches,” Clemson's Dabo Swinney said.

It is all about communication. Especially at the college level, where the less experienced players are more likely to get confused because they might never have been in one of these odd scenarios. Plus, in college, coaches don't have as much time with players to go over rare in-game situations.

Former Auburn coach and current SEC Network analyst Gene Chizik said what happened at the end of the Penn State and Atlanta games are examples of what he calls “atypicals.”

He said he would have his staff give players film cut-ups straight from television broadcasts of unusual scenarios that could come up in pivotal moments of a game. It was a way to prepare players for what they would need to do and how it would be communicated during a tense moment.

“You have to have a system in place to make sure that you are giving the players a heads-up that that's the situation we're in,” Chizik said.

Former Georgia and Miami coach Mark Richt said when a team is letting an opponent score to get the ball back, ideally you want to speak directly to your offensive players. Preferably during a timeout instead of signaling in a play.

Most important, of course, is the guy with the ball knows what to do. Richt said in lieu of calling timeout the move would be to send in a running back off the sideline after a clear reminder to be aware of a defense in surrender-mode and to get down before the goal line.

“The most natural thing to do for a running back is to score a touchdown,” said Richt, now with the ACC Network.

Neuheisel said teams should just let the quarterback handle the ball in those situations. The more people involved, the more people that have to be told what to do, the more possibility things can go wrong.

“It's like playing that game telephone or operator,” he said.

Falcons interim coach Raheem Morris laid blame on himself for Gurley's touchdown, and offensive coordinator Dirk Koetter said the-get-as-much-as-you-can approach might not be the way to go.

"Maybe instead of not scoring the thing your practice is getting the ball where your kicker wants it and taking a knee,” Koetter said.

Neuheisel said it's not worth the risk to run a play.

“When you tell them, ‘Get as much as you can without scoring,' now it’s like you’re telling them to get close to the flame, but don't touch it," he said.

One thing is for sure, Chizik said. If a do-not-score situation comes up this week, coaches and players will be better prepared to stay out of the end zone.

“I promise you, across America this week, people worked on that and installed that if previously they had not,” he said.