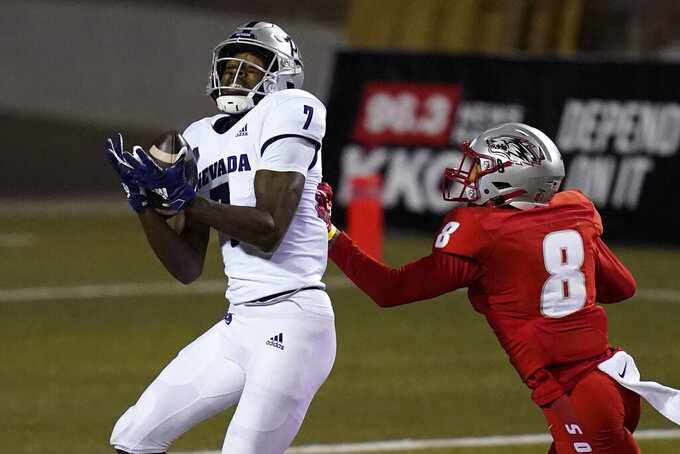 Strong was 24-of-38 passing for 336 yards with one interception and Doubs — who scored on catches of 33, 61, and 59 yards — finished with five receptions for 172 yards. Strong had a string of 299 consecutive passes without an interception snapped. It is the second-longest streak of its kind in Mountain West Conference history. Fresno State's David Carr set the record of 306 in 2013. Doubs has eight touchdown catches, including one in each game, this season. The junior came into the year with six career TDs.

Nevada’s Brandon Talton made his 14th consecutive field-goal attempt, a 34-yarder, to cap the opening drive of the third quarter and, after the Lobos punted on the ensuing possession, Strong hit Doubs for a 61-yard touchdown to give the Wolf Pack their first lead of the game at 20-13 with 4:36 left in the period. Strong’s pass traveled approximately 60 yards in the air.

Running back Bryson Carroll threw his first career touchdown pass to quarterback Trae Hall to give New Mexico (0-3, 0-3) a 7-0 lead late in the first quarter.

Tyson Williams intercepted a screen pass by Hall that bounced off the hands of the intended target and on the next play Doubs caught a 33-yard pass from Strong in the back of the end zone to make it 10-10 with 3:21 left in the first half. George Steinkamp kicked a 48-yard field goal about two minutes later to put New Mexico back in front at the break.

Talton, a sophomore, moved into a tie for eighth in program history with 29 career field goals. Brothers Marty and Tony Zendejas made 72 and 70, respectively in the 1980's.

The Lobos have indefinitely relocated their football program to Las Vegas due to strict guidelines regarding COVID-19 throughout New Mexico.

Attendance at the 35,000-seat stadium was limited to 250 people on Saturday night because of restrictions regarding the pandemic.