Ducks freshman Thibodeaux should get plenty of playing time 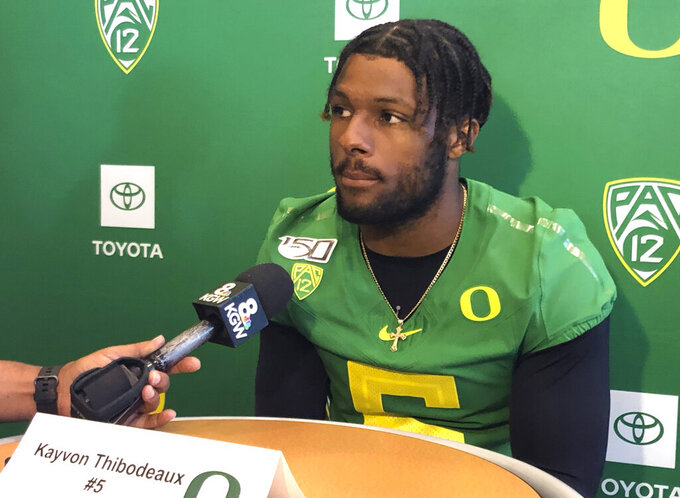 EUGENE, Ore. (AP) — Most college freshmen struggle with things like laundry. Oregon's Kayvon Thibodeaux is not your typical freshman.

The 6-foot-5, 242-pound defensive end enrolled early so he could get a jumpstart on his college career. He said the biggest adjustment came with the realization that no one was going to coddle him.

"There's no one to get on you," Thibodeaux said. "There's a lot more self-discipline here, which for me wasn't that hard because I'm more of a self-disciplined person, but that was a challenge that I faced."

So, a bit more esoteric than laundry and scheduling classes.

"I've always been told I'm ahead of my years as far as my maturity so I guess you could say it's been different for me than most freshmen, but I feel like it's been pretty easy," he said.

No. 11 Oregon landed the five-star recruit from Westlake Village, California, on the first day of the early signing period, beating out Alabama along with a host of other interested schools. Thibodeaux was ESPN's top overall prospect and easily the highest-ranked signee in Oregon's history.

He is among several promising prospects in coach Mario Cristobal's 2019 recruiting class, considered to be in the top 10 nationally. Eleven of those recruits, including Thibodeaux, enrolled in school early.

"I've said this a few times, and I really mean it, the most impressive part about Kayvon is not the five stars that sit beside his name, it's his five-star attitude and work ethic," Cristobal said.

Known for his agility and athleticism, even at his size, Thibodeaux was impressive in spring drills. He's been battling Gus Cumberlander for the starting nod during fall camp.

The Ducks open the season against No. 16 Auburn on Aug. 31 at AT&T Stadium in Texas.

Thibodeaux is brimming with confidence, proclaiming that his aim is to get 10 sacks a season. The Pac-12 leader last year was Utah's Bradlee Anae with eight.

Thibodeaux said his mentality is "no excuses."

Among the other newcomers who stood out in preseason camp was receiver Mycah Pittman, but he injured his shoulder during a scrimmage and is not expected to be back for six to eight weeks. Pittman was pushing for a starting role before he was hurt.

"I could go on and on about guys like Mase Funa, Mycah Pittman, Mykael Wright, Kayvon. It goes on and on and on, (running back) Sean Dollars," Cristobal said. "All these guys, they're really talented guys, and we expect these guys to be contributors, and we expect them to contribute quickly. They've played at high levels. They've had extraordinary coaching at the high school level."

Thibodeaux said the freshman class is ready to show what it can do.

"I can't really speak for anybody else but I know that Coach Cristobal pushes us. And even for the guys that might not play, he's pushing us like we're gonna play," he said. "So regardless of how it turns out on Aug. 31, everybody's working hard and getting ready for football."