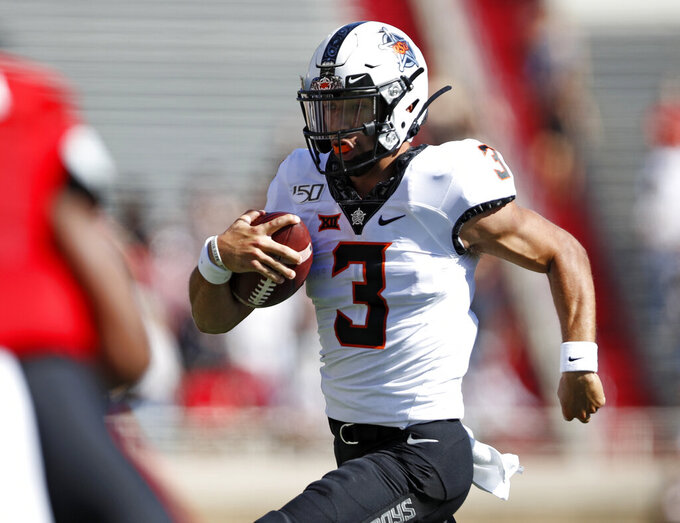 Oklahoma State's Spencer Sanders (3) runs with the ball during the first half of an NCAA college football game against Texas Tech, Saturday, Oct. 5, 2019, in Lubbock, Texas. (AP Photo/Brad Tollefson) 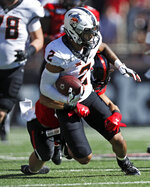 LUBBOCK, Texas (AP) — Jett Duffey has won as Texas Tech's starting quarterback before and has had a 400-yard passing day before. But Red Raiders coach Matt Wells' post-game compliments following Saturday's 45-35 upset of No. 21 Oklahoma State included a different element of the junior quarterback's game.

"Jett Duffey was stingy with the football," Wells said. And turnovers made a huge difference in the game.

Duffey passed for four touchdowns, ran for another and avoided turnovers, which have previously plagued him, in his first start of the season. Alan Bowman started Texas Tech's first two games at quarterback before injuring his non-passing shoulder. Transfer Jackson Tyner started the Red Raiders' previous game at Oklahoma before being replaced early by Duffey, who went 1-2 in three starts last season.

"This was a tough week. It was an emotional week," Wells said. "Nobody was very happy about the way we played last week. I thought they responded. Tremendous amount of guts."

Cowboys coach Mike Gundy pointed to multiple issues that led to defeat, including the possibility that he worked the team, which hasn't yet had an off week this season, too hard during the last two weeks.

"There was a lot of blame to be thrown around - quarterbacks, offensive line, corners, coaches, everybody," Gundy said. "But in the big picture, if you turn the ball over that many times, no matter what forced those turnovers, and if you give up big plays, it's difficult to win."

Gundy cited poor pass protection on Sanders' first two interceptions, in which he threw toward the sideline into tight coverage. Sanders was 22 of 37 passing for 276 yards with touchdowns of 73 yards to Jordan McCray and 10 yards to Tylan Wallace.

After the game, Sanders sat in a stadium tunnel, left hand to his forehead, as he answered questions from the media.

Wallace, who went into play leading Division I averaging 22.07 yards per catch among his 123.6 yards per game, had 11 catches for 85 yards, one touchdown in the closing minutes, and a long gain of 14 yards.

"We had to show the world, like, we can play defense at Texas Tech," Coleman said. "I think it was a big statement we had to prove."

THIRD DOWN NOT THE CHARM

The teams combined to go 0 for 17 on third-down conversions until the closing minutes of the half, when Hubbard took the ball on 3rd-and-1 at Texas Tech's 3-yard line and scored. On one of those Cowboys possessions, a conversion was negated by a blocking penalty on Wallace.

Texas Tech ended a 10-game losing streak at home against ranked opponents since beating No. 24 TCU 20-10 in September 2013 for first-year coach Matt Wells' first conference win. Three of those losses were to the Cowboys.

Oklahoma State is 0 for 2 in the Lone Star State this season, having lost 36-30 at Texas on Sept. 21. Their next chance to return to Texas would be for the conference championship at Arlington's AT&T Stadium.

Texas Tech visits Baylor next Saturday, its first trip to Waco since 2007. The series had been played at neutral sites beginning 2009, with nine games in Arlington and one at the Cotton Bowl stadium in Dallas.