Duggan, TCU blow out Duquesne 45-3 as teams shorten 2nd half 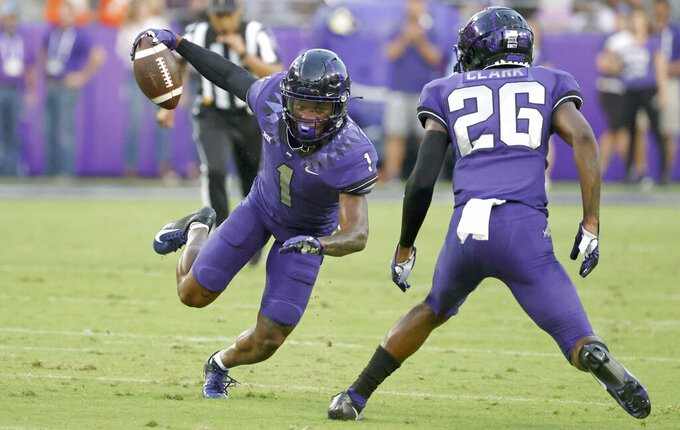 TCU cornerback Tre'Vius Hodges-Tomlinson (1) intercepts a pass as safety Bud Clark (26) looks on against Duquesne during the first half of an NCAA college football game Saturday, Sept. 4, 2021, in Fort Worth, Texas. (AP Photo/Ron Jenkins)

FORT WORTH, Texas (AP) — Max Duggan threw for a touchdown and was one of four TCU players with a rushing score as the Horned Frogs routed lower-division Duquesne 45-3 in an opener shortened in the second half Saturday night.

The coaches agreed to play 12-minute quarters after halftime with the Horned Frogs leading 35-0 in their first meeting with the FCS school. TCU improved to 19-2 in home openers under coach Gary Patterson.

“We’re really, really thin in our depth,” Duquesne coach Jerry Schmitt said. “I was personally concerned because at our level, our backup guys are walk-on Division III-type players. To put some of them in to protect some of the skill guys... I appreciate Gary doing that.”

It was TCU's first non-conference game since 2019 after COVID-19 issues scrapped the only game outside Big 12 play last season along with a bowl appearance.

Duggan, who didn't play in the second half, finished a 90-yard drive on the opening possession with an 8-yard run. His 16-yard pass to J.D. Spielman finished the first-half scoring. The junior and third-year starter was 14 of 19 for 207 yards.

“It was good for us to get started fast and stay on them,” Duggan said. “We didn’t want to play sloppy and make errors. Obviously my mistake of the interception, I’ve got to get that fixed. Other than that, it was a good half.”

The only Duggan-led drive not resulting in points came when he was intercepted by Leandro DeBrito the play after his longest completion, a 47-yarder to Derius Davis.

Duquesne quarterback Joe Mischler injured a knee early late in the first quarter as the Dukes finished with 137 yards and six first downs in their return from a short offseason after playing a five-game schedule in the spring because of the pandemic.

“I just feel bad because of the quarterback situation for them,” Patterson said. “Their coach and I talked before the game and on the phone earlier in the week about getting out of this game and making sure everybody stayed healthy.”

Duquesne: This was by far the best FBS program the Dukes have faced since joining FCS in 1993, and it showed. They were down 28-0 before picking up a first down without the benefit of a penalty. “It’s a great experience,” Schmitt said. “We stretched ourselves obviously and our kids got to see that challenge."

TCU: It was the perfect tune-up for the Horned Frogs. Two quarterbacks got to play in the second half in Matthew Downing and Chandler Morris. The son of former SMU and Arkansas coach Chad Morris threw a 20-yard touchdown pass to Blake Nowell in the fourth quarter. There were 10 players with at least one carry, and 10 with at least one catch.

“You’re only playing 30 or 40 plays instead of 70, 80 plays and not taking a pounding, that’s a big deal,” Patterson said. “We rotated a lot of defensive linemen and got ready to play.”

It was the 19th victory in the past 20 home openers for Patterson. His home debut as head coach 20 years ago? Well, that was a 27-24 overtime loss to lower-division Northwestern State. There was never a need to worry about a repeat.

Duquesne is now 7-8-1 all-time against current members of the Big 12. But this is the first time the Dukes have played one of those schools in 79 years. The most recent meeting was a 33-0 victory over Kansas State in 1942. Eight of those 16 games have been against West Virginia, which holds a 4-3-1 edge in a series last played in 1935.

Duquesne: Another FBS opponent in Ohio next Saturday. The Dukes opened with consecutive higher-division foes in 2018, and are scheduled to do the same in 2022. Last year's pair of FBS openers was canceled by the pandemic.

TCU: Cal visits next Saturday in the second of four straight home games to open the season. That has happened just once before in program history.