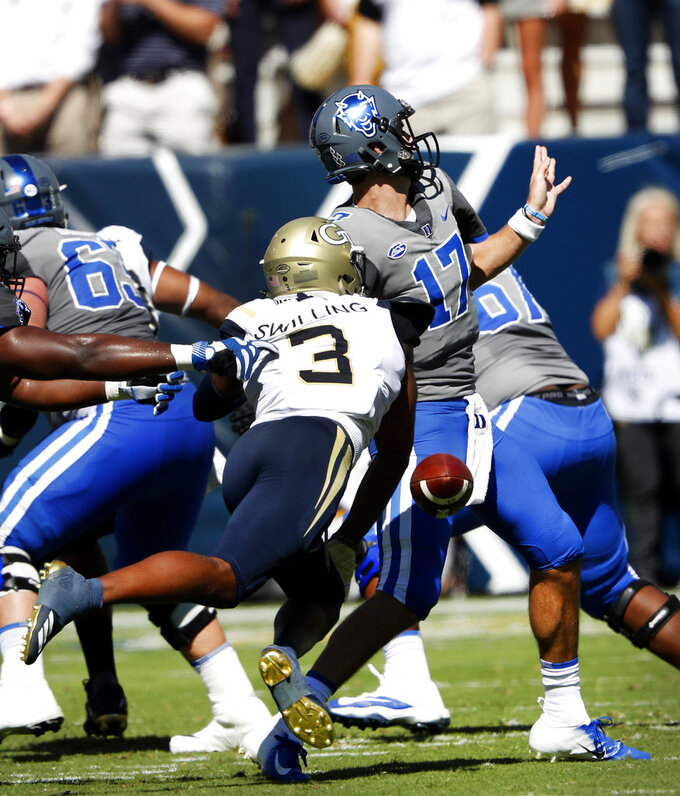 Duke quarterback Daniel Jones (17) has the ball stripped by Georgia Tech defensive back Tre Swilling (3) as he attempts to pass during the first half of the an NCAA college football game, Saturday, Oct. 13, 2018, in Atlanta. (AP Photo/John Bazemore) 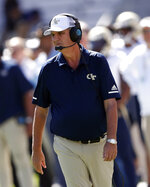 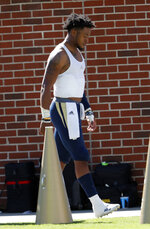 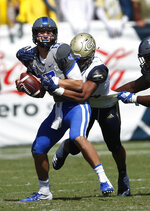 Jones threw three touchdown passes, all in the decisive span late in the third quarter, and Duke contained the nation's top running attack to beat Georgia Tech 28-14 on Saturday.

"We wanted to force some turnovers and really that changed the game," said Duke safety Dylan Singleton.

The game was tied before the flurry of fumbles converted to touchdowns gave Duke (5-1, 1-1 Atlantic Coast Conference) a 28-7 lead.

"It was the game," said Georgia Tech coach Paul Johnson. "You can't turn the ball over on three straight plays and expect to beat anybody ... You're not going to come back from that."

Georgia Tech (3-4, 1-3) couldn't maintain its offensive momentum after scoring more than 60 points in back-to-back wins over Bowling Green and Louisville.

The Yellow Jackets were held to 229 yards rushing, 144 below their nation-leading average.

Jones' 48-yard scoring pass to T.J. Rahming followed the first of Georgia Tech's rapid-fire lost fumbles, this one by running back Jerry Howard. Officials ruled Howard down before the fumble, but the call was overturned in a video review. The fumble was forced by Axel Nyembwe and recovered by Chris Rumph II.

"It's how we play our best, to blend defense, the kicking game and offense," said Duke coach David Cutcliffe. "That was a storm, it wasn't a blend."

"I'm not sure what happened, but that's unacceptable and we're going to fix it as a team," Howard said.

Georgia Tech's only first-half touchdown, a 32-yard pass from Marshall to Malachi Carter, was set up by Lamont Simmons' interception. Jones was pressured and appeared to be trying to just throw the ball away.

Marshall had 16 carries for only 41 yards before leaving the game in the fourth quarter with an apparent shoulder injury. "It was sore and we didn't want to put him back in," Johnson said.

Duke: The Blue Devils had an impressive answer to their first loss of the season to Virginia Tech on Sept. 29. Duke, third in the ACC in scoring defense and fifth in total defense, contained Georgia Tech's spread option attack. Aside from his poor first-half pass that was intercepted, Jones avoided mistakes and capitalized when the Yellow Jackets suffered their sudden spree of turnovers.

Georgia Tech: The two-game offensive surge against Bowling Green and Louisville now looks like a blip on the Yellow Jackets' schedule. The offense was held to no more than 21 points in ACC losses to Pittsburgh and Clemson and again was underwhelming against Duke. The Yellow Jackets again will be playing to try to save their season when they play their next two games on the road against Virginia Tech and North Carolina.

Duke has four wins in its last five games against Georgia Tech, including two straight. Cutcliffe said his preparation for the Yellow Jackets' option offense begins in the spring.

"We do a good job of making it familiar for our players year-round," Cutcliffe said. "It's a playbook. It literally is a system and we teach the system to our kids in the spring. ... Then I think we do a good job of simulating their offense in practice."

Former Georgia Tech player and coach Bill Curry was an honorary captain on homecoming and was on the field for the opening coin toss.

Georgia Tech's Victor Alexander was ejected for throwing punches in an altercation with Duke's Brandon Feamster, who lost his helmet. Others players also were involved. Georgia Tech coaches pulled Alexander to the sideline, and each team was penalized for unsportsmanlike conduct.