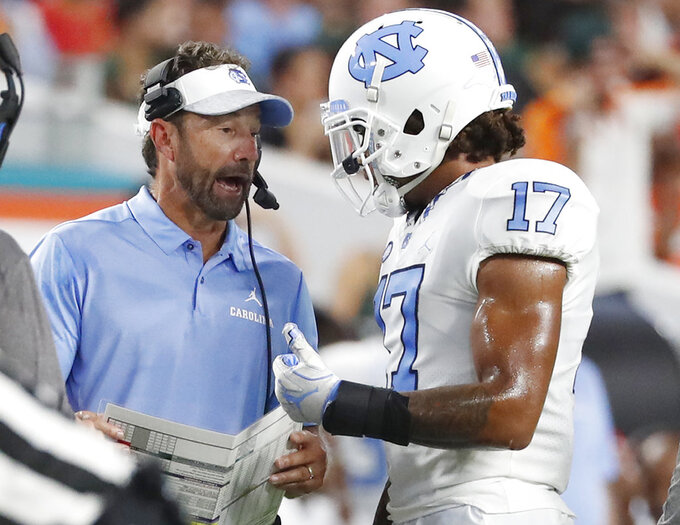 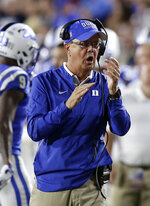 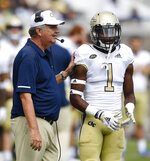 Things to watch in the Atlantic Coast Conference in Week 7:

Duke at Georgia Tech. This matchup of the ACC's longest-tenured head coaches — both Duke's David Cutcliffe and Tech's Paul Johnson have been on the job since 2007 — shapes up as the best game of a sparse weekend in which five schools are idle. The Blue Devils (4-1, 0-1) had a week to dwell on, and fix the mistakes from, a home loss to Virginia Tech that cost them their first national ranking since 2015, and it's always welcome to have an extra week to prepare for the Yellow Jackets' triple-option offense. Georgia Tech (3-3, 1-2) climbed back to .500 by routing Louisville 66-31 while rushing for a season-best 542 yards, and has reached the 60-point mark in consecutive weeks.

Virginia QB Bryce Perkins vs. Miami's defense. Perkins has become quite a playmaker for the Cavaliers (3-2, 1-1), ranking second in the league with an average of 293 total yards, and his four interceptions are the second-fewest among ACC quarterbacks who have started all season. He'll face a test from arguably the league's best defense — Miami (5-1, 2-0) allows averages of 237 total yards and 137 yards passing.

Clemson coach Dabo Swinney says this year's team is more explosive than last year, and the numbers back that up. The fourth-ranked Tigers have run 17 plays that gained at least 40 yards, and 12 that went for 50 or more yards — and they lead or share the national lead in both categories. Six of their nine touchdowns last week against Wake Forest were from 50 or more yards out.

Maybe Pittsburgh can pick off another undefeated, top-five team with College Football Playoff aspirations. The Panthers (3-3, 2-1) are three-touchdown underdogs to No. 5 Notre Dame (6-0), are coming off a high-scoring victory over Syracuse and have fresh memories of last year's season-ending win over unbeaten Miami. After consecutive victories over nationally ranked teams Stanford and Virginia Tech, perhaps the Irish are due for a letdown.

North Carolina receiver Anthony Ratliff-Williams is worth keeping an eye on against Virginia Tech. Ratliff-Williams ranks sixth in the league in all-purpose yardage (113.3 ypg) but hasn't had the kind of breakout performance that made him the bright spot in a dismal 2017 season for the Tar Heels. Not often have such big games come against the Hokies, but this might be the exception: They have the ACC's worst pass defense, allowing 297 yards per game.