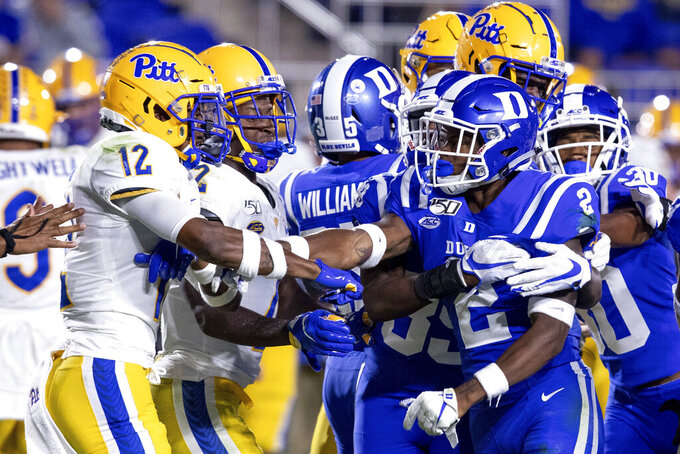 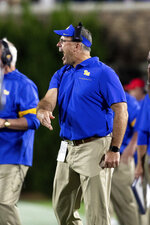 The Blue Devils (3-2, 1-1 Atlantic Coast Conference) look for their sixth win in seven years against the Yellow Jackets (1-4, 0-2) when the Coastal Division rivals meet Saturday.

A key for Duke will be how effectively it can put last week's loss to Pittsburgh behind them. The Blue Devils rallied from a 23-point deficit late in the third quarter and took a four-point lead with 1:30 remaining, only to have the Panthers rally for a 33-30 victory — their fifth in a row in the series.

"You have to play well at home, and we have to play extremely well to be able to beat a good Georgia Tech team," coach David Cutcliffe said. "There's nothing to look at in the rear-view mirror. This is the first of an opportunity to play six more league games."

The Yellow Jackets have had plenty of practice putting disappointment in the past. They've lost three in a row, including an overtime defeat against The Citadel of the FCS, and their only victory came against a South Florida team that had lost its previous eight games.

This was always going to be a difficult transition from Paul Johnson's option-oriented offense to new coach Geoff Collins' pro-style scheme, which has made the entire season an exercise in patience.

And while they are coming off a 38-22 loss to North Carolina, they found some things to build upon: They gained a season-best 321 total yards and they averaged 6.1 yards per play — their best performance against a team from the Bowl Subdivision.

"We talk about going 1-0 every week and 1-0 every day," Collins said. "Everything in the program matters. We just focus on the improvement and the results will take care of themselves. You can't look in the past. All you can do is learn from it. I think our guys have adopted that attitude and they go out there with unbelievable attitude."

Some other things to know about the Georgia Tech-Duke game:

The Blue Devils have yet to face Collins but they have previously prepared for his system during the 2018 postseason. Collins' team at Temple earned an invitation to the Independence Bowl to face Duke and the Owls continued to run his scheme after he was hired by Georgia Tech in December. Duke shut Temple out in the second half of a 56-27 victory.

Georgia Tech redshirt freshman James Graham certainly looked comfortable at quarterback. He was 11 of 24 for 171 yards with two touchdowns and two interceptions in his first start of the season last week against North Carolina. His 219 total yards were the most by a Yellow Jackets QB this season.

A team figures to once again run the option offense in a Georgia Tech-Duke game — but for a change, it's the Blue Devils and not the Yellow Jackets. Duke occasionally has sprinkled some triple-option plays into its game plans this season, breaking them out in the opening loss to Alabama and using them to fuel the comeback against Pitt.

The Blue Devils will need to take better care of the ball after turning it over six times in the Pitt loss, with QB Quentin Harris responsible for five of those giveaways. It was just the third time since 2000 that Duke had six turnovers in a game — and not surprisingly, the Blue Devils were 0-3 in them.