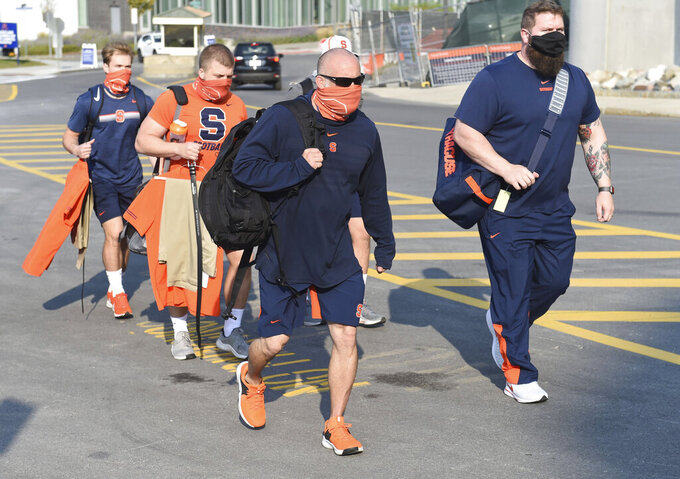 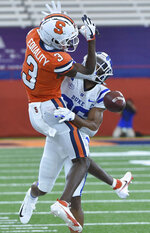 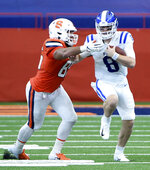 SYRACUSE, N.Y. (AP) — Duke coach David Cutcliffe did what he expected to do after that elusive first win — he danced with his team in a locker room full of joy.

Chase Brice threw for two touchdowns, Mataeo Durant rushed for 163 yards and two more scores, and Deon Jackson rushed for a career-high 169 yards as Duke held off Syracuse 38-24 on Saturday.

Duke (1-4, 1-4 Atlantic Coast Conference) won despite three lost fumbles and an interception, but Syracuse (1-3, 1-3) only turned the mistakes into seven points. The Blue Devils entered the game with 15 turnovers, the most in the nation, while Syracuse was second nationally in turnovers gained with 10.

“I think we all have been waiting for that moment,” Cucliffe said afterward. “I can't tell you the joy in my heart. There was a lot of emotion in that locker room. It's a difficult time. It's tough. It's a pandemic. Things don't go well, but nobody's jumped ship."

On this day all the mistakes finally didn't matter for the Blue Devils, who used the backfield tandem of Jackson and Durant to wreak considerable havoc while the Syracuse offense sputtered against Duke's imposing front line. Syracuse managed just 28 yards rushing to Duke's 363.

Duke's 645 yards of total offense is a high under Cutcliffe.

Orange quarterback Tommy DeVito never found any sort of rhythm, misfiring repeatedly on long throws, and failed to capitalize on any of the turnovers. He finished 13-of-26 passing for 255 yards and two touchdowns. He was injured when sacked — for the fifth time — early in the fourth quarter and replaced by Rex Culpepper.

“The difference today is thank goodness we won the fourth quarter and the second half for the first time," Cutcliffe said. "We answered scores. We won third down (12 of 17) and we physically dominated the line of scrimmage.”

Duke came from behind with two touchdowns late in the second quarter to gain a 24-14 halftime lead. Durant's 15-yard run and Brice's 52-yard pass to Jarrett Garner with a minute to go sapped some energy from the Orange after a big play by its defense in the first minute of the quarter.

Brice lost the ball when he was hit from behind by Cam Jonas and Orange linebacker Geoff Cantin-Arku scooped it up and returned it 28 yards for a touchdown and a 14-10 Orange lead.

Brice, who finished 22 of 38 for 270 yards, one yard off his career high, left the game for a series, then returned to lead the Blue Devils to the win.

“I thought I had a lot of emotions, nerves," Brice said. "When I got to go back in I settled back down.”

Syracuse closed to 27-21 in the third when DeVito hit tight end Luke Benson on the left side for a 53-yard score, but the expected momentum never materialized.

“We’ve just got to pick them (the younger players) up, make sure they know that you can learn from everything," Benson said. “You’ve got to learn from this loss and move on to next week.”

Charlie Ham added his third field goal, a 21-yarder, late in the third for a 30-21 lead and Andre Szmyt responded with a 48-yarder for the Orange with just over 10 minutes left in the fourth. Durant sealed it with a 3-yard run late.

Duke took the opening kickoff and marched quickly downfield, scoring in seven plays, capped by Brice's pretty 26-yard toss to Jalon Calhoun on a crossing pattern. Jackson ripped off a 20-yard run early in the drive to set the tone for the game for the Blue Devils, who repeatedly racked up big gains on the ground in the first half.

“We feel like we can run on any team we play," said Jackson, who had a 50-yard run. "We all came in with the determined mindset that we were going to be physical and were going to run it down their throat.”

Syracuse struck back in two plays as DeVito hit Taj Harris in stride down the right side for a 79-yard touchdown.

Last year, Syracuse rushed for 286 yards in a 49-6 win at Duke. On this day, the ground game belonged to Duke, which limited Syracuse to 1.2 yards per carry and just 11 first downs.

“It’s a great feeling. We’ve been close," said Brice, whose one shining moment before Saturday was leading Clemson to a comeback victory over the Orange two years ago after Trevor Lawrence was injured. “I thought we clicked last week and this week we finished."

Syracuse was coming off a bye week after its first win of the season, 37-20 over Georgia Tech in the first game in the refurbished Carrier Dome.

Duke: The Blue Devils finally demonstrated they can win despite mistakes, but the three lost fumbles and one interception Saturday indicate that's still a problem. The backfield tandem of Jackson and Durant creates problems for opponents.

Syracuse: The Orange finally found that missing link in the run game in the previous game with freshman Sean Tucker, who rushed for 112 yards and two scores against Georgia Tech two weeks ago, but he was not a factor against Duke. The Orange offense needs better balance. Not being able to take advantage of the turnovers doomed them.

Duke is at North Carolina State next Saturday.

Syracuse continues a four-game homestand with a game against Liberty next Saturday.