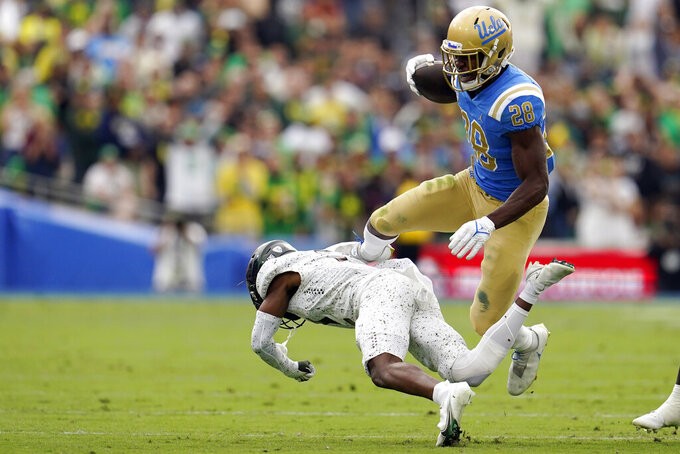 UCLA running back Brittain Brown (28) leaps over an Oregon defender during the first half of an NCAA college football game Saturday, Oct. 23, 2021, in Pasadena, Calif. (AP Photo/Marcio Jose Sanchez)

PASADENA, Calif. (AP) — Anthony Brown and No. 10 Oregon aren't garnering style points , but in a season where the College Football Playoff picture remains murky at best, they keep on getting key victories.

Brown had a season-high 381 yards of offense and Travis Dye became the first player in Football Bowl Subdivision history to score touchdowns on four consecutive carries as the Ducks held on for a 34-31 victory over UCLA on Saturday.

Despite remaining the Pac-12's highest-ranked team, coach Mario Cristobal said the only thing the Ducks are focused on is what happens each week.

“I think we’re over that stuff. I’m being 100% transparent. They understand it is about today and the next item on the agenda. When we get away from that process, we create our own issues,” said Cristobal after the Ducks improved to 6-1 overall and 3-1 in the conference. “All in all, a great team victory against a really good football team."

Of Oregon's six wins, four are by seven points or less. It appeared like that wasn't going to be the case early in the fourth quarter when Brown's 43-yard TD run on a quarterback draw extended its lead to 34-17 before the Bruins rallied.

Brown bounced back after hearing boos at home during last Friday's 24-17 win over Cal. He had a season-high 296 yards, completing 29 of 39 passes, along with had six carries for 85 yards. The graduate transfer said he did reach out to people after last week's struggles, which helped him get back on track.

“I should have been playing like this for a while, but the fact that it came in a big moment was important," said Brown, who completed passes to 11 players.

Dye — who finished with 35 yards on 14 carries — also became the seventh Oregon running back since 2000 with at least four rushing touchdowns in a game. Before Dye’s record day, six players shared the mark with TDs on three consecutive carries.

Oregon fell behind 14-0 during the first quarter before scoring on five of its next six drives.

Dye had 5 yards on four carries in the first quarter before scoring on runs of 1 and 4 yards to tie it at 14. The Ducks trailed 17-14 at halftime, but Dye would score from 1 and 5 yards in the third quarter to give Oregon a 27-17 advantage.

Dorian Thompson-Robinson's 2-yard keeper early in the fourth quarter got UCLA within 34-24. After Jordan Genmark Heath's interception on Oregon's ensuing possession, Brittain Brown scored up the middle from a yard out.

UCLA (5-3, 3-2) had a chance to at least tie and send it into overtime after Jay Shaw picked off Anthony Brown's pass in the end zone with 3 minutes remaining. The Bruins drove to the Oregon 39, but Ethan Garbers, who came in when Thompson-Robinson was injured earlier in the drive, had a pass intercepted by DJ James with 48 seconds remaining to preserve the win.

“I needed to just trust in my instinct. I know we needed a play and I put it on the line,” said James, who also had an interception in the first quarter.

Thompson-Robinson was 22 of 41 for 216 yards and a TD, along with 35 rushing yards and a score. Brown added 45 yards and 13 carries and two touchdowns.

“I’ve known this group for a long time. They’re an unbelievably resilient bunch. It’s 34-17, you know, think the game’s over, but our players don’t," said UCLA coach Chip Kelly, who fell to 0-3 against the school he led for four seasons. "That was a game in itself during the fourth quarter. We just came up a little bit short.”

UCLA took the opening kickoff and scored on Brittain Brown's 1-yard run. After Martell Irby blocked Tom Snee's punt and recovered it at the Oregon 30, the Bruins extended their lead to two touchdowns four plays later when Thompson-Robinson connected with Kazmeir Allen on a 5-yard pass.

UCLA had interceptions by Quentin Lake and Devin Kirkwood nullified due to offsides penalties. Oregon would take advantage by scoring on both drives.

“You got to clean those up," Kelly said. "We had two interceptions that we negated ourselves because we weren’t lined up the right way, so we’ll make the corrections when we get back with these guys.”

ALL OVER THE PLACE

Los Angeles native Kayvon Thibodeaux once again wreaked havoc against one of the area schools.

Oregon's dominant sophomore defensive end had two sacks, 4 1/2 tackles for loss and nine tackles, which are all season highs. Thibodeaux's hit on Thompson-Robinson during the fourth quarter ended up knocking the UCLA quarterback out of the game.

“I was able to make the plays that came to me. It was not my best, but a good game so far. We still have some climbing to do,” Thibodeaux said.

Oregon: The Ducks came into the game allowing 139.9 rushing yards per game, but held UCLA's high-powered rushing attack to 110 yards and only 2.4 yards per carry.

UCLA: The Rose Bowl has been far from hospitable lately for the Bruins. This is their third straight loss at home, while they are unbeaten in three road games.

UCLA: At Utah next Saturday.