Dykes seeks another DFW rivalry win, for TCU instead of SMU 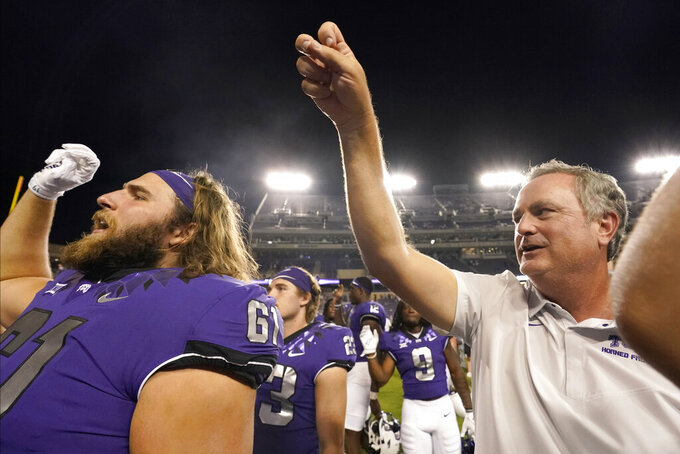 TCU head coach Sonny Dykes, right, holds up his hand during the school song with offensive lineman Riley Self (61) and other teammates on the field after an NCAA college football game against Tarleton State in Fort Worth, Texas, Saturday, Sept. 10, 2022. (AP Photo/LM Otero)

Line: TCU by 2 1/2, according to FanDuel Sportsbook.

This is the 101st game in the Dallas-Fort Forth rivalry known as the “The Battle for the Iron Skillet.” The game is sold out. SMU has won back-to-back games in the series for the first time 1992-93. Sonny Dykes, the coach for the Mustangs in those two victories, is now on the other side. The Frogs won at Colorado and beat Tarleton before last week's open date, making Dykes the first new TCU coach since Dutch Meyer in 1934 to start 2-0. SMU had three turnovers in a 34-27 loss at Maryland last week.

SMU receiver Rashee Rice, who leads the nation with 491 yards receiving (163.7 per game), against Tre'Vius Hodges-Tomlinson and the TCU secondary. Rice set career highs last week with 11 catches for 193 yards, though he was held out of the end zone after three TD catches the first two games. The Frogs have allowed only two TD passes, and have two interceptions.

TCU: QB Max Duggan is the national leader in passing efficiency with his 239.2 rating. He has completed 25 of 32 passes (78.1%) for 417 yards with five touchdowns and no interceptions. He is set for his 31st start for the Frogs. Chandler Morris, the son of former SMU coach Chad Morris, started TCU's opener but is still out with a sprained left knee suffered in that game.

SMU: QB Tanner Mordecai has already thrown 10 TDs this season, after 39 last season under Dykes. Mordecai has 1,013 yards passing with at least three TDs in each game this year. He had four TDs and three interceptions against TCU last year.