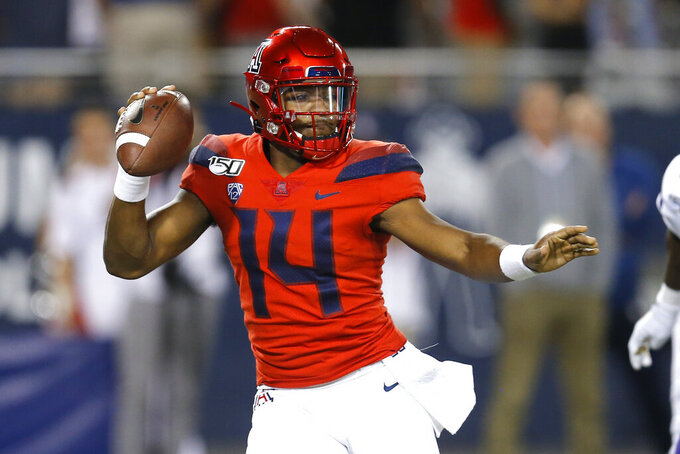 TUCSON, Ariz. (AP) — Jacob Eason and the Washington offense had struggled for the better part of two games by the time the quarterback saw Aaron Fuller sprinting toward the front corner of the end zone. Then came a beautifully-thrown ball over Fuller's right shoulder for a 22-yard touchdown.

Eason threw for 243 yards and two touchdowns, Salvon Ahmed ran for three touchdowns and Washington rallied in the second half to beat Arizona 51-27 on Saturday night.

It was an impressive bounce back win — especially for the offense — after a deflating 23-13 loss to Stanford the week before.

"We know how we can play football," Eason said. "Some guys stepped up. We played our brand of football in the second half and it showed today."

The Huskies left little doubt about the outcome early in the fourth quarter after two good throws by Eason.

The first was a 39-yard completion to Jordan Chin over the middle of the field and the second was the 22-yarder to Fuller that led him into the corner of the end zone, just inside the pylon.

If was quite the offensive performance after a rough first half. Washington finished with 207 yards rushing, including 106 yards by Sean McGrew and another 95 from Ahmed.

"Credit to the kids," Washington coach Chris Petersen said. "There wasn't a lot to say. They just knew it wasn't good enough. We couldn't get into any sort of rhythm. We'd have a penalty, a false start, or wouldn't make a play.

"We knew if we could stay on the field, we would get a rhythm going."

Arizona (4-2, 2-1) had its four-game win streak snapped. Khalil Tate threw for 184 yards, one touchdown and one interception. He couldn't find any of his usual running room and finished with minus-28 yards on the ground.

The Wildcats were hurt by four turnovers, including three lost fumbles.

"You can't play a team of that caliber and turn it over that many times," Arizona coach Kevin Sumlin said.

Washington jumped to a 13-3 lead midway through the second quarter after Tate fumbled while scrambling. Linebacker Brandon Wellington scooped up the bouncing ball and ran it in for a 5-yard touchdown.

Arizona bounced back on the ensuing drive when Tate hit Jamarye Joiner for a 40-yard touchdown pass. The Wildcats scored again on J.J. Taylor's 1-yard run, capping a nine-play, 68-yard touchdown drive just before halftime for a 17-13 lead at the break.

Washington made a few big plays on special teams in the first quarter but squandered a chance to take a big early lead.

Huskies' defensive lineman Levi Onwuzurike burst through Arizona's defensive line to block a punt on the first drive of the game. Washington didn't score on the ensuing drive, but it did give the Huskies good field position that eventually resulted in a 3-0 lead.

Later in the quarter, a Washington punt bounced off Arizona's Thomas Reid III, who was trying to make a block in front of the punt returner. The Huskies recovered at Arizona's 8-yard line but had to settle for another short field goal and a 6-0 advantage.

Washington linebacker MJ Tafisi was taken off the field on a stretcher late in the third quarter after making a tackle. He was strapped down and had his face mask removed but was moving his arms and waved at the crowd as the cart drove off the field.

Peterson said Tafisi was moving at the hospital and doctors were "doing the final checks" and making sure "they're not missing anything." He hoped Tafisi would be able to go home with the team.

Washington: The Huskies are still inconsistent on offense, but Eason made a few good throws in the second half in important moments. The defense put constant pressure on Tate, forcing him into some bad decisions. If Washington can keep up that combination against other teams, it could string some wins together in the second half of the season.

Arizona: The Wildcats couldn't capitalize on the momentum they gained in the second quarter and the team's three lost fumbles hurt. Tate rarely looked comfortable and the Wildcats' offense really struggled without him as a running threat.

Washington has a decent shot at jumping back into the rankings after the win. The Huskies received 54 points in last week's poll, which was four spots out of the Top 25. Arizona was getting some interest, too, but that probably ends after the loss.