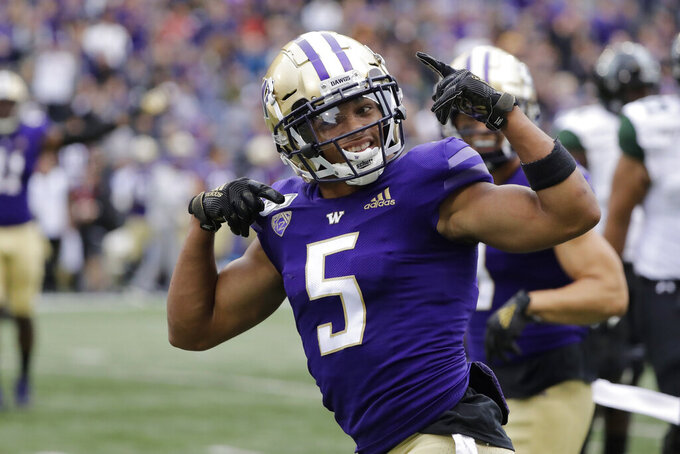 Washington defensive back Myles Bryant celebrates after he intercepted a pass against Hawaii during the first half of an NCAA college football game, Saturday, Sept. 14, 2019, in Seattle. (AP Photo/Ted S. Warren)

SEATTLE (AP) — After just three plays, Hunter Bryant was celebrating in the end zone. Five plays later, it was Sean McGrew's turn. And after another seven snaps, it was Puka Nacua catching his first collegiate pass for a touchdown.

It didn't take long for No. 23 Washington to put last week's surprising home loss in the past.

Jacob Eason threw a 47-yard touchdown pass to Bryant on the third play of the game and added two more and Washington rebounded with a 52-20 romp over Hawaii on Saturday night.

Eason and the Huskies (2-1) overwhelmed the Rainbow Warriors, taking a 21-0 lead in less than 9 minutes. Eason was 18 of 25 for 262 yards, Richard Newton had three short TD runs, and Washington quickly bounced back from last week's 20-19 home loss to California in its Pac-12 opener.

"It always feels good to be in the end zone quick," Eason said. "Last week we struggled with some things and this week we got to jump on it early. That just shows how well we can bounce back and respond to adversity."

While the final numbers look impressive, Washington did what was expected. Other than showing it could respond to last week's setback, answers about how good the Huskies are will come the next three weeks with games at BYU, vs. USC and at Stanford.

Hawaii (2-1) was looking to beat three Pac-12 opponents in a season for the first time in school history. The Warriors opened with wins over Arizona and Oregon State at home, but the first trip away from the island was a quick slap of reality.

Hawaii coach Nick Rolovich jokingly tweeted out a picture of the Rose Bowl logo last week after beating the Beavers. He had to admit the Warriors aren't ready for Pasadena.

"Coach Pete had his guys ready. We knew it was going to be a challenge. I would have liked to have seen us get to the fourth quarter and make it a game but it got out of hand pretty early," Hawaii coach Nick Rolovich said. "I don't think we're ready for the Rose Bowl."

Cole McDonald was 22 of 35 for 218 yards and a touchdown, but was also intercepted three times.

Bryant's TD catch was the beginning of Washington's early onslaught. Myles Bryant came up with Washington's first forced turnovers on Hawaii's second offensive play, stepping in front of McDonald's pass for the first of his two interceptions in the first half. Washington made it 14-0 moments later on McGrew's 22-yard TD run, and it was 21-0 when Nacua's first career catch was a 28-yard TD on a perfectly placed throw from Eason.

Eason's best TD throw was his last one, hitting Aaron Fuller on a 37-yard TD early in the second quarter, placing the deep post ball just out of the reach of the defensive back.

"It's just really nice to be able to build a lead," Washington coach Chris Petersen said. "I don't think that happens most every game and I think that was really important for this game because Hawaii can score."

It wasn't until nearly halftime before Hawaii's offensive finally woke up. After going scoreless on their first six possessions, the Warriors scored on back-to-back series on either side of halftime. Miles Reed recovered his own fumble in the end zone shortly before half for Hawaii's first points. Reed scored on a 7-yard TD run on the opening drive of the second half.

McDonald hit Cedric Byrd II on a 4-yard TD pass late in the third quarter to pull Hawaii within 38-20 but that was as close as the Warriors would get. Newton's second TD run early in the fourth quarter pushed the Huskies lead back to 25.

"This was a good barometer for us and we got some more work to do," Rolovich said.

Washington: Hunter Bryant has quickly developed into Eason's favorite target. The tight end had five catches for 115 yards. His most important may have been a 20-yard reception on third-down late in the third quarter after Hawaii had scored 20 straight points.

With losses by Michigan State and Maryland, expect Washington to climb a couple of spots in the AP Top 25 next week.

Washington: The Huskies hit the road for the first time this season, traveling to BYU next Saturday.