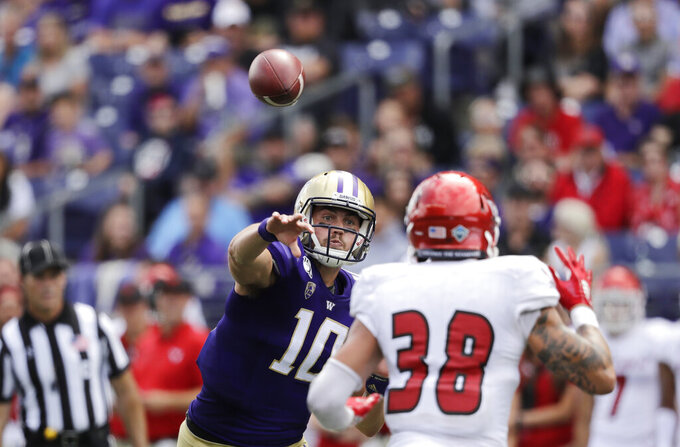 SEATTLE (AP) — Of all the throws Washington's Jacob Eason made playing his first game in nearly two years, the most impressive was one which hit the ground.

It was a heave that traveled 60-plus yards in the air and while it was an incompletion, it showed off the big arm Eason brought back from Georgia and left the home crowd buzzing.

"I swear to you it came from heaven," said Aaron Fuller, the intended receiver on the play. "All I saw was it went into the clouds and then it came down and I was just like 'wow.'"

Eason had more than a few wow moments on Saturday, throwing for 349 yards and four touchdowns, and No. 13 Washington opened the season with a 47-14 win over Eastern Washington.

Taking his first snaps since the 2017 season when he lost the starting job at Georgia to Jake Fromm, Eason showed no rust, carving up one of the top FCS programs in the country with a debut that will only increase the hype around the former No. 1 recruit in the country.

"I was eager to see what he would do because I haven't seen him play and been in games, and things like that," Fuller said. "There was maybe a small bit of doubt just to see how he would control the offense and things like that but I never doubted his arm or his upside. It was cool to see."

Eason completed 27 of 36 passes and led Washington (1-0) on touchdown drives on four of its first five possessions.

"It was fun to do and fun to be a part of and super exciting for me," Eason said.

Eason's fourth pass in purple was a 50-yard touchdown strike to Andre Baccellia. Eason added a 7-yard TD pass to Fuller, who made a stunning one-handed catch while getting a foot inbound, and capped his first-half with a 10-yard TD strike to Chico McClatcher late in the first half.

Fuller caught his second TD on the opening drive of the second half on a perfect back-shoulder throw from Eason, tapping his toes as he fell out of bounds.

"On some of those I saw I was shocked like, 'man, that was a nice catch,'" Eason said. "It's just awesome to have guys like that to throw to."

This was a far different situation than the previous two times the Huskies and Eagles faced off. In 2011, Washington needed a late end zone interception to hold off Eastern Washington 30-27, and three years later in head coach Chris Petersen's first home game, the Huskies held on for a wild 59-52 victory.

"It was a good day one." Petersen said. "I don't want to move on too fast but the challenge is going to be a lot different next week."

After playing in the FCS national championship game last January and falling to North Dakota State, the Eagles were simply overmatched by Huskies this time around.

Richard Newton rushed for a 23-yard touchdown on Washington's first possession and Salvon Ahmed added a 1-yard plunge in the third quarter to give the Huskies a 42-7 lead.

Eastern Washington (0-1) quarterback Eric Barriere was 21 of 35 for 211 yards, but was sacked four times. Barriere threw a 64-yard touchdown to Andrew Boston late in the first half and Antoine Custer Jr. ran for a 4-yard TD in the fourth quarter.

"We didn't play our best game today so I'm excited to see that unfold throughout the year to be better, but I wish we would have given them a better game for both parties," Eastern Washington coach Aaron Best said. "I don't think we executed well. In pockets we did but for the most part we didn't and Jacob Eason is the real deal."

Baccellia's TD catch was his first since the first game of his college career in 2016 against Rutgers. Baccellia caught a 4-yard TD on the second reception of his career and had 76 catches in the following 35 games without finding the end zone before breaking free for the long TD pass from Eason in the first quarter.

Eastern Washington: The Eagles can take solace in rolling up 274 total yards against Washington's defense and should continue to be one of the top teams in the Big Sky this season. ... Boston finished with six catches for 112 yards.

Washington: There is one major concern for the Huskies coming out of the opener and it's the health of preseason all-American center Nick Harris. Harris went down with an apparent left leg injury in the first quarter after getting caught up in a pile. Harris was grabbing in the area of his knee and walked off the field with some assistance. He remained on the sideline during the rest of the game but without his helmet. He was replaced by Matteo Mele.