Easy as QBs1-2-3: BYU auditions trio to step in for Wilson 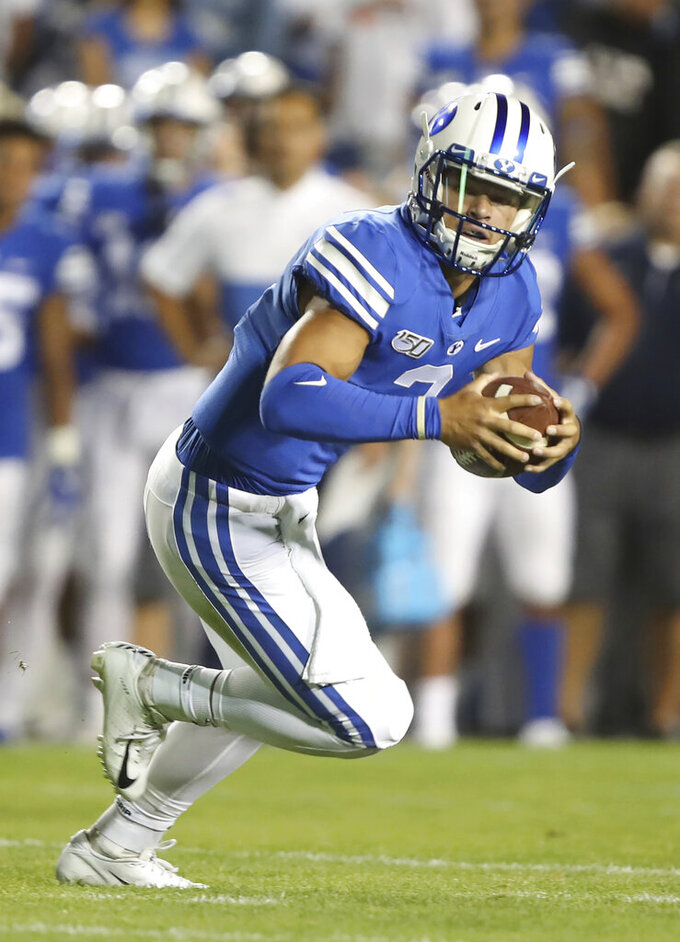 FILE - In this Thursday, Aug. 29, 2019, file photo, BYU quarterback Jaren Hall rolls out in the first half during an NCAA college football game against Utah in Provo, Utah. The BYU quarterback who steps in for Zach Wilson this season may just be from out of left field. That's only because Jaren Hall did play some outfield on the Cougars baseball team.(AP Photo/George Frey, File)

The BYU quarterback who steps in for Zach Wilson this season just may be from out of left field.

That's only because Jaren Hall played outfield on the Cougars baseball team.

It's a three-QB race to replace Wilson, who was selected No. 2 overall by the New York Jets in the 2021 NFL draft.

Hall and Baylor Romney bring the experience, and freshman Jacob Conover a big arm, in a close race that's coming down to the wire. Wilson will be a difficult act to follow after he helped lead the Cougars to an 11-1 record in 2020 and a No. 11 ranking in the final AP Top 25 poll. He also finished eighth in the Heisman Trophy voting.

When recently asked about possibly being QB1, Hall simply responded: “My mindset is to go win against Arizona.”

That would be BYU’s opening opponent on Sept. 4, which is part of the inaugural Las Vegas Kickoff Classic at Allegiant Stadium.

Coach Kalani Sitake hasn’t tipped his hand over who may be under center.

“If you’re having a difficult time like we are, it means that you have a really good group,” Sitake said.

Hall saw action in seven games in 2019 — two starts, with Wilson sidelined by a fractured thumb — and threw for 420 yards along with one score. He also rushed for 139 yards and three TDs. He left the game on Nov. 2, 2019, at Utah State due to a concussion.

When Hall went out, Romney stepped in. Romney started the next game before Wilson returned.

Those are lofty numbers to replace.

Romney threw for 261 yards and one touchdown last season. Conover is a highly touted freshman who starred at Chandler High School in Arizona, where he threw for more than 10,000 yards and 102 touchdowns. He was also recruited by the likes of Alabama, Arizona State, Arizona, Northwestern and Ole Miss.

The 6-foot-1, 205-pound Hall took a medical redshirt season in '20. He also called timeout on baseball to help him focus on the football field.

“I haven’t had to go off and spend hours to do something else,” said Hall, who hit .245 with two homers over 30 games on the diamond in 2019 and ’20. “I’m confident it will play into my ability to play faster and play smarter and just be more dialed into the game plan.”

BYU recently announced that Built Brands — a Utah-based company that makes protein snacks — will give the Cougars’ football team the opportunity to be paid to promote its products as part of a name, image and likeness agreement. Scholarship players can earn $1,000.

For walk-ons, players who are not on athletic scholarship, the payment can be equivalent to the cost of a year’s tuition at BYU. The announcement — a video sensation on social media — was an emotional moment for walk-on quarterback Nick Billoups.

“When you walk into the locker room, you can’t tell who’s a star player and who’s a walk-on — you just see a bunch of happy guys, a family,” Billoups said.

The Cougars look to replace eight starters on defense, including linebacker Isaiah Kaufusi and defensive linemen such as Khyiris Tonga and Zac Dawe.

“I know we lost some production and some guys to the NFL, but we feel really good about the guys that are coming back, the size that we have and the reps and experience these guys have," Sitake said. “We’ll just have to prove it on the field.”

Tailback Tyler Allgeier appears on several watch lists following a 2020 campaign that saw him rush for 1,130 yards and 13 TDs.

Lopini Katoa had a productive season in the backfield, too, with five rushing touchdowns and a 5.3 yards per carry average.

The Cougars remain deep at receiver with Neil Pau’u and Gunner Romney leading the way. The tandem combined for 84 catches and 1,370 yards last season.