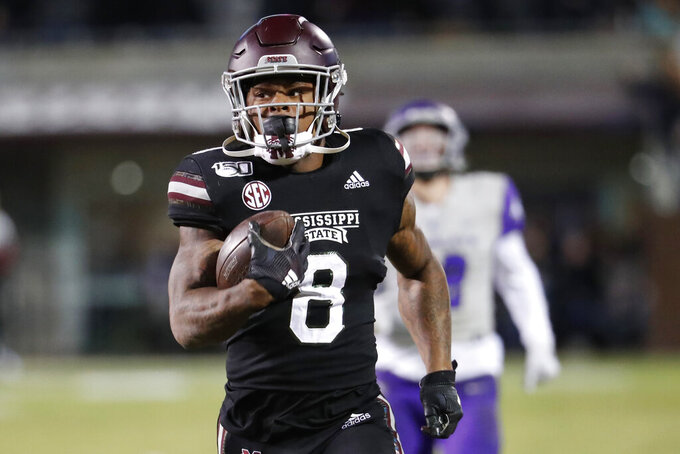 Mississippi State running back Kylin Hill (8) runs past Abilene Christian players on his way to an 88-yard touchdown pass reception during the first half of an NCAA college football game, Saturday, Nov. 23, 2019, in Starkville, Miss. (AP Photo/Rogelio V. Solis)

STARKVILLE, Miss. (AP) — The Egg Bowl will likely be decided by which team best runs the ball — Mississippi or Mississippi State.

That shouldn’t come as a surprise since both teams rely heavily on their rushing attacks.

Hill leads the SEC with 1,215 rushing yards and will need another big performance Thursday as Mississippi State tries to become eligible for a 10th consecutive bowl appearance.

"He is a very good player and does a great job making people miss, breaking tackles, yards after contact, all of those things he is very good at,” Ole Miss coach Matt Luke said.

Luke added that Mississippi State quarterbacks Tommy Stevens and Garrett Shrader also can carry the ball. The Rebels have had to prepare for both; Moorhead said both Bulldogs’ quarterbacks could play Thursday.

There is no 1-2 punch for Ole Miss, Plumlee’s the Magnolia State quarterback who really has made a name for himself lately with his running ability.

"He's fast,” Mississippi State safety Jaquarius Landrews said. “I've never seen a quarterback run like that. He has a lot of confidence in himself and he knows what he's doing. We just have to put a spy on him and play our game in the secondary."

The Bulldogs have rushed for a total of 1,020 yards over their last three games.

Some other things to know heading into Thursday night’s Egg Bowl:

The visiting team in the Egg Bowl has won the past four meetings, including back-to-back Ole Miss victories at Starkville in 2015 and 2017.

The Egg Bowl has long been a heated rivalry and last year's meeting proved it hasn't calmed down much.

Four players were disqualified following the skirmish. Unsportsmanlike penalties were given to every player on the field during the fight.

The Ole Miss offense has been spearheaded by freshmen this season. It hasn't just been Plumlee doing the heavy lifting.

Jerrion Ealy has rushed for 640 yards and five touchdowns. Ealy also has 17 catches for 140 yards and a touchdown.

True freshmen or redshirt freshmen have produced 88.1% of the Rebels’ total offense, a figure that leads all FBS teams.