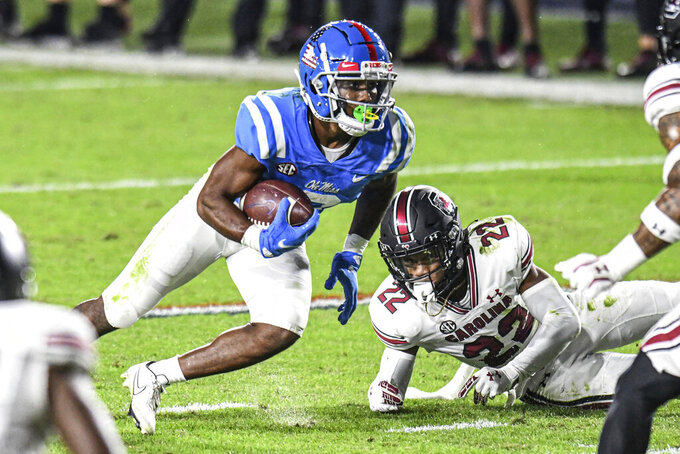 Mississippi wide receiver Elijah Moore (8) gets away from South Carolina defensive back John Dixon (22) during the first half of an NCAA college football game in Oxford, Miss., Saturday, Nov. 14, 2020. (AP Photo/Bruce Newman)

The statistics do a better job of that, anyway.

Mississippi's prolific wide receiver has piled up yards, catches and touchdowns since his infamous Egg Bowl moment. Moore has politely fielded questions about the incident heading into Saturday's rematch with rival Mississippi State.

To recap, Moore's touchdown with four seconds left cut the Rebels' deficit to one point last season pending the extra point. Then came the moment of bad judgment: Moore crawled on all four legs through the end zone and lifted his leg to mimic a dog urinating.

It drew a 15-yard unsportsmanlike conduct penalty and Luke Logan missed the longer extra point attempt that would most likely have forced overtime.

“I feel like I learned a lot,” Moore, who sent a statement apologizing afterward, said this week. “I’m human. I make mistakes. You’ve just got to learn from them and don’t let them happen again. I let my team down. I just know it won’t happen again.”

That ended a season during which Moore was a major bright spot in a sputtering passing game. The 5-foot-9, 185-pounder has thrived even more in the more pass-friendly system of new coach Lane Kiffin and offensive coordinator Jeff Lebby.

Moore leads the nation with 1,054 receiving yards and 74 catches, and his eight touchdowns and 150.6 yards per game also rank in the top 4. No Southeastern Conference receiver has had as many yards through seven games, including LSU's Biletnikoff Award winner Ja'Marr Chase last season.

“He’s a great player, first off," said Kiffin, who has compared him to the similarly-sized former Carolina Panthers wide receiver Steve Smith. "He prepares really well. Very smart player. A lot of players wouldn’t be able to line up outside, inside and in the backfield all in the first series of the game. He’s a true professional.”

Moore has lined up in the backfield at times. He ran for 45 yards against South Carolina while also catching 13 passes for 225 yards and two touchdowns.

It was his third 200-yard game of the season and only Auburn has managed to contain him. Moore had just five catches for 16 yards and a touchdown in that game, but has double-digit receptions every other time out.

He's the only player in the NCAA this season to log 10-plus catches six times.

And Moore insists he never thought about transferring to avoid any backlash from fans after the 2019 Egg Bowl.

“I’m not that type of kid," Moore said. “I don’t just fall out when things get tough. That never really crossed my mind.”

He was a big weapon last season, making 67 catches for 850 yards and six touchdowns. Tailback Jerrion Ealy was the only other Rebels player with more than 13 catches.

He's taken it to another level in Kiffin's system. Despite the shortened season, Moore needs only a dozen catches to break A.J. Brown's single-season school mark of 85 set in 2018.

With even more chances to celebrate this season, Moore has taken a more subdued approach to big plays. He said that's partly intentional and partly just his personality, but knows some people are “probably thinking oh what is he going to do now.”

“I don’t really see any need to celebrate again,” Moore said. “I just give thanks to God and that’s pretty much it.”

“We’ve all pretty much grown in one way or another in a positive way,” Corral said. “I think for him it was just not getting caught up in the moment, taking a step back and realizing what’s going on.

“He was excited at the moment. It is what it is. You can’t change it. But it happened for a reason and here we are now with another opportunity.”